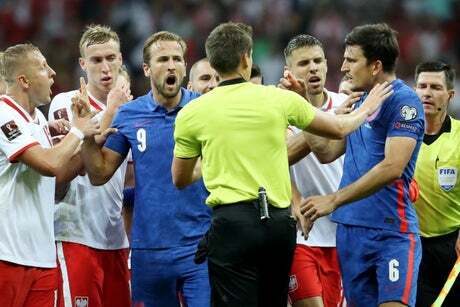 Both teams were caught in a heated on-pitch row as they headed towards the tunnel at the Stadion Narodowy in Warsaw.

Television cameras captured Kamil Glik appearing to pinch Kyle Walker’s neck right in front of referee Daniel Siebert — and the England defender was among those most incensed during the clash.

A report has been submitted to the match officials, with the FA waiting to see what action FIFA, who announced today they are investigating the incident, might take.

After the 1-1 draw, Gareth Southgate said: “We’re getting to grips with what that was. There’s been a report put in and we need to find out a little bit more about what’s happened.

“We’re still gathering all the evidence so there’s no point speculating further.”

Harry Kane added: “There was an incident reported to the FA. They’re investigating and we’ll go from there.

“Allegedly it was something that was done, not said.”

Glik described the incident as “ordinary” and claimed he had tried to shake Walker’s hand afterwards.

“It was an ordinary field jostling,” the Poland defender told TVP Sport. “It all started with a free-kick for us. There was a fight for position, a scuffle. I tried to shake Walker’s hand, but he wouldn’t take it. It was a verbal scuffle, nothing else happened.”

The Poland media officer and team manager, Jakub Kwiatkowski added: “The English FA said there had been a racist remark made but Glik says that is completely not true. I know the players and they have not done that and nor would they. We completely deny any allegations of wrongdoing.”

FIFA, however, are looking into the matter and a spokesperson said: “FIFA is in the process of analysing the official match reports of the FIFA World Cup qualifier match between Poland and England. The relevant information will be assessed by the competent disciplinary bodies in order to decide on next steps.”

The incident follows England’s experiences in Hungary last week when players were subjected to racist abuse from the crowd and pelted with objects. Last night they were once again booed when taking the knee before kick-off.

They remain top of Group I, but Southgate admitted it was an opportunity missed to effectively seal qualification.

“We knew if we could win we were pretty much in Qatar,” he said. “That isn’t the case, we’ve still got some work to do, so that is a disappointment.”

England are four points clear at the top of the group, with games against Andorra, Hungary, Albania and San Marino to play.

Southgate became the first England manager not to bring on any substitutes since Terry Venables in the Euro 96 semi-final defeat by Germany.

He said: “We were in total control. We were going to refresh the wide players at the end but that would have been to run the clock down. Before we could get them in, we’d conceded the goal.

“Once we’d conceded, we didn’t think that was a good moment to make a change.”