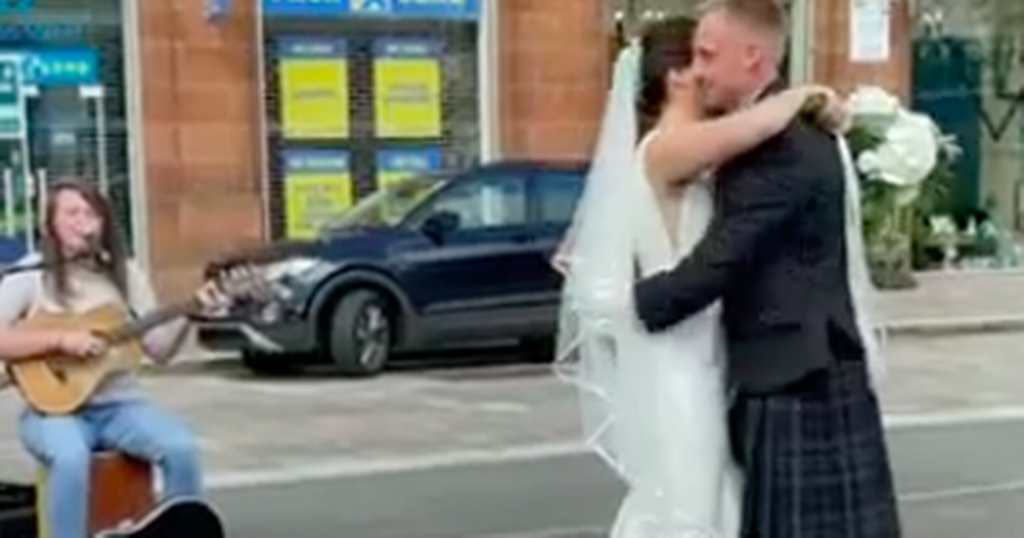 A newlywed couple has left people with 'goosebumps' after they had a first dance on the streets of Glasgow with help from a busker.

Maria McAveety had been setting up to busk outside the busy Festival Village in Merchant City when she was approached by the glowing bride.

The 22-year-old, who often sings at weddings, was more than happy to give them a memorable dance on their wedding day.

The talented musician, from Stepps, told the Daily Record: "I didn't know them, I had just been busking outside the Festival Village in Merchant City. I had just set up and it was the first song I did that day.

"They had just been walking by, I think they were getting married at a hotel up the street, when the bride asked if I could sing them a song.

"So, I finished setting up and played that song for them and that's when they started dancing."

Maria reveals she rarely busks in that spot but had chosen to try the location out knowing it would be busy thanks to the popular beer garden.

And she quickly got everyone's attention when she performed Elvis Presley's Can't Help Falling in Love as the couple danced on the street.

"It's my go-to song. They didn't request anything, they just asked me to sing them a song", she added.

Maria has had plenty of practice when it comes to performing for newlyweds and even had a similar spontaneous moment with a couple during summer.

She explained: "I play at weddings quite often but in summer I had something similar happen. There had been a wedding, this was when music wasn't allowed at weddings, and I was busking outside and they came by and danced in front of me.

"I sang the same song then, so this has actually happened before."

More than happy to be part of the special moment, Maria's performance nearly left the blushing bride in tears while onlookers gathered round to watch.

She said: "It's always lovely when the things like that happen because the bride came up and gave me a hug and said I nearly had her crying. It was very sweet.

"There was a wee bit of a crowd gathering and folk in the beer garden were watching."

The touching clip was captured by Buskers of Glasgow, who shared the footage to Tik Tok where it has racked up over two thousand likes.

Reacting to the video, one said: "Oh my God. This is absolutely beautiful."

"This is beautiful, it gave me goosebumps", wrote another.

One commented: "Love your voice, they will remember this moment forever."