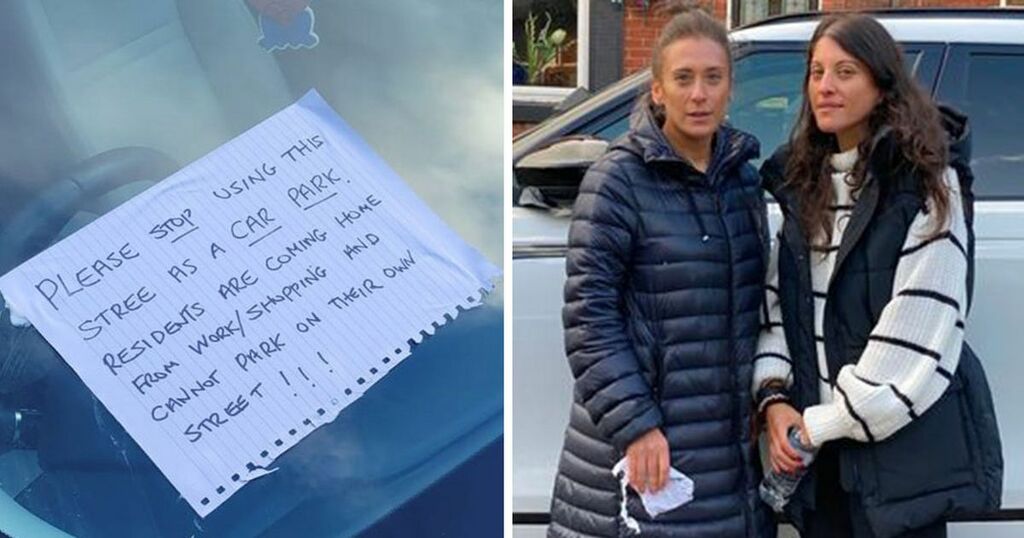 Opinions have been divided over the actions of one fed up resident who used silicone to stick a note to the wind screen of a Range Rover Velar blocking the space outside her home.

The MEN reported that two sisters with matching Range Rovers were left fuming when a series of notes were left on their cars, with one being stuck on with a silicone substance.

But the siblings, who both work at Loan Agency Bridgewater Acceptances, say they have had notes left on their windscreens on several occasions including being stuck on the glass with glue.

On Thursday, September 30, Ellie claims she discovered a note stuck with silicone to the windscreen of her black Range Rover after she finished work.

"Residents are coming home from work/shopping and can not park on their own street!!"

The writer of the note, who wishes to remain anonymous, defended her actions saying:

"I make no apologies, I have not been rude or malicious."

Ellie reported the incident on line to Greater Manchester Police.

The resident said: "It is not criminal damage, the substance I stuck it on with was easy to peel off. It was like a plasticine.

"It was a reasonable request, I was not rude.

"I just explained how things were from a residents view point."

Manchester Evening News Readers have reacted to the incident across social media with divided opinions.

Some agree with the resident, saying it shows a lack of consideration to park a vehicle daily on a residential road.

Others say so long as they are paying their road tax and aren't blocking a driveway they have a legal right to park wherever they choose.

"Why don't these sisters car share, at least that would free up one of the parking spaces??? They work at the same place!!!" one wrote.

Another wrote: "Well done just not being considerate as long as they’re ok it doesn’t matter to everybody else. There is a car park 5 mins away park there."

Some agreed with the actions of the resident and claimed she had done nothing wrong.

"Fair play….don’t think the resident did anything wrong, the sisters are just clearly used to getting their own way, " said one. Another asked, " What happened to consideration and courtesy?"

Some readers made it clear whose side they were taking on the matter.

One said: "Good for the resident, I'm on her side if you can't even park outside your own house or have visitors because of selfish people parking there (SIC) cars , it's ridiculous.

"People need to be a lot more considerate to people, nobody seems to have time for anybody else"

Others waded in stating: "Its a total lack of consideration for the residents"

"I personally wouldn't dream of parking my car in a private residential street everyday of the week."

But some readers agreed with the sister's view that they should be able to park without having their cars damaged.

They pointed out that if a car is insured, taxed and not obstructing a driveway it is within a motorists rights to park on the road outside somebody's house.

"I live near a school and two times a day it is chaos, but you just have to accept it, the parents at the school have just as much right as I do." One person commented.

Another pointed out: "So long as the cars are taxed and insured and not blocking a driveway you are entitled to park."

One said: " Imagine feeling entitled to silicone a piece of paper to someone's car because you don't like where they park.

Other comments included: "Most people when parking on a road are parking outside somebody’s property. If you pay your road tax you are not breaking the law.

Keep parking on the street, nothing they can do. Ignore the notes."

"She may own/rent a house, she doesn’t own the road! They can park legally where they want!"

One reader appeared to agree the sister's were not in the wrong, but wished it wasn't the case.

"Unfortunately she doesn't have a leg to stand on." They wrote. " If the two girls are paying road tax they can park on the street all they like."