Emma Raducanu stunned by her run to the US Open quarter-finals: ‘It’s absolutely incredible’ 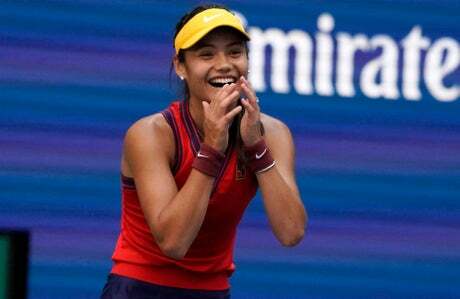 Emma Raducanu was surprised as anyone to find herself in the quarter-finals of a Grand Slam for the first time.

Unlike at the same stage at Wimbledon where she crumbled under the magnitude of the occasion, Raducanu seemed to revel in playing inside tennis’ biggest stadium, Arthur Ashe, as she reached the last eight of the US Open on Monday night with a 6-2, 6-1 win over Shelby Rogers.

She took in her surroundings both before and after the match from her seat, wide-eyed and in disbelief to have the last British woman to win the US Open, Virginia Wade, cheering her on from the stands 53 years on from that triumph.

The 18-year-old once more played with a confidence that belied her age against Rogers for a seventh straight win at Flushing Meadows – she had come through three rounds of qualifying simply to make the main draw.

She became the third teenager into the last eight of the two singles draws but another, Leylah Fernandez, said she had not been taken aback by her own run.

In contrast, Raducanu said: “I think everyone is on their own trajectory. Personally, I am surprised that I’m here. I didn’t expect it – I knew I was doing a lot of great work that would pay off some day but you never know when.

“I’m super appreciative of the moment. Yeah, having to be here in the US Open quarter-finals after not playing for 18 months is just absolutely incredible.”

And yet she has thoroughly belonged at the highest level. She has yet to drop a set in seven matches and conceded just 15 games in her four main-draw contests, the lowest by any player since Serena Williams in 2013. It left the greats of the game waxing lyrical about her potential.

Martina Navratilova, not one for hyperbole, called her “a superstar in the making”. She said: “You saw it with Novak Djokovic…Martina Hingis as well. They are born for it. If the body is willing, everything else is there.”

Despite falling 0-2 0-40 behind she was unfazed or “fearless” as Rogers had described her before the match. The American, in front of her home crowd, simply had no answer to the ferocity of shots coming her way as she conceded 12 of the next 13 games in a brutal display.

Navratilova called it “bullying” and it seemed that way at points such was the venom coming from the reworked Raducanu forehand, the ball somehow having a magnet for clipping the baseline however hard she hit it.

Raducanu has felt the weight of expectation before, notably in her only previous Grand Slam at Wimbledon when she suffered breathing difficulties in her fourth-round match, later admitting the occasion had got to her.

A repeat has looked unlikely in New York but she faces a step-up on Wednesday against Belinda Bencic, the world No12 and Olympic champion from Switzerland. It would be premature to talk about Raducanu being champion come Sunday but her statistics have been remarkable.

Looking ahead to the challenge of Bencic , the Briton said: “She has a lot of experience on the Tour. She’s in great form having won Olympic gold. I’m also feeling good about my game, also confident with the amount of matches I’ve played. I feel like I’m building with each one.

“It will be an extremely difficult match. I know if I’m going to have a chance, I’m going to have to play some really good tennis. But I feel like I’m building for each match. I’m really excited to see what I can do on Wednesday.”