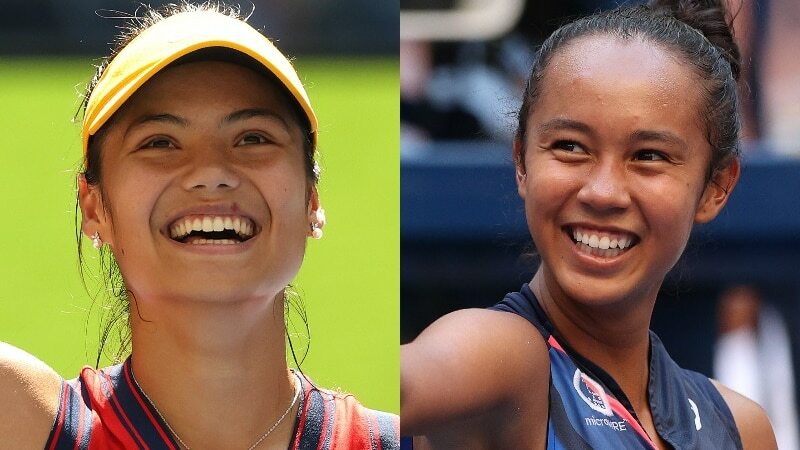 When you're a talented teenager at your first US Open and expectations are low, you become a dangerous opponent.

Emma Raducanu and Leylah Fernandez have taken out a succession of more experienced players on their way to the US Open final at Flushing Meadows.

"I think there's definitely an element of being young and free," Raducanu said.

"I think that's a big weapon and that's quite a nice feeling to have. Playing as the complete underdog, you just have a free swing."

The 18-year-old Englishwoman is the first qualifier in the Open era to reach the final of a US Open. She has won a total of nine matches, including three in qualifying, and has not dropped a set.

"I didn't expect to be here at all. I think my flights were booked at the end of qualifying," she said.

"It's absolutely crazy. It just shows when you focus one day at a time and take care of everything you can control, then crazy things can happen."

But the 19-year-old Canadian has always had a liking for the big stage.

"From a very young age, I've always wanted to be on the [centre] court," Fernandez said.

And did she always win those matches?

Fernandez's father and coach Jorge decided to stay at their Florida base and is coaching her via the phone. The initial review after her thrilling three-set win over Svitolina wasn't positive.

"He honestly told me that I put him through hell and back," Fernandez said.

Raducanu's parents are in England but their influence is being felt in a player who refuses to buckle in high-pressure situations.

"The calmness and mental strength definitely comes from my upbringing my parents have instilled in me from a very young age to definitely have a positive attitude on court," Raducanu said.

"When I was seven or eight, if I had any sign of bad attitude my mum would shout at me and tell me I'm not playing tennis again if I did that again. It's definitely instilled that good, positive mindset and it's helping on the biggest stages in the world."

This week Raducanu has met with Virginia Wade, the last British woman to win a grand slam (at Wimbledon in 1977).

Meanwhile Fernandez has been picking up tips from none other than the winner of 12 grand slam singles titles, Billie Jean King.

"She told me to go out on court, have fun and keep going for my shots. And I just did that today, so that obviously worked," Fernandez said after her quarter-final win over Svitolina.

Basketball legend Magic Johnson and Canadian Prime Minister Justin Trudeau have been among those singing the praises of Fernandez but the left-hander isn't getting caught up in the hype.

"I'm very lucky to have a great team around me who help keep my head a little bit levelled and just think about my next match and not about all the good things that are happening to me," she said.

Currently ranked 150, Raducanu will rocket into the top 50 after this tournament and become the new British female number one.

Respected coach and ESPN commentator Brad Gilbert has been impressed with the way Raducanu has dictated play against seasoned opponents, in only her second appearance at a grand slam.

After losing to Raducanu in the quarter-finals, Tokyo gold medallist Belinda Bencic urged the tennis world to temper their expectations when it came to the two teenagers.

"I just really hope that everyone will protect them and hope the best for them and not try to put so much pressure and so much hype around them," Bencic said.

"I really hope the best for them so they can just develop in peace a little bit."

The spotlight will only shine brighter now the two of them are set to face-off in the decider.

"I've known Leylah since we were juniors in under 12s. I played her in junior Wimbledon actually," Raducanu said.

"The fact that we're both here in the semi-finals of the US Open, it's very cool to see how far we've come."

Fernandez believes their time has arrived.

"We're just super hungry to make a difference in the tennis world," she said.

"This tournament just proves how well we're adapting to everything.

"It motivates us to do something more. We want to make something special out of this tournament."