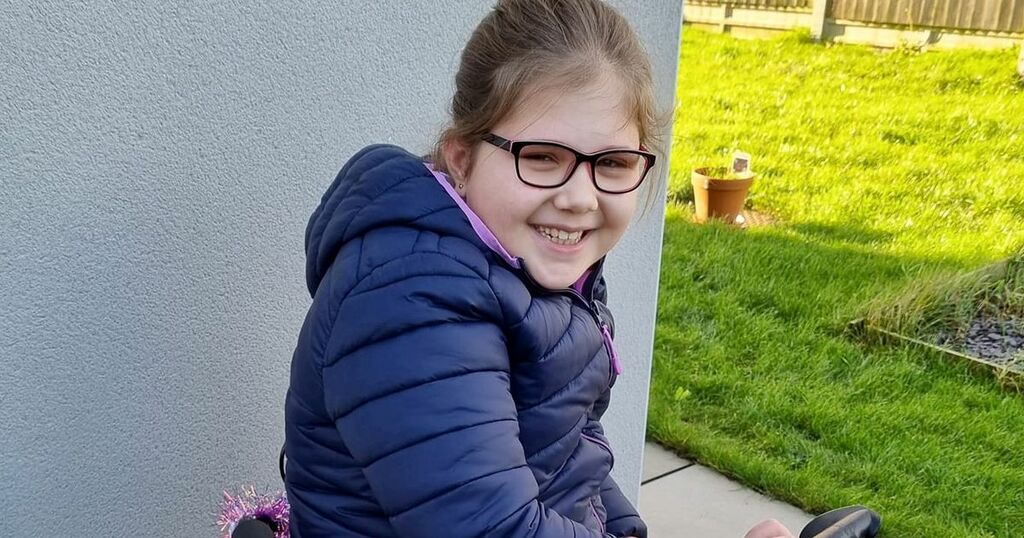 A nine-year-old girl who spent two weeks in hospital after being struck down with Covid is learning to walk again - with a charity challenge inspired by Captain Tom.

Brave Emily Saville lost her mobility and is continuing to suffer from the effects of Long Covid three months after she was first infected.

She was initially told by medical staff to "ride it out" but after her symptoms worsened she spent another 13 days in hospital for a series of tests.

After doctors ruled out anything other than Covid, Emily is now on the long road to recovery and still needs a wheelchair and walker to get around.

But as she struggles to get her life back, the schoolgirl has also wanted to give something back to the NHS who treated her - and is now following in the footsteps of Captain Sir Tom Moore.

She has already raised more than £2000 for NHS Charities Together by doing laps of her garden - and said she will continue until she is able to complete one unaided.

Her dad Chris Saville, 42, who lives near Yeovil, Somerset, said the whole experience had been terrifying for the family and they wanted to raise awareness of the impact of Long-Covid in children.

He said: "Emily first contracted Covid in mid-September, but up until that had been fine.

"She just woke up one day with a bit of a cough and cold and we thought we best get it checked. She had a positive result but was a bit poorly and had difficulty breathing, but nothing too severe.

"Three days later she suddenly was in excruciating pain and could not move without screaming in agony."

Emily was rushed to hospital but her family was originally told it was "just Covid" and to "ride it out."

But back at home she remained in constant pain so was later re-admitted to Yeovil District Hospital at the start of November where she stayed for 13 days.

Tests found no underlying issues so she was discharged but left so weak on her left hand side she couldn't walk unaided and needed help with basic tasks such as getting herself dressed.

Chris added: "When she left hospital they had managed to get control of her pain but she has been left using wheelchair and walker to get around slowly.

"It has been an extremely scary experience for everyone and has totally knocked her off her feet. She has not been able to enjoy life since.

"We just want to raise awareness of Long Covid in children. Up until we had this problem, we were led to believe children didn't suffer from Covid and if they caught it, it was very mild and they bounced back very quickly. But that's not been the case.

"She had MRI scans, blood tests and x-rays to try and rule anything else out.

"We were obviously happy they did not find anything else, but I think even the doctors were flummoxed to start with. Not many children have been this badly affected and not much research has been done into the Covid effect in children."

Chris said that before Emily was infected she had been a "normal, happy and healthy nine-year-old" who would swim several times a week and enjoy theatre and drama.

He added: "It was horrendous and Emily has found it really difficult. She has good friends who have helped her through but these have been dark days for us all. Emily has been pretty terrified throughout.

"When she was discharged we had to support her with every day tasks such as getting out of bed, washing herself etc. She was really struggling and as someone who was just trying to get her independence she found it really tough.

"Before this happened she was perfectly fit and healthy. She was just a normal nine-year-old girl.

"Progress since has been slow-going but she is starting to get some independence back."

Chris said the idea behind her charity challenge came when she was in hospital and decided she wanted to give something back to the staff who had helped her.

He added: "She initially set herself the challenge of doing 17 laps around the garden, which was to mark the 14 days she spent in hospital plus the three months she had been exposed.

"It has given her the motivation to get up and about and exercise.

"She set a very low target of £100 but it has gone so much wider than that and she is absolutely blown away by the support she has received.

"She now wants to carry on doing it until she can do a lap of the garden on her own unaided.

"That is still a massive challenge from where she is now and was unthinkable when she first started.

"She got the idea from Sir Captain Tom Moore who did something similar and has been inspired and given something to aim for."

Chris said when she started with lap one she had to stop a couple of times around the house but as she has progressed her resilience to do it has increased.

"She can now walk around the house with her walker and do a few unaided steps along the way. We are building that up but it is encouraging to see her progress. She's now done 25 laps and is continuing to improve.

"She is slowly getting there but is still not normal. She is still very weak down her left hand side but has started doing a couple of hours back at school a day.

"The question Emily always asks is 'When will I be better?' There really isn't an answer to it. Every day she seems to be getting stronger.

"She will have a good day where she can do stroll around with her walker. But the next day she will be in agony again and need to down and hide from the world. It is very cruel and we just don't know how it is going to go."

On the Just Giving page, Emily's walk against Covid, Emily said the support had been "overwhelming".

She added: "I have decided to push myself a bit further and now am aiming to complete a lap without my walker.

"This will be an even greater challenge for me to complete. Thank you so much for all your kind words."