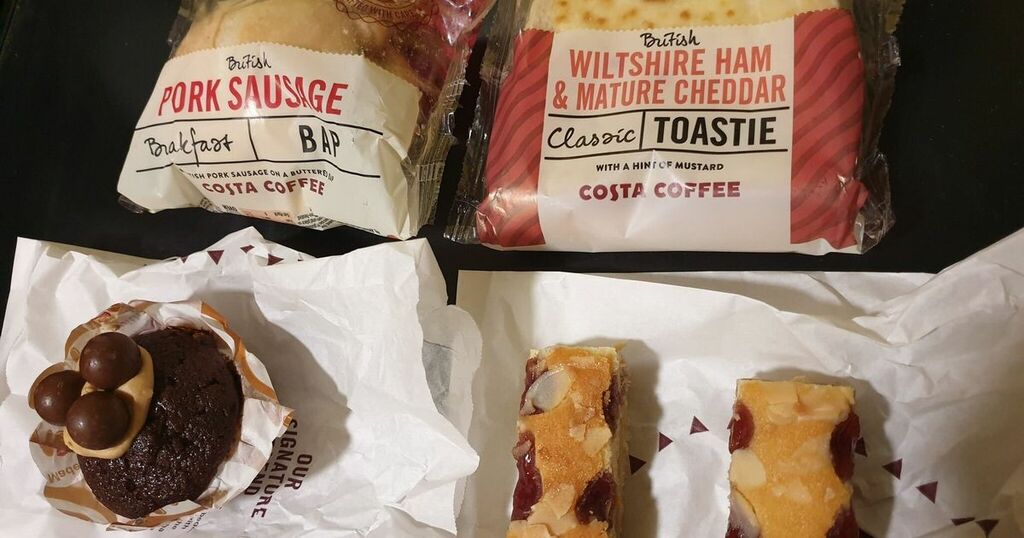 An Edinburgh woman was left feeling tricked after she ordered a Costa Coffee 'magic bag' from the Too Good To Go app.

Dee Dee, 40, took to social to vent her fury after forking out £3 for 'stale' reduced goods.

But Costa said its Too Good To Go app helps prevent unsold food from going to waste - with most of the food available just before its sell-by date.

"I am fuming so I went back in and said is this it, a stale sausage bap, a 50% off toasties, a muffin with 2 Maltese crumbling and the counter guy said but you got another 2 cakes and he has nothing."

In the photo attached, the food is pictured, which Dee Dee noted that the pigeons outside the centre "would turn their beaks up" at the product.

Speaking to Edinburgh Live, Dee Dee said: "It has annoyed me as I had travelled from the Ocean Terminal Costa location, when I noticed the Too Good To Go offer was for the Costa store at Newkirkgate shopping centre.

"I booked it as it would do my dinner, as you usually get around £25 worth from Costa but this was dire, drab and very stale so I had to bin them later on.

"The guy behind the counter gave me the bag, and said here's your magic bag, I left then had a look and was so shocked to see the contents within.

"If it's truly a magic bag, then half the food has disappeared!

"What I got was a 50 per cent off sticker on a stale cheese and ham toastie, which I'm sure the pigeons in the Kirkgate would turn their beaks up at.

"The breakfast bap was as solid as Tyson Fury's punch and the sausages were looking like a zombies fingers, total gross!

"I went back and complained, but the worker said the contents were worth the price point."

In the photo, two food products can be seen, one with a 50 per cent off sticker.

There is also a Malteser cake, and two small slices of cake which Dee Dee says she binned when she returned home.

"I responded by showing the stale food and he then said there's two cakes in there as well, but I responded this was mini slices and was a poor let down," she said.

"The store said they couldn't give me any replacement food as everything they had was fresh for tomorrow.

"I felt they were very rude, pure arrogance and I won't be back at that Costa.

"I'm still fuming at the way I was treated at that specific store, it is just not on.

"In compensation for the trouble, Costa gave me 2 free coffee stamps that is fine but this should never happen to anyone.

"There was no magic in my bag at all."

Costa Coffee confirmed that they had resolved this matter between the customer and their customer services team.

A Costa Coffee spokesperson noted: "Our partnership with Too Good to Go has enabled us to prevent unsold food from going to waste.

"All our customers need to do is download the free Too Good To Go app and make their purchase, before collecting at a designated pick-up time from their chosen nearby participating store here."