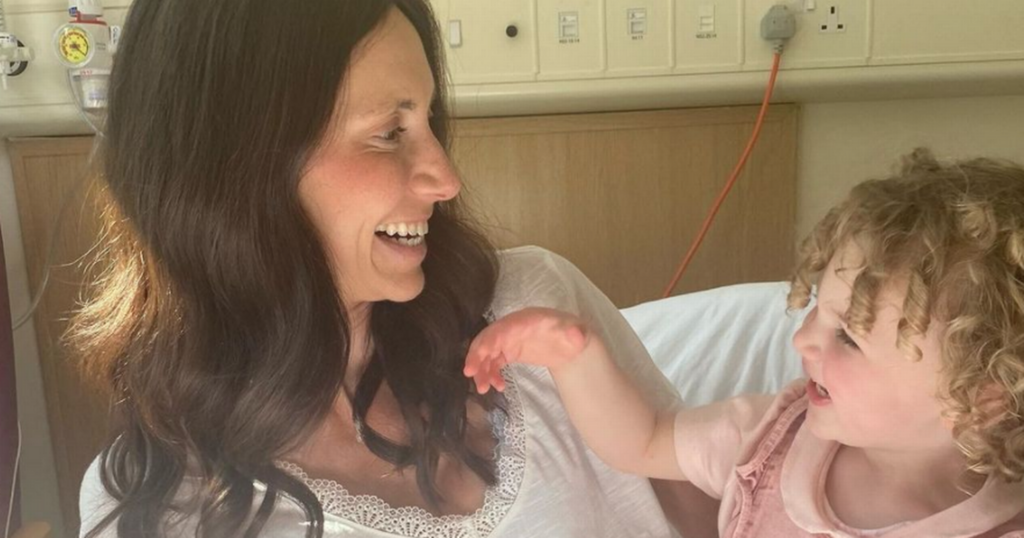 An Edinburgh mum has vowed to help others get over their fears of cancer after she was diagnosed with breast cancer earlier this year.

Victoria Robb, 34, was given the news in January 2021 after finding a lump in her breast a few months earlier which slowly became more painful as time progressed.

After always suffering from hormonal lumps in her breasts, Victoria explained that she had asked for a double mastectomy a few years ago to avoid the risk of cancer.

However, as there was no sign of any issues her request was denied, but a few years later a lump had grown that had turned out to be cancerous.

Speaking to Edinburgh Live, Victoria said: "In 2015 I had asked for a double mastectomy as I've always had lumpy breasts but I didn't fit the bill at the time which did make sense.

"In October 2020 I found a new lump but didn't think anything of it but then in November I noticed when I'd hit the ground to do burpees it would hurt in one breast, then by December I couldn't sleep on my front.

"By January I would just be sitting and would suddenly get shooting pains all the time, so I got a referral and two weeks later I was up at the Western General."

Due to the ongoing lockdown at the time, Victoria was forced to go to her appointment alone after her mum was turned away at the door.

However, after being scanned her mum was able to briefly return as they were ushered into a consultants room and given the news.

Praising the "amazing" work from the NHS, Victoria explained that within hours of finding out she had cancer doctors had been in touch to start treatment, and had had her eggs frozen just 12 days later.

What followed was a grueling round of chemotherapy for eight hours a day every three weeks, before two operations which involved a double mastectomy and lymph node clearance.

Despite pushing through a tough physical challenge, Victoria explained that her two-year-old daughter, Matilda, had been a fantastic source of motivation to get up and about despite the effects of chemotherapy.

She said: "It has been tiring but she is what keeps me going. It would be easy not to but everyday I've made sure to get up and out of the house.

"She's in nursery a few days a week which helps but I've never hid anything from her and she understands how I'm feeling, she knows I have cancer and I've explained it to her.

"She's always great and it has helped that I had a good level of fitness before the cancer, but even if I tell her I'm feeling tired or something she'll say 'oh sorry mummy I'll look after you' so she really does understand.

"She is a great motivation to fight this and keeps me going."

Recently recovering from her complete lymph node clearance in August, Victoria has continued to challenge herself and has launched a fundraiser to run a 10km next week.

Hoping to share her story and help others, she has also created an Instagram account since her diagnosis to help other women going through similar situations.

Now raising funds for Worldwide Cancer Research, an charity based in Edinburgh, she said:

"I've always liked to set myself little challenges and I've always kept fit, so a while ago after I recovered well from my double mastectomy I decided to sign up to the 10k which is just three weeks after my second operation.

"In fact, the second operation for my lymph nodes was so much worse and I woke up in excruciating pain for days but after a while it almost subsided overnight so I think I'll be able to do it.

"I want to do a half Ironman challenge next year so I thought why not start fundraising now, I think the research side of the charity is so important as if I was diagnosed with my kind of cancer 10 years ago I might not have survived or had long to live. All of that progress is down to research."

"I started my [Instagram] page for awareness and also to show the true side of treatment. I was okay when I had the lump and even when they told me I had cancer but the minute they said chemotherapy, that's what got to me.

"I always thought of someone having chemotherapy as lying on a bed grey and ill with no hair and no energy, but I wanted to show you can still get up and out and do it.

"The reaction has been amazing, it's given people hope and I've had messages from women all around the world going through the same reaching out which is just fantastic."

You can find Victoria's instagram at @vicsbreastcancerstory and her fundraiser here.