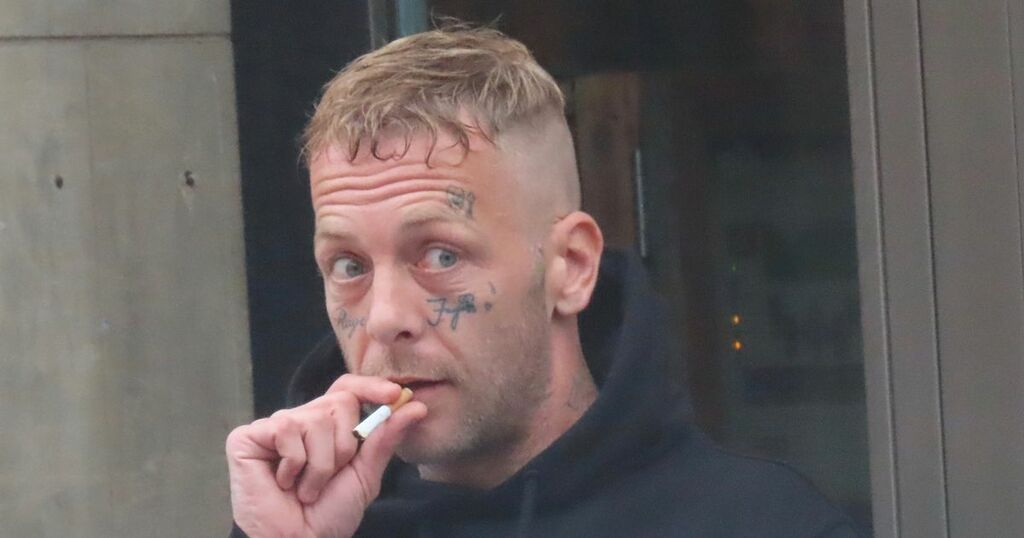 A drunk thug threatened to set himself and police officers on fire during a siege incident in Edinburgh last year.

David Matheson, 36, poured a liquid over his head and claimed it was petrol before threatening to set himself alight.

Matheson also issued threats to “pour petrol on the officers” and threw plates, glasses and bottles at the constables from a first floor balcony as they tried to talk him down.

Edinburgh Sheriff Court was told the lout was staying at his partner’s flat in the Pennywell area of the capital when she was suddenly rushed to hospital.

Matheson then received a number of Facebook video calls from friends of the woman who blamed him for her illness.

During the video calls Matheson made threats to “stab and slash” the woman’s pal Ian Stewart while brandishing a large kitchen knife at the screen.

The thug made further threats to kill Mr Stewart before he put the blade to his own face and proceeded to slice open his cheek.

Police were alerted to the incident and rushed to the home on August 9 last year where they found Matheson, of Easterhouse, Glasgow, on the balcony and refusing them entry.

Fiscal depute Rosie Cook said Matheson was seen “throwing missiles” including glass bottles and plates at police and threatening to “pour petrol on the officers”.

He also threatened to jump off the first floor balcony and he was seen to pour an unknown liquid which he claimed was petrol through his letterbox into the communal stair.

Matheson’s behaviour was said to have sparked a large scale incident which saw riot officers, a taser-trained officer, a police dog and its handler, the fire service and two ambulances race to the scene.

Ms Cook added: “During this time the accused continued to behave in a threatening and abusive manner.

“He threw dinner plates, glasses and bottles towards them [police officers] and they also witnessed the male pour a liquid over himself claiming it was petrol and threatening to set himself on fire.”

The siege lasted around three hours and was ended when police negotiators managed to talk Matheson into opening the front door and giving himself up.

Solicitor Sandra Walker, defending, said her client had woken up in bed with his partner earlier that day and “thought she was dead”.

Ms Walker said Matheson believed the woman’s “chances of survival were slim, but that was wrong” and that he had called for an ambulance.

The lawyer told the court the alarming siege incident began after he had been blamed for the woman’s illness by her friends but ultimately her condition had “nothing to do with him”.

Ms Walker added: “This made his anxiety worse and he was in a highly agitated state.

“Everything that has been said [by the fiscal] is correct but it was in fact water as I understand it, and any perceived danger was not there.”

Sheriff Kenneth Campbell deferred sentence for the preparation of reports to next month.

Matheson pleaded guilty to behaving in a threatening or abusive manner during a number of video calls and uttering threats of violence to Ian Stewart, brandishing a knife and cutting his own face at an address in Pennywell, Edinburgh on August 9 last year.

He also admitted to uttering threats towards police officers by threatening to set officers and their vehicles alight, throw items at them and threaten to jump from a balcony on August 10 last year.