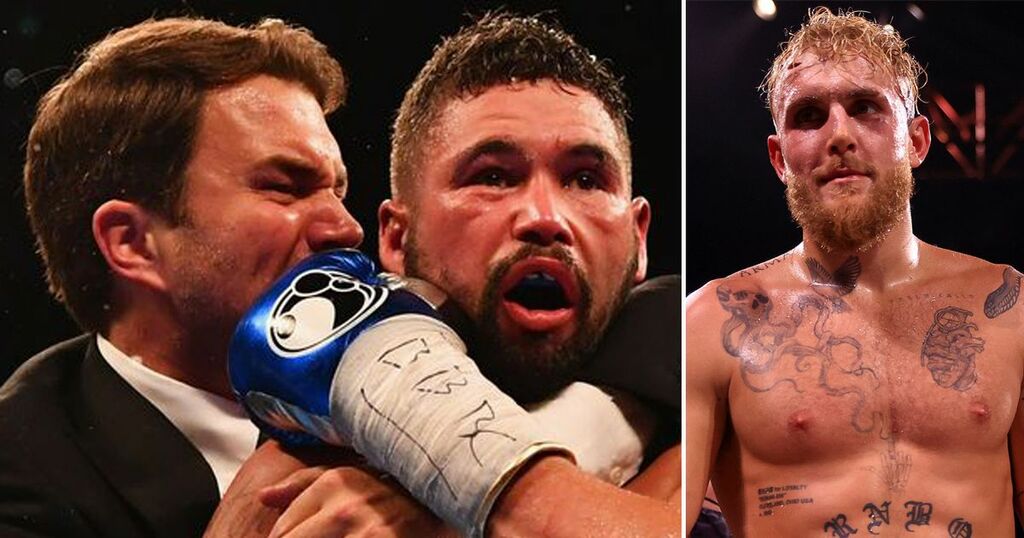 Matchroom Boxing promoter Eddie Hearn admits he would love to promote a fight between Jake Paul and Tony Bellew.

Former middleweight world titleholder Bellew hit out at Paul after the American claimed he was "carrying the sport of boxing".

The Liverpudlian then confusingly told Paul if he wanted to challenge himself against a "real boxer" he should face former UFC star Anderson Silva.

Silva has fought in boxing twice since transitioning to the sport after his MMA retirement in 2020, with UFC president Dana White also calling Paul to fight the Brazilian.

And Bellew's old promoter Hearn understands why his former fighter is insulted by Paul's recent words.

"I’d love to promote it. Anytime you can promote a fight where you can see Jake Paul get chinned would be exciting," he told DAZN.

“Jake Paul just rubs everyone up the wrong way, but I do like what he’s doing.

“People who’ve given so much to boxing, physically, emotionally and mentally, will find what he’s said insulting.

“I just laugh, but for someone like Tony, who’s dedicated his life to the sport, it doesn’t sit well with those guys.

“Hopefully, they can bump into each other, and we can see what happens.”

Bellew retired from boxing in 2018 after being brutally knocked out by current heavyweight champion Oleksandr Usyk.

Paul had a great campaign last year in the ring, earning over £30million whilst knocking out Ben Askren and picking up two wins over former UFC champion Tyron Woodley.

'The Problem Child' now plans to take a seven-month layoff from the ring to focus on promoting a potential undisputed fight between Amanda Serrano and Katie Taylor.

Is Jake Paul carrying boxing? Let us know your thoughts in the comments section below

Paul has faced criticism for not fighting an experienced boxer, but has been linked to meet former world titleholder Julio Cesar Chavez Jr upon his return to the sport.

And Bellew said whilst he holds no ill-will towards Paul, the YouTube star can't claim to carry the sport of boxing because he hasn't fought a legitimate boxer yet.

"First of all, I’ve got no hate or malice towards Jake Paul, crack on, do what you’re doing, it’s great," Bellew said.

"But in no way shape or form can you claim to carry my sport you absolute f***ing muppet, he hasn’t even fought a boxer yet.

"So how can you claim to be carrying the sport when you haven’t fought someone who comes from my sport, it’s unbelievable!

"I don’t like the fact it’s labelled a boxing match because he’s not facing a boxer."