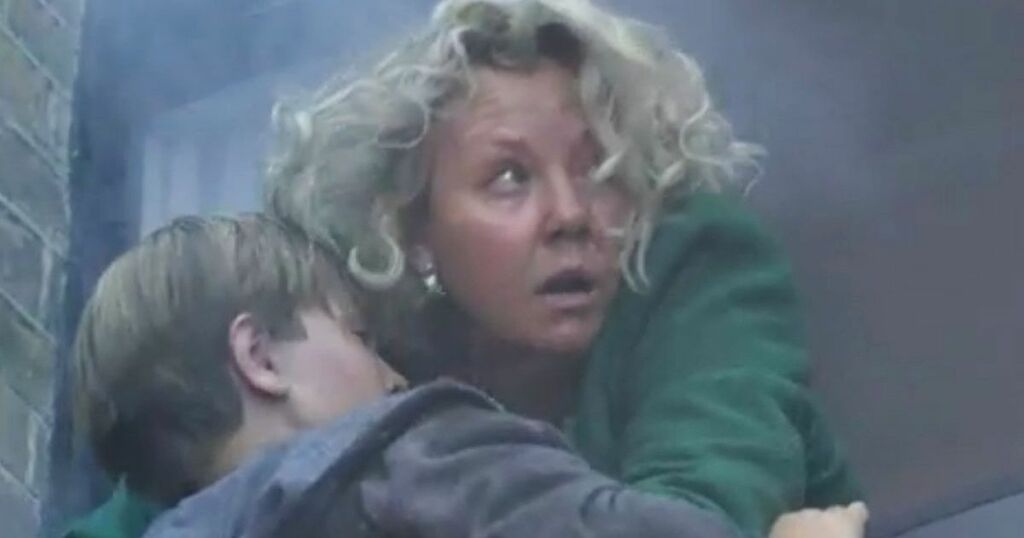 EastEnders fans were left blown away as Janine Butcher turned into a heroine to save children from a horrific fire.

An epic fire broke out at the Mitchell house after Shirley Carter had knocked out Phil Mitchell and Janine Butcher later threw daughter Scarlett’s jumper which hit the lit stove.

Tommy Moon and Scarlett Butcher were trapped upstairs with Janine and trapped by the growing flames.

Despite traditionally being known for her murderous ways, Janine saved Scarlett and Tommy’s lives by guiding the former out of the house and then going back inside to rescue her daughter’s newly-discovered half-brother Tommy.

As the flames grew, Janine lowered Tommy out of the bedroom window before can explosion blew the house apart and Janine fell backwards and Tommy hung on the windowsill before falling down.

Tommy was later taken to an ambulance to be treated, while Janine was rescued by Gray Atkins and the fire services.

Gary also rescued old rival Kheerat Panesar from the fire, to the surprise of Whitney Dean.

In the end, Kat Moon initially blamed Janine for what happened to Tommy but she confirmed she had saved him.

Naturally, EastEnders viewers were shaken by the scenes but none more so that Janine turning into a hero to save Tommy Moon.

One EastEnders viewer wrote on Twitter : “Look at our triumphant heroine Janine

"Like something from a Marvel movie. Fat Pat would be so proud #EastEnders ”.

A different fan of the soap commented: “Janine's gone to save Tommy #Eastenders ”.

Elsewhere, one Janine fan noted: “Love this maternal side to Janine #EastEnders ”.

Finally, one EastEnders fan concluded: “i’ve never screamed at the tv this much in a while i’m just SO glad that janine is okay #EastEnders ”

What did you think of the fire scenes in EastEnders? Let us know in the comments below.