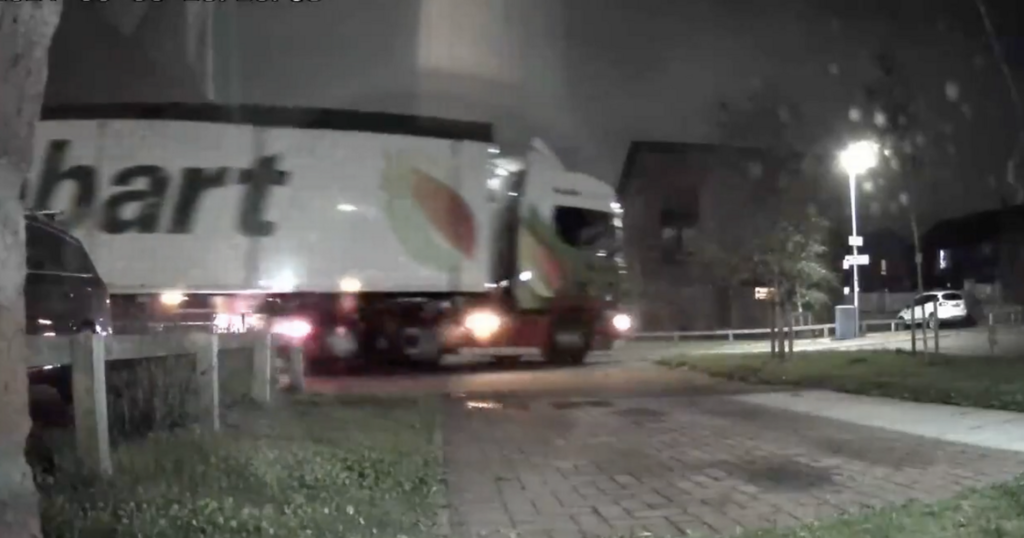 A dramatic video has surfaced online showing the terrifying moment an articulated lorry deliberately smashed into a house in East Kilbride last night.

The footage, which has been captured by a door cam from a nearby house, shows the Eddie Stobart lorry reverse into the house at high speed, before the driver moves forward and then reverses back into the front of the house again.

The shocking incident occurred around 11.20pm last night on Lancaster Crescent, not far from The Range leisure and garden store - and saw nearby residents evacuated from their homes by police as a precaution.

We reported this morning how the home, which was occupied at the time of the incident, has been damaged beyond recognition as a result of the impact from the lorry - with the windows smashed, brickwork buckled and the roof caving into a bedroom.

An eyewitness told Glasgow Live that incident was an 'absolute screamfest' and that she witnessed the kids who lived in the house jump out the window to escape the wreckage.

A spokesperson for Police Scotland said: "An investigation is under way after a lorry was deliberately driven into a house in Lancaster Crescent on Monday, September 6. Police were notified around 11.25pm. No-one was injured in the incident. The building has sustained extensive damage and local residents were evacuated as a precaution. Enquires are ongoing."