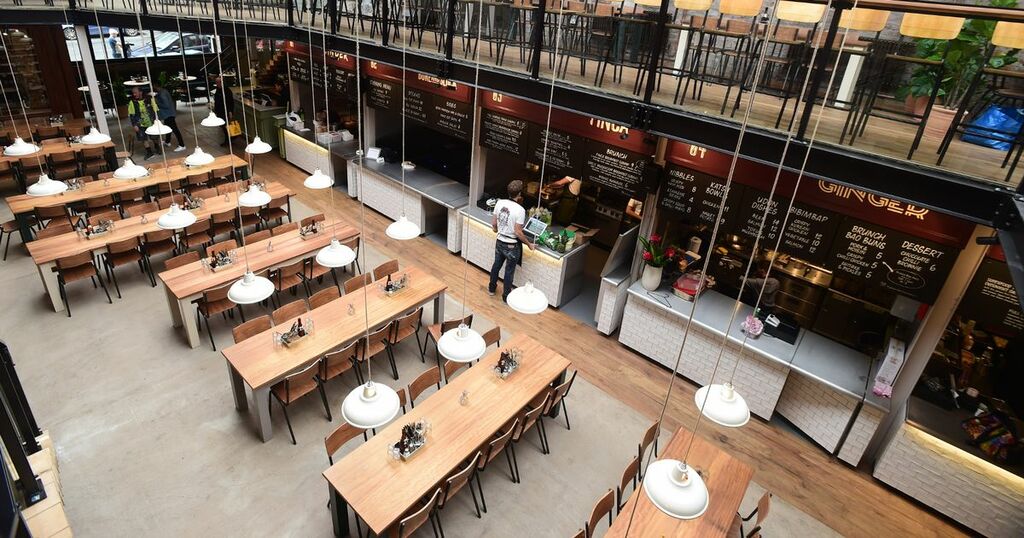 The team behind Duke Street Market are bouncing back after what felt like "going into a black hole" during the pandemic.

Just nine months after opening, the venue was forced to shut up shop.

The coronavirus pandemic had a major impact on the hospitality industry, and has in some instances led to the permanent closure of independent shops, businesses, restaurants and more.

The government's roadmap out of lockdown saw all restrictions lifted on July 19.

Lee, originally from Bradford, and the rest of the Duke Street Market team are looking forward to progressing with the business after more than a year of fear and uncertainty.

Speaking to the ECHO, Lee said: "Our opening was chaotic. We traded for about nine months and things were going really well, we'd had our first Christmas, we were getting to grips with the business, we were planning events like live music and trying to maximise the space, we were preparing for our first real summer where we understood the business a bit more then everything came to a standstill.

"It was really weird leading up to lockdown, business levels were still quite high then the week of it, everyone was talking about it and business dropped off like a landslide and it was difficult to understand if I'm honest - for all of us, really.

"We'd never lived through anything like that and we didn't know how it was going to work. It didn't make logistical sense to us so it was quite scary. We didn't know what was going to happen - it was like going into a black hole."

Like many people working in the hospitality industry, the staff at Duke Street Market were anxious about what lockdown meant for them.

Lee said: "A lot of the staff were worried and apprehensive about their jobs, I don't think anyone understood what furlough was, it was a complicated system. People weren't overly worried about the virus at that point, they were more worried about their livelihood and their jobs; their rent, and then trying to understand what covid was. I don't think any of us understood the seriousness of it [the virus] at first.

"We run entirely from business and customers, we had stock - the amount of money that was lost on food that just had to be given away or thrown away. We are a market but we have six independent restaurants and the money they lost for the size of their businesses, it was crazy."

Lee and the team tried to ensure market staff got as much support as possible.

He continued: "We were trying to find funding for people, hospitality funding, we got in touch with some of our new staff's old employers because they weren't eligible for furlough with us.

"I suppose in the first lockdown, it was kind of a novelty - you got to sit in your garden with an Aperol Spritz but after a few weeks, it was that uncertainty and trying to keep abreast of what's going on, that novelty wore off fast and then it was just a weird, scary time. Looking back now, I can't remember most of it, it was a whirlwind.

"We kept in touch with our staff, we were clear about everything, we offered areas of support for funding and grants in hospitality, we tried to support staff as much as possible but you've got yourself to worry about, too."

When restrictions eased, the market had to implement a new way of operating.

Lee said: "Getting to the end of the lockdown was difficult too, everyone was ready to get to work but we also had to change the mindset of how we work. When we came back, it was like organised chaos. In the past, everyone would be shoulder to shoulder in the market but when we opened, we had to work within the restrictions and we needed to make sure our staff felt happy and safe to work and that our customers felt happy and safe too.

"For us in hospitality, it's a very clean environment anyway - wiping down tables, cleaning banisters, washing your hands - it's quite natural in our industry to do all of that but then that was all stepped up a notch. Our capacity was halved to work with the restrictions."

Duke Street Market implemented an at-table order system, where customers could choose their food and drink via a QR code and order and pay without having to leave their table.

Lee said: "We've kept the QR code on the tables and it just makes the guest experience so much better but I could never have imagined something like that working prior to lockdown. If we do another market, we will introduce an at-table service system there too.

"People don't have to use the OR code system if they don't want to but over 90% of our orders come through the QR system and I love it, it's brilliant. If you're sat upstairs, you don't have to leave your table, you can order from your phone and it just comes straight to you."

Lee has been pleasantly surprised by customers' empathy and understanding during these difficult and trying times.

He said: "The biggest surprise was how easily people adapted to new ways of dining out and new ways of doing things. During lockdown, we closed and we didn't open for takeaway until the last minute and it didn't really work with the six businesses but then when we opened, it was really good to see how well people adapted and were happy to follow the procedures you'd put in place - even if they were above and beyond what the government advised which a lot of ours were.

"A lot of people were quite empathetic about how we had to operate - obviously you get a minority of people who don't want to follow what's in place but the vast majority did and that was really nice to see."

Of the future of the market, Lee remains positive. Duke Street Market will be offering a new deal for the autumn months to encourage midweek dining.

Starting from September 8 until October 27, those visiting the market will be able to bag 20% off food and drink all day every Wednesday. Food from five kitchens; Italian connoisseurs Cucina Di Vincenzo’s, Asian-inspired Ginger, seafood specialists Kelp, steakhouse kitchen Bone & Block and Cahita which offers Cuban dishes, is included in the 20% offer.

Lee continued: "We've got a lot of exciting things coming up, we've got the 20% off deal to hopefully get people coming out more and more midweek. We're looking forward to Christmas - that's the next big event, really. We're looking at putting in live music on Friday and Saturday nights in our bar area - that's coming in in October.

"We built our terrace into an indoor room for private hire so we can use that for evening sit down meals, pre-wedding meals, baby showers, business meetings. We've got our first wedding reception coming up this weekend.

"It's going to be an exciting little time for us and we're looking forward to seeing how that all works for us."

Lee said: "We've also got a new kitchen coming in at the end of September downstairs and a new restaurant opening upstairs in the next couple of months."

He added: "We've got a real community focus here, working closely with each of our amazing independent food traders to bring a great eating and drinking experience to the people of Liverpool."