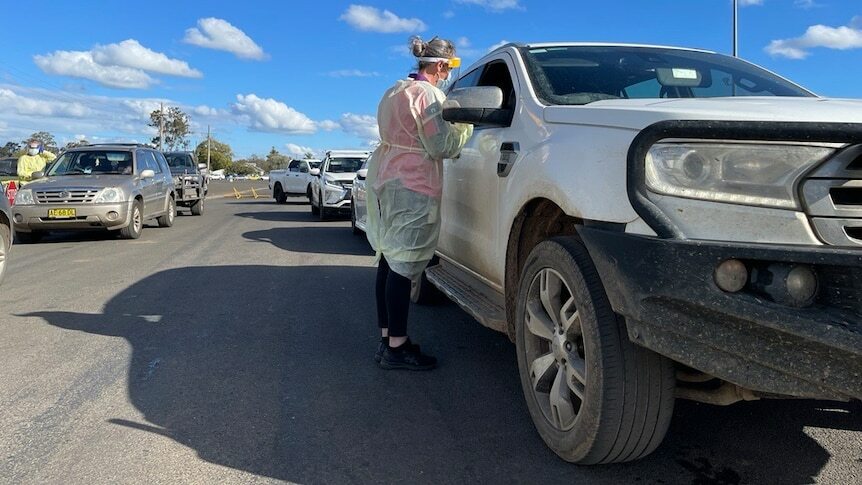 A fourth person has died in the central west of New South Wales from the current outbreak of COVID-19, with 13 cases associated with a nursing home cluster, four arising in the past 24 hours.

A man in his 90s from Dubbo died on Saturday at the St Mary's Villa Residential Aged Care facility where he acquired his infection.

He had been vaccinated but had other significant chronic underlying health issues.

Another aged care home in Dubbo, Holy Spirit, is linked to 15 cases.

Mr McLachlan said additional resources were being targeted at the two facilities, which are both operated by Catholic Healthcare.

"We've got specialist staff turning up today that have worked in aged care facilities with outbreaks previously, and we've got home care clinicians and general practitioners coming in to care for residents," he said.

Mr McLachlan said residents may also be moved to other facilities.

"There's a lot of things we've learned over the last 18 months of what to do at an aged care facility outbreak. It's definitely concerning," he said.

Twelve cases of COVID-19 have been detected in the Western NSW LHD in the latest reporting period — four in Dubbo, five in Bathurst, two in Bourke, and one in Walgett.

It is the lowest number of daily figures for the region since August 13.

Mr McLachlan is concerned the figure is due to the low testing rates.

There were approximately 2,200 tests in the past 24 hours, some of the lowest testing rates since the local outbreak began.

Mr McLachlan said he was particularly concerned for Walgett which has extremely low levels of testing.

"We know we've got cases in Walgett, 11 new cases, and multiple strains of transmission in that community," he said.

He said the low number of daily cases may reflect the testing rate.

"There is a I'm sure a connection there and a real risk of people circulating around our community that are infectious, not getting tested, and may not know that they have COVID-19," Mr McLachlan said.

Member for Dubbo Dugald Saunders said surveillance testing may be on the agenda.

The method, being tested in parts of Sydney, allows people to test for the virus without having to isolate while waiting for a result.

Mr Saunders said there were risks associated with that plan.

"It's something Health is certainly looking at in minute detail at the moment," he said.

He said the government is working to make surveillance testing available to larger industry groups so they can keep working.

"Hopefully in the next couple of days we'll have a bit more worked out about how exactly that could work."

The health district is also concerned about people not turning up for their appointments for their second vaccination.

A pop-up clinic delivering follow-up doses of Pfizer started in Dubbo on Saturday and will run until September 19.

People who received their first dose through the original pop-up clinic have been sent a text with a date and time for their follow-up vaccine.

Mr McLachlan said it may impact the region's push to reach a 70 per cent double vaccination rate.