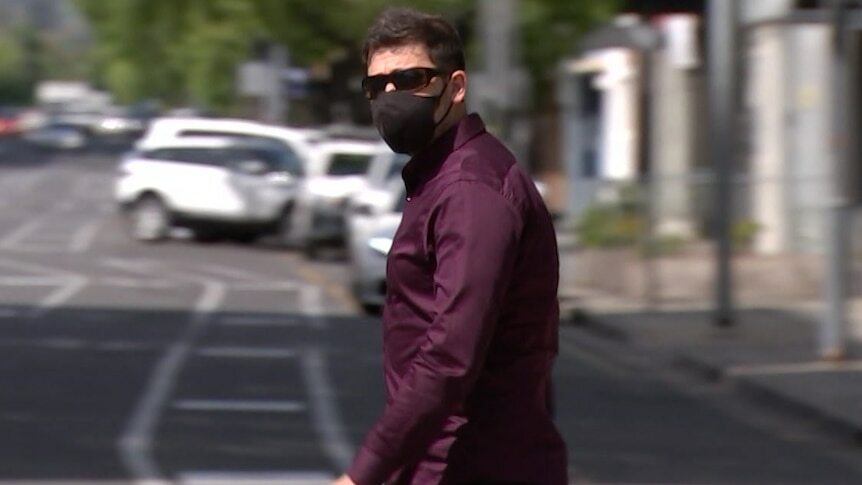 A drunk South Australian man who assaulted a flight attendant mid-air while attempting to get home before the state shut its border to Victoria was shocked to hear of his "deplorable" actions, a court has heard.

Timothy Kenneth Hawkes, 29, pleaded guilty to offensive and disorderly behaviour on an aircraft and assaulting a member of an aircraft crew while onboard a Melbourne-to-Adelaide flight in May.

The Adelaide Magistrates Court was told Hawkes — who worked as a callout technician on mining sites — was in Melbourne for training when he was advised that South Australia was about to shut its border to Victoria.

His lawyer said Hawkes — who suffers from panic attacks — needed to get on a flight quickly and made "a poor decision" to consume most of a bottle of Jack Daniels and a number of beers.

"His memory is being in the lobby drinking, getting on to the flight and then he can't remember anything other than being in the watch house being shaken by a police officer to wake up," the lawyer told the court.

"He is shocked to hear how serious and deplorable he acted.

The court was told the victim did not require medical treatment following the assault but had found the incident traumatic.

His lawyer said Hawkes was "not a man of violent disposition, had voluntarily sought treatment for his drinking problems and had good prospects of rehabilitation and staying out of trouble".

However, the prosecutor said the offence was very serious and should be subject to a prison sentence.

"It is very difficult for people who are affected to be able to move away from the behaviour," the prosecutor told the court.

"It's only lucky in these circumstances that the passengers who were immediately affected were able to be moved to other parts of the aircraft.

"If it had been a full aircraft, it would have been very difficult to know what could have occurred in those circumstances."

Hawkes will be sentenced on Monday.