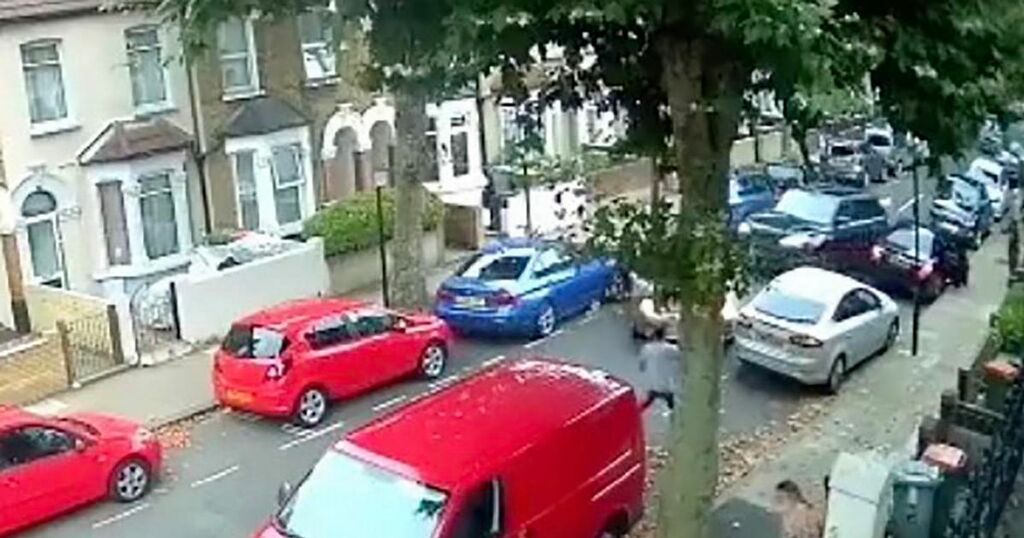 Shocking footage shows a Range Rover causing chaos on a suburban street in east London - and damaging at least 10 cars.

Footage widely shared on social media, shows the 4x4 smashing into a number of other vehicles as onlookers flee.

Witnesses have claimed online that as many as 13 cars were damaged, although officers have only confirmed 10.

Police were called to the dramatic incident on Benson Avenue in East Ham at around 6:50pm on Sunday.

And Scotland Yard revealed one of the struck vehicles contained a man and two children - who were lucky to escape unhurt.

The Range Rover - believed to have been stolen - was then driven off and ditched on a nearby road.

Did you witness the incident? Do you know what happened? Email webnews@mirror.co.uk.

No arrests have been made but a probe has been opened.

The Met said: "Police were called to Benson Avenue, E6, at 18.46hrs on Sunday, 12 September to reports of a Range Rover car being involved in a collision with a number of other parked vehicles.

"A group of at least 10 vehicles were found to be damaged and it was reported that one vehicle, containing a man and two children, had been pushed onto a footpath.

"The Range Rover had been reported stolen from Melford Road, E6, a short time before the collisions.

"The driver left the vehicle and got into a another vehicle before police arrived.

"There have been no arrests. Enquiries are ongoing."

A force spokesman added that there were no reported injuries and nobody went to hospital.