Fifteen people received the first of two injections on Thursday of the new Ebola vaccine in Goma, the capital of the North Kivu region of the eastern Democratic of Congo, said Doctors Without Borders (MSF), the medical charity who administered the vaccine.

"It's not a replacement for the first vaccine, it's being used to complement it, especially in areas where there are no cases of (Ebola) transmission," MSF coordinator Steve Akuha told Agence France Presse news agency.

The Johnson & Johnson vaccine, the second of its kind used in the DRC, will be given in two injections, 56 days apart. It is slated to be given to some 50,000 people over the next four months.

Ebola, the deadly hemorrhagic virus, has gripped the eastern part of the country since the epidemic was discovered in August 2018 -- the second worst worldwide.

The government health authorities report that some 2,193 people have died over the past 15 months.

The epicenter of the virus, the largely urban Beni-Butembo area, has had cases decrease over the past couple of months, but the virus has now spread to largely rural neighbouring Ituri.

This vaccine was initially rejected by the then-Congolese Health Minister Olly Ilunga who said introducing a second vaccine would be difficult where resistance to the Ebola health response was high. However, he resigned in July and is under investigation for allegedly embezzling millions of euros from the Ebola fund.

His departure paved the way for the second vaccine.

Resistance by local communities was high, as health care workers have been attacked 300 times over the past 15 months, and six have been killed. But the health response was initially hindered by poor communication, or even miscommunication by officials, many of whom did not understand the complexities of the languages in the area.

The original Merck vaccine was already been used in the region, where some quarter of a million people have been immunized against the virus, many of them Ebola health workers.

MSF came out in September to denounce the World Health Organisation (WHO) for opaquely managing the first vaccination supplies.

“The pace of vaccination activities is too slow and only a fraction of the eligible population is benefitting from this critical tool,” said MSF, and called for an independent committee to manage the vaccination programs.

WFP speaks on the challenges of dealing with Ebola in DRCongo: PT 1 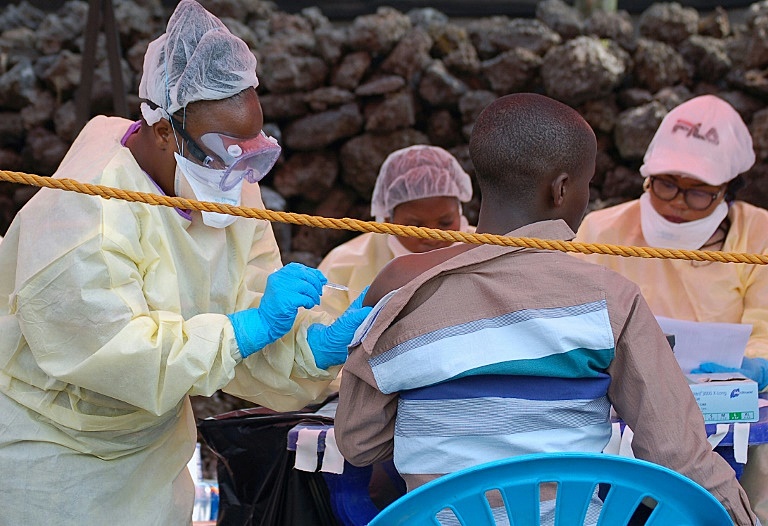 Wellington (AFP) - Samoa finalised plans for a compulsory measles vaccination programme Monday, after declaring a state of emergency as…