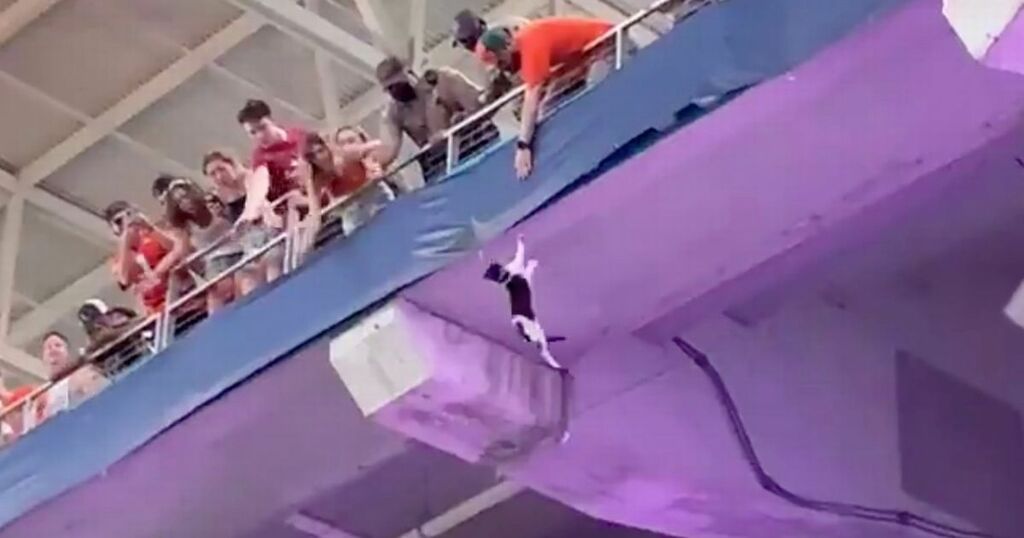 A cat fell from the upper tier of a football stadium but astonishingly survived after being caught by fans.

Fans came to the animal's rescue as it plummeted from the tier above by using an American flag to catch it as it fell.

The heart-stopping fall was captured on video after the stray cat scaled the upper deck of Miami’s Hard Rock Stadium.

The drama happened during a game between the University of Miami and Appalachian State.

Video footage shows the black and white moggy clinging to the stadium's purple dressing as it dangles and twists above the shocked spectators below.

It was only gripping the purple cloth of the stadium dressing by a single claw and tried desperately to clamber back to safety.

But a few seconds later the poor animal loses its grip and missed the arms of would-be rescuers above before plunging into the crowd beneath it.

Hundreds of people were on tenterhooks as they watched the animal hanging on to save its life.

And in the stadium's hospitality boxes they feared the worst as the cat passed them on its heart-stopping fall.

A group of quick-thinking fans usedd the Stars & Stripes to break the cat’s fall.

They unfurled their flag in the nick of time to break the cat's fall as it hurtled towards the seating below.

“It hung there for a little while with its two front paws, then one paw, then I was like, 'Oh my goodness, it’s coming soon',” said Craig Cromer, who brings an American flag to each University of Miami home game.

“This is my first catch,” Cromer joked to the Miami Herald.

After free-falling from the upper tier, the cat bounced off the Cromers’ flag before being grabbed by a group of students who prevented it from causing further mayhem.

One clip on Twitter shows the fans holding the cat aloft like Simba from the Lion King to the cheers of the crowd below.

Yianni Laros (@Yiannithemvp) | Twitter posted a video of the dramatic fall on his feed which has attracted millions of views and responses.

His video drew scores of responses including one from @Caitie8 who said: "I hope the cat is really ok :("

He later reassured followers who had watched the video of the cat fall saying: "It is no worries! Stadium confirmed during the game."

Fans clearly loved the heart warming end to the dramatic fall and cheered and hooped after it was caught by the outstretched flag.