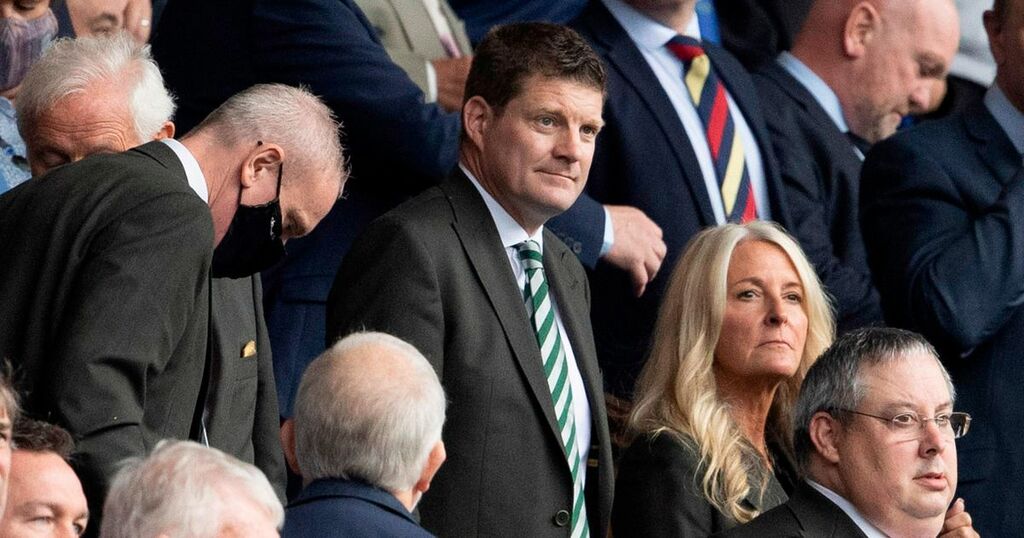 Dom did not have a long spell as Chief Executive of Celtic.

But he leaves the club in a better position than when he joined it.

First thing’s first and that is to wish him and his family well after it was announced that he was stepping down for personal reasons.

Celtic have acted quickly with Michael Nicholson moving into the role in an acting capacity and fans will want to know about the impact.

Ange Postecoglou arrived on McKay’s watch and that has to be deemed, on what we have seen so far, a highly positive move.

It was well known McKay was moving into the job before he arrived from the SRU and there is no doubt there was a lot of work to be done and it needed to be done swiftly.

Peter Lawwell had a good run in the position, but his term had run its course by the end of last season

The mood around the support base was gloomy. The team was miles behind Rangers in the final league table and the cup competitions were disappointing.

With so many loan players disappearing and big names seeking pastures new, the word overhaul was an understatement.

The fact things have turned so quickly point to the fact that McKay, in a short space of time, did a good job.

The chase for Eddie Howe didn’t end well when the Englishman decided he didn’t want the job, but Postecoglou has gone in and caught the imagination of the fans which means McKay more than made up for that.

Fair enough, the Aussie still has things to prove, but the early signs are very positive.

There is a style which is being imprinted onto the team that has excited the supporters. For that reason, it’s so far, so good with that appointment.

Working with the manager, McKay managed to facilitate the signing of 12 players during the last transfer window and just about every base was covered.

Certainly the key areas which desperately needed strengthening were strengthened. It’s not just the volume of signings, but the talent of them which have pleased the fans.

Kyogo Furuhashi is the obvious example. News of his injury setback which is going to rule him out for some weeks is a bitter blow. Even more so given the fact that it was sustained on international duty with Japan after such a bright start to life at Celtic.

But he’s a cracker and Liel Abada looks the goods. Joe Hart and James McCarthy are big-name arrivals and there is potential in the likes of Liam Scales.

If you wish to be picky, there may have been a need for another body in the central area, but, by and large, the right work was done.

In terms of sales, McKay was under pressure to get it right.

Let’s face it, there were few better at driving a good deal for Celtic than Lawwell and those were tough shoes to fill in that department.

But the monies which were obtained by the player departures were impressive. Bagging over £30 million for Kristoffer Ajer and Odsonne Edouard with the pair of them into the final year of their contracts was superb business.

Ryan Christie had even less time to go on his deal and a more than acceptable figure was secured from Bournemouth for his services.

All in all, when you consider the fact that all three were going to go and that Celtic have managed to replace them and make a nice chunk of money at the same time reads well for McKay’s tenure.

You can argue that maybe some of the agreements were in place or well down the line by the time the new CEO got in the door, but that is debatable. We don’t know that.

The simple facts are that these deals were done on McKay’s watch and most Celtic fans are happy with the way the window turned out.

It’s obvious that the Sporting Director or Director of Football role if you want to call it that is one which needs to be filled at some point soon.

McKay was not able to get that done, but, to be fair, Postecolgou did say himself that the main priority during the transfer window was to sort out the playing staff because time was not on his side and he put that ahead of anything else.

The manager will want someone in place and it’ll be seen whether Nicholdon is central to that or whether that will wait until a permanent appointment is made.

Could Lawwell even go back? Unlikely, but you never know with anything in the game of football.

Postecoglou also has to get backroom staff members arranged and, again, he will be looking at that with the window closed and the squad now settled until January.

Generally, that’s the barometer for anyone in a position of power at a football club.

So, in that sense, McKay’s time, if short, should probably be seen as successful.