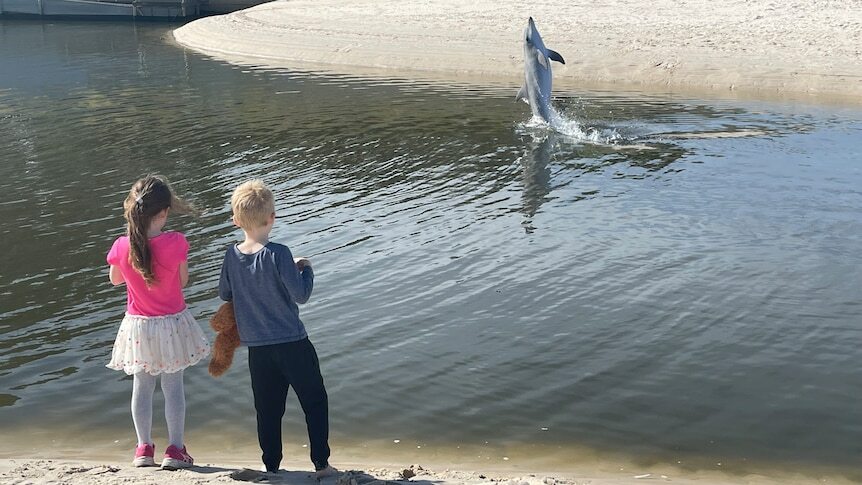 A wild dolphin stuck in a river outlet is "showing off" for beachgoers west of Adelaide this morning, but experts have warned people not to approach it.

Wildlife experts believe the dolphin got washed into the River Torrens outlet at West Beach during high tide early this morning, before becoming stuck when the tide went out.

Since then, it has been seen frolicking in the water, doing backflips and tail walking in front of a crowd.

Local resident Jason said he had been watching the dolphin since the early hours of the morning.

"He's come through obviously there's some fish here, so he's been hanging around having a good feed like they do," he said.

He said it was common to see dolphins in the area, and that this one had been "showing off for the crowd" by doing flips.

Marine biology student Mackenzie Richardson said she was driving along the road when she saw the crowd building down on the beach.

"I raced down, and saw the dolphin breach a couple times, it's got a bit of seaweed on its dorsal fin, it's really special," she said.

"You can really see like all the intricate details of its fins, it's really cool.

"It's interesting that it's there's only one in here because they're animals that like to be in like groups, so maybe he's got some friends out in the water waiting for him."

Australian Marine Wildlife Research & Rescue Organisation's Aaron Machado said it was important for people not to intervene or try to help the dolphin.

"It's not the first time it's happened and it won't be the last.

"It's brackish water, so I know a lot of people have called saying they're concerned with the water quality.

"It's not perfect, there is a small flow of water coming out of the Torrens but it's brackish water so it's a mixture of sea and fresh and the animal can sustain itself in that for 48 hours, not a problem."

He said it was likely the dolphin should be able to swim back out this evening.

He also urged people to adhere to the 50-metre "no approach zone" around the dolphin.

"That's the law, as much as people want to help, they have to make sure that they take care of themselves," he said.

"If the animal is exhaling and you breathe that in, it's got zoonotic disease you can potentially contract that. So there's rules are put in place not only for your safety, but the dolphins."

Mr Machado said the tail walking the dolphin had been doing in front of crowds this morning was a learned behaviour that it likely picked up from a fellow dolphin in its pod.

"This dolphin could very well have interacted with those dolphins from the Port River," he said.

"There's quite a few dolphins in the Port River who have done that themselves.

"That's where she learnt that behaviour we believe and she's passed that onto to others."