Do not change status of places of worship: Chidambaram

No attempt should be made to change the status of any place of worship as it would lead to huge conflict, former Finance Minister P. Chidambaram said on Saturday with reference to the inspection of the Kashi Vishwanath temple-Gyanvapi mosque complex in Varanasi.

“We believe that all other places of worship should remain in the status they are and they were. We should not make an attempt to change the status of any place of worship, that will only lead to huge conflict,” stated Mr. Chidambaram.

Mr. Chidambaram, who heads a panel that is debating various economic issues in the Congress Chintan Shivir, said only Ram Janmabhoomi was exempt from the purview of the Act and the law was made by the Narasimha Rao government with much thought.

“...It is to avoid such conflict that the Narasimha Rao government passed the Places of Worship Act,” he noted.

Mr. Chidambaram’s remarks came on the day when the first round of inspection started following the Supreme Court’s refusal to stay the inspection of the Kashi Vishwanath temple-Gyanvapi mosque complex in Varanasi.

“It is the law of the land and it has been upheld by the Supreme Court in the Ayodhya judgement and there is no reason for any departure from it,” Mr Khurshid said.

“We had brought this legislation [Places of Worship Act] for closure and we would not want the closure that we had hoped for and prayed for to be disturbed,” he added. 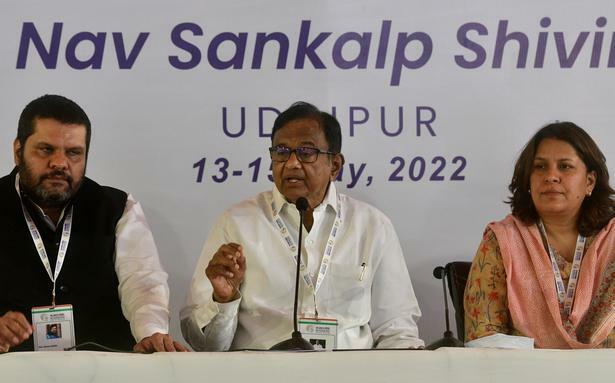 Status of places of worship should not be changed, will lead to conflict: Congress leader P. Chidambaram
P. Chidambaram said the Places of Worship Act was passed after deep consideration and the only exception in that Act…