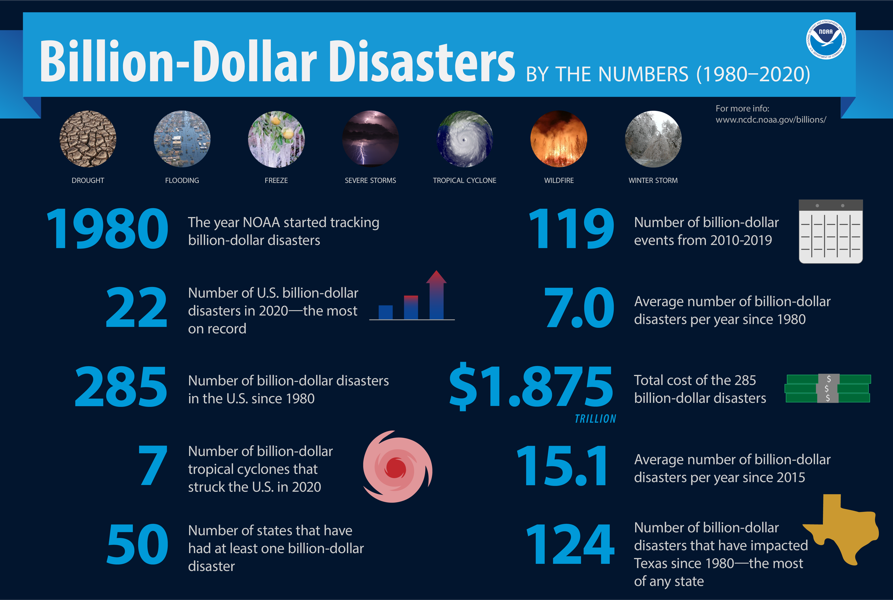 Hurricane Ida and California wildfires have wiped entire communities off the map. Tens of thousands of people in Louisiana are still without power, two weeks later, and more hurricanes are on the way.

Every time there’s a disaster like this, the entire area economy comes to a halt. Homes are lost or damaged, the power goes down for days or weeks, the streets are blocked, people can’t get to work or work from home, and stores and businesses are closed.

The U.S. has had 8 “weather/climate disaster events with losses exceeding $1 billion each” in 2021 (as of July 9, 2021) that “resulted in the deaths of 331 people and had significant economic effects on the areas impacted,” according to the National Oceanic and Atmospheric Administration, or NOAA. The U.S. has had an average of 16.2 of them each year from 2016-2020

Because of this disruption to the economy, businesses are watching carefully as President Joe Biden’s massive infrastructure bills move through Congress. But do business leaders actually support these bills – especially since the bills call for many of them to pay higher taxes?

The answer apparently is “yes,” but they are working behind the scenes to help craft it, according to Anne Kelly, Vice President of Government Relations at Ceres, the influential nonprofit dedicated to driving market-based policies that serve the planet. She’s also head of the Ceres Policy Network, Business for innovative Climate and Energy Policy (BICEP) says business is bullish on the plans.

It boils down to the fact that business depends upon a functioning infrastructure – from roads and bridges to railways to electricity and reliable Internet service that requires broadband – and those are all being devastated by these extreme weather events. With workforces working remotely more now, employees are scattered across the country in rural areas as well as urban and suburban ones, therefore, access is critical to keep operations flowing and employees able to work.

That’s why 408 companies and investors signed an open letter to President Biden calling on him to set ambitious climate goals and standards: “As business leaders, we care deeply about the future of the U.S. and the health of its people and economy. Collectively, our businesses employ over 7 million American workers across all 50 states, representing over $4 trillion in annual revenue, and for those of us who are investors, we represent more than $1 trillion in assets under management. We join the majority of Americans in thanking you for re-entering the U.S into the Paris Agreement and for making climate action a vital pillar of your presidency.”

They called for more bold action “to address the climate crisis at the pace and scale it demands,” adding a specific request. “We, therefore, call on you to adopt the ambitious and attainable target of cutting GHG emissions by at least 50% below 2005 levels by 2030.…New investment in clean energy, energy efficiency, and clean transportation can build a strong, more equitable, and more inclusive American economy.”

It boils down to risk

The business and investment community is focused on reducing risks, any risks to their success, and climate risk is one they believe the government must address. They also think it will help spur much-needed economic growth as the country emerges from the pandemic.

“On climate risk disclosure,… (j)ust in the last few months, we were thrilled to see the Federal Reserve come out identify climate risk as a systemic financial risk,” Kelly said on my podcast recently, Electric Ladies. She also pointed out that the SEC is seeking public comments “about what should the SEC do when it comes to mandatory climate risk disclosure.” Respondents have 90 days to submit their ideas and feedback from their experience with the various voluntary Environment-Social-Governance (ESG) reporting systems currently in use. “So, you are going to see a cascade of comments from the business community about: What do we actually need?... How do we get decision-useful, comparable information to investors so they can make the decisions they need to make?,” Kelly explained.

Prominent businesses like Apple have come out publicly for climate risk disclosure and for the Clean Electricity Standard in these infrastructure bills, and “that’s really significant, that represents a sea-change,” Kelly added.

Lisa Jackson, Apple's vice president of Environment, Policy and Social Initiatives and former EPA administrator, declared Apple’s support at the ARPA-E Innovation Summit earlier this year: “We support the passage of a Clean Energy Standard which we think will drive large amounts of renewable generation, and do so in a way that shows people where they need to go and what they need to get there.” (ARPA-E is the Advanced Research Program Agency, Energy, the innovation arm of the Department of Energy.)

“The general theme is that the road to economic recovery is through climate action,” is how Kelly summarized the infrastructure plans and why the business and investment community supports them. “And so, it is an infrastructure and a jobs plan, but there’s no question it very intentionally addresses the climate crisis in a number of ways.”

She called out the “array of renewable energy tax credits that are wildly popular and successful and will certainly get the support of the business community,” as well as “electrifying our transportation system,” both of which she says are “job-generating elements.”

Kelly also emphasized the equity focus of these infrastructure bills. “President Biden made it very clear that 40% of the benefits would go to underserved, disadvantaged, front-line communities,” she said. Many studies, including one in 2020 from Princeton provide evidence that, “Communities of color are disproportionately victimized by environmental hazards and are far more likely to live in areas with heavy pollution.”