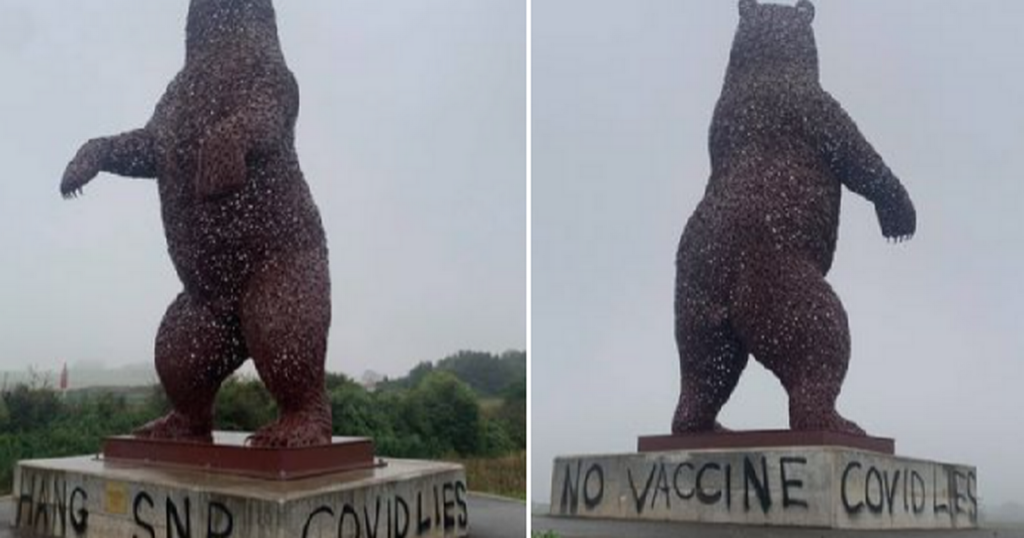 Disturbing acts of graffiti directed at the SNP and claiming “ Covid lies” have been daubed on the base of a bear-shaped sculpture in a Scots town.

One vile message, reading “hang SNP,” was scrawled beneath the DunBear statue in Dunbar which was erected in tribute to conservationist John Muir, who was born in the East Lothian town.

Another piece of graffiti on the concrete base of the statue claims “covid lies,” while further fence posts at a nearby housing development were vandalised with similar messages including “no vax.”

Police believe the vandalism took place between Thursday and Friday last week and are appealing for witnesses to come forward.

Pictures shared by police on social media show other graffiti tags such as ‘Dist,’ Dist 21’ and Distrikt 21’ painted on the side of a local bridge and on road signs which they say have been there since April.

Officers say these acts may be unconnected but would encourage anyone with information about these to contact them.

Anyone with information should call police on 101 quoting incident reference 1939 of 11th September 2021.

The 16ft-high steel DunBear statue was unveiled in Dunbar in 2019 and was sculpted by Scottish artist Andy Scott, the man behind the Kelpies.

The artwork is in tribute to Mr Muir, who was born in Dunbar in 1838. The bear, located off the A1 near the Spott roundabout, is symbolic of Mr Muir’s travels through America’s wild places.