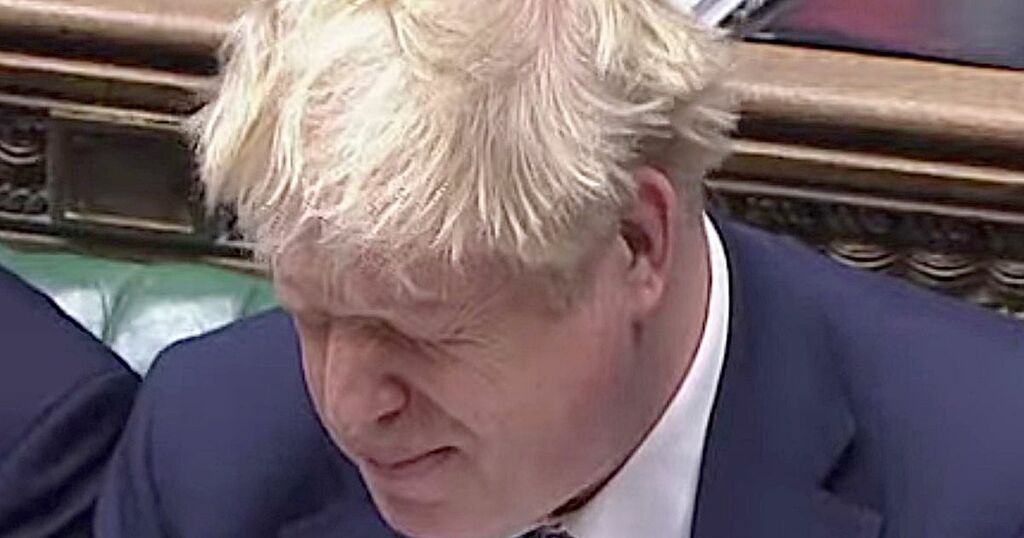 Boris Johnson was fighting for his political life last night as Tory MPs turned on him over Partygate.

They joined Labour in calling on him to quit after he finally admitted in a half-hearted apology that he was at a boozy No10 bash during lockdown.

Mr Johnson came under fire from all corners after his half-hearted apology over the No10 lockdown party was met with widespread derision.

Tory MPs joined Labour and grieving ­relatives in demanding the PM quit, leaving him battling for his political career.

Mr Johnson finally admitted he had been at the “bring your own booze” bash in the garden of Downing St, on May 20, 2020, when such gatherings were banned under Covid rules.

But the shameless leader claimed he initially thought the event was a work gathering and he again tried to hide behind the probe by Whitehall enforcer Sue Gray, insisting MPs should wait for the outcome of that before any decision on his future is made.

Labour leader Keir Starmer tore into Mr Johnson’s excuses. He said: “After months of deceit and deception, the pathetic spectacle of a man who has run out of road.

“His defence… that he didn’t realise he was at a party is so ridiculous that it’s actually offensive to the British public.

“The party’s over, Prime Minister. The only question is will the British public kick him out, will his party kick him out, or will he do the decent thing and resign?”

As Mr Johnson tried to quell the growing mutiny within his own ranks, several MPs privately admitted they were submitting letters to the chairman of the Tory backbench 1922 committee to kick off a leadership vote.

Red wall MP Christian Wakeford said: “How do you defend the indefensible? You can’t. It’s embarrassing and what’s worse is it further erodes trust in politics when it’s already low.”

Vice-chair of the 1922 committee William Wragg urged Mr Johnson to quit now rather than wait for Ms Gray’s report, due out next week – amid fears it will be another ­whitewash. He said his colleagues were “worn out of defending what is invariably indefensible”.

Veteran Tory MP Sir Roger Gale called the PM “dead man walking” as he said it was already clear he had misled parliament.

Campaign group Covid-19 Bereaved ­Families for Justice member Hannah Brady, whose dad Shaun, 55, died just days before the No10 garden party, said MPs have a “moral duty” to remove Mr Johnson if he will not quit.

SNP Westminster leader, Ian Blackford and LibDem boss Ed Davey also called for the PM to resign. The scandal broke after an email from aide Martin Reynolds inviting more than 100 No10 staff to the party was leaked.

Mr Johnson admitted he had spent 25 minutes at the bash, which he said was to thank staff for their work in the pandemic.

But he said: “I believed implicitly this was a work event. With ­hindsight I should have sent everyone back inside.

“I should have found some other way to thank them. I should have recognised that even if it could be said technically to fall within the guidance, there are millions of people who simply would not see it that way.

“People who have suffered terribly, people who were forbidden for meeting loved ones at all inside or outside, and to them and to this House I offer my heartfelt apologies.”

The PM’s loyalists came out to try to defend him today. Health Secretary Sajid Javid said he “did the right thing by apologising”.

Rishi Sunak initially failed to defend the PM. But the Chancellor, who had been in Devon, also later said Mr Johnson “did the right thing”.

Asked why he did not back his boss at first, Mr Sunak replied: “I’ve been on a visit all day today.”

One source told the Mirror a senior aide had warned the PM in person against attending, telling him it was in breach of the rules.

Crowds tonight gathered outside Tory HQ in London to protest over the garden party.