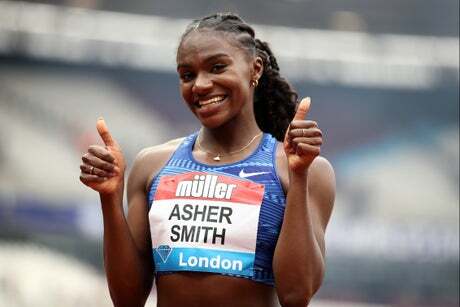 The Independent UK
One subscription that gives you access to news from hundreds of sites
Dina Asher-Smith is harder, better, faster, stronger

Dina Asher-Smith is more than the fastest British woman ever. She tells Shannon Mahanty about speaking out on George Floyd, flirting with…

Dina Asher-Smith has expressed her excitement about competing in Birmingham but stressed that she sees London as the home of athletics in the UK.

The 200 metres world champion is set to compete in the Birmingham Diamond League event on May 21 and the Commonwealth Games that take place in the city from July 28.

There is uncertainty over the future of athletics at the London Stadium, with it recently reported that talks had taken place over the sport possibly moving away from the venue, which also hosts West Ham matches.

Asher-Smith was asked at a press conference ahead of Friday’s Diamond League meet in Doha – where she claimed her world title in 2019 – if she felt Birmingham was potentially going to become the track and field centre of the UK.

“(But) I always think that London is the centre of sport in the UK and it would be amazing to kind of have a base and really use the London Stadium, particularly as it is the Olympic Stadium, it’s where the Anniversary Games has been, and all the other major sports have their base in London.”

Asher-Smith said: “For British athletes it’s the busiest season we’ve ever had. We’ve got a World Championships, then we’ve got to fly home for a home Commonwealth Games and again a week later we have the European Championships in Munich.

“Because I hold four titles across those ones I’m definitely going to be very busy.

“With it being a home Commonwealth Games, we always want to go and represent England incredibly well. For me, I’m focusing first and foremost on the World Championships and performing well there, and then, we will very much take everything in our stride, but I do aim to be performing at my best at all three.”

The 26-year-old claimed her second relay Olympic bronze medal at last summer’s Tokyo Games, having failed to reach the 100m final and pulled out of the 200m following a hamstring problem.

Asked how she was feeling now, Asher-Smith said: “I’m fine. It was a bit annoying because a few weeks later I was kind of almost back in PB shape.

“It was just very annoying timing, but it doesn’t really change anything about the kind of form I was in, or the amount of improvements I have made as an athlete since I was running last time in Doha in 2019.

“I’m just really excited to start running tomorrow, and get to the business end of the season, when you’re in peak shape. It will be fun to showcase the work that we’ve been doing over the past three years.”

The Independent UK
One subscription that gives you access to news from hundreds of sites
Dina Asher-Smith is harder, better, faster, stronger

Dina Asher-Smith is more than the fastest British woman ever. She tells Shannon Mahanty about speaking out on George Floyd, flirting with…