A landlord was left devastated after his tenants moved out and left a huge amount of mess and destruction behind them.

Lee Locking revealed that the home was lived in for the last five years but after receiving his keys back, he went to check the condition of the property.

Much to his disgust, he arrived to find that every room was piled high with rubbish and dirt.

READ MORE: 'I towed my neighbours car after they blocked my driveway - they need to learn'

Amongst the vast amounts of debris were bags of cans and bottles, old clothes, mountains of rotting food and even cat faeces in the bath.

Lee said the tenant had not asked for the deposit back as a result of the mess, but the landlord was shocked to see the extent of the damage.

He says he feels let down by the letting agents who managed the property, and claims they should not have allowed the flat to end up in this state.

Now, the 56-year-old faces the massive task of making the property in Swansea liveable again.

He says this will include a new bathroom, new kitchen and new carpets, as well as disposing of what he says is the three to four tonnes of rubbish.

Lee said every time he steps foot in the house in Waunarlwydd, it leaves him feeling dirty.

"Every single room is a state. I can't even go in without wanting to shower immediately after," he said.

"When I first went to the property, I'd taken the dog with me. I opened the door and the smell just hit me. I took one look at the mess up the stairs and closed the door and put the dog back in the car, because there was no way I was letting the dog come in.

"I have no idea where the person slept. A neighbour said they saw the tenant take a mattress from the house and assumed it was being taken to the tip. After seeing the state of the property, I'm not so sure."

Every room in the property is filled to the brim with some sort of filth. The kitchen is strewn with jars and boxes of rotting food, a litter tray which is piled high, and empty cartons of milk.

In one of the other rooms, you can't even see the floor as it's covered in bin bags, takeaway containers, Amazon boxes and clothes.

The bathroom is one of the worst rooms in the house, with the bathtub covered in old cat faeces. The toilet seat is just about hanging on to the bowl, while the toilet is filthy, and surrounded by old plastic bags, used tissue and empty food packets.

When the tenant handed over the keys, Lee claims he was told that he could keep the £400 deposit to "take care of the mess". But Lee reckons the cost of making the place liveable again will be much higher.

He said: "It'll easily cost me a few thousand, I'll need to replace all the carpets, the kitchen, the bathroom. I've been told there is at least three to four tonnes of rubbish to clear. I'm at breaking point with it."

As Lee has no previous experience with renting, he decided to entrust the property to be managed by letting agents, John Francis. Lee says he feels let down by the company, and claims that they should not have allowed the flat to get as bad as it has.

"I understand that people may struggle with their mental health, and keeping on top of cleaning might be tough for them, and I really feel for them, but John Francis allowed it to get to this state."

Lee continued: "I feel really annoyed and angry that I've let them manage my property for the past five years and this is the state it's been returned to me in. They were supposed to vet the tenants and be the main point of contact for any problems.

The flat was meant to be no pets allowed but there has clearly been a cat in the property. They've taken 12% plus VAT for five years and now they've left me in limbo."

A John Francis spokesperson said: "John Francis Lettings takes any customer complaint extremely seriously. We are in receipt of an official complaint from the landlord and which we are currently investigating. We will liaise directly with the landlord to resolve the issues. " 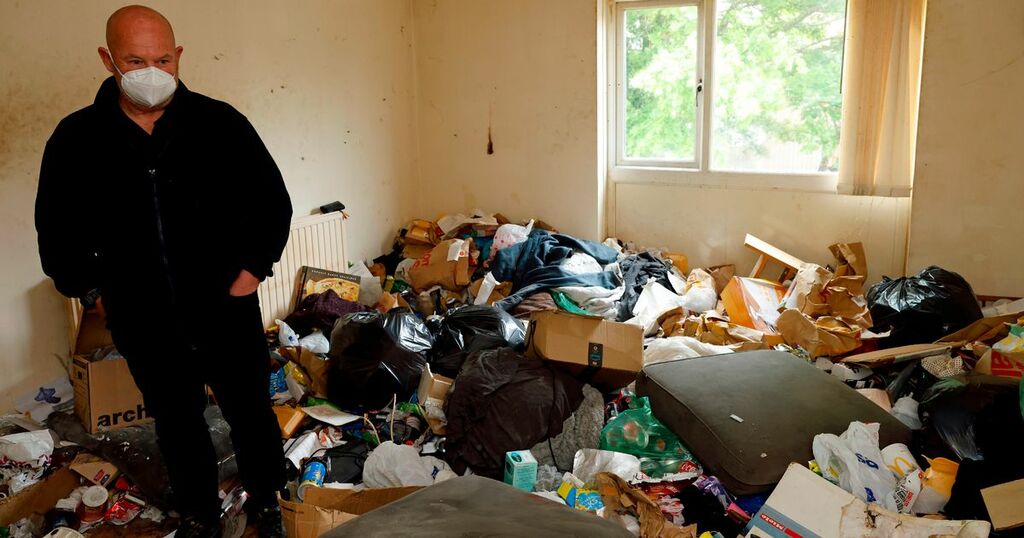 Devastated landlord finds mountains of rubbish, unbearable stench, and piles of poo in flat rental from hell
Warning: This report contains graphic pictures taken by a photographer who described it as the worst place he'd been in…

WARNING: This article contains graphic pictures. Landlord Lee Locking received the keys back to his property after renting it out…