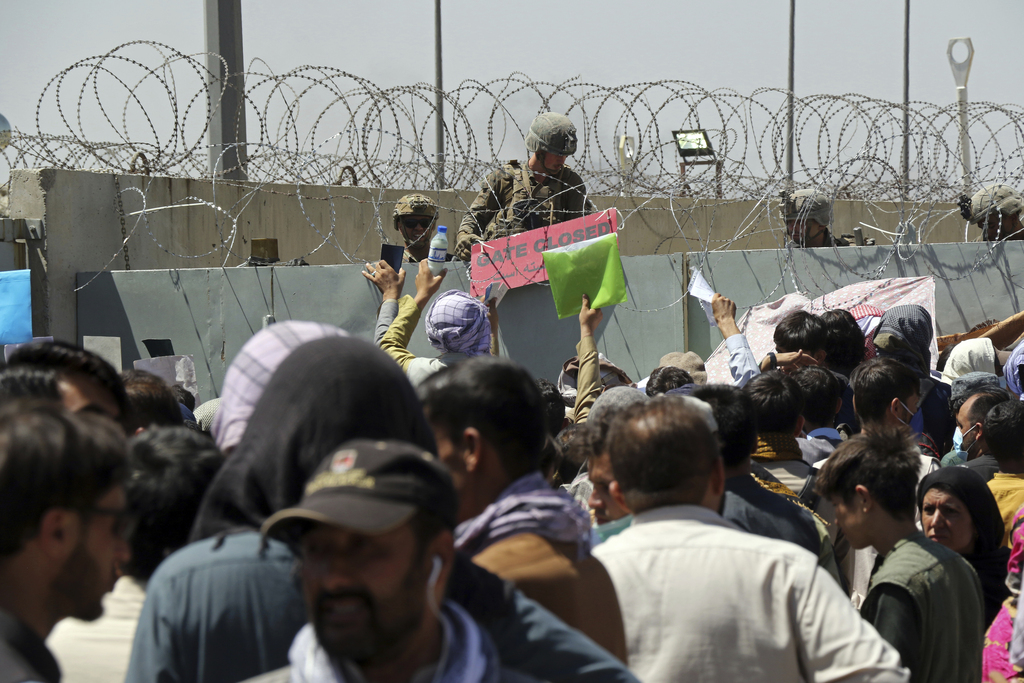 Washington, DC – As Democrats in the United States scramble to defend the Biden administration against growing criticism for the country’s chaotic withdrawal from Afghanistan, a new tactic is emerging: highlighting former President Donald Trump’s role.

At a congressional hearing on Monday, US Secretary of State Antony Blinken stressed that President Joe Biden inherited a Trump agreement with the Taliban that stipulated that all US troops would leave Afghanistan by May of this year.

The US withdrawal at the end of August, shortly after the Taliban took control of the country, turned into a crisis for Biden, who faced widespread condemnation from Republicans and media commentators, as well as calls for his resignation.

Now the president’s supporters in Congress are mounting a defence focused on the previous administration’s policies towards the Taliban.

While Republicans lambasted Blinken and the current administration in Monday’s hearing, Democratic legislators focused their questions and remarks on Trump’s talks with the Taliban.

“We inherited a deadline [for withdrawal]; we did not inherit a plan,” Blinken told the House Foreign Affairs Committee (HFAC). Congressman Brad Sherman, a California Democrat, responded: “So no plan at all; it’s amazing that it wasn’t much, much worse.”

In February 2020, the Trump administration signed a deal with the Taliban that would ensure the withdrawal of all foreign forces from Afghanistan and guarantee that “Afghan soil will not be used against the security of the United States and its allies”.

The agreement also led to the release of 5,000 Taliban detainees as part of a prisoner exchange with the US-backed Afghan government, which did not take part in the talks that led to the agreement.

Biden, who took office in January, later pushed the withdrawal deadline to the end of August.

After the Taliban entered Kabul last month, US forces – still in control of the airport in the capital – commenced an evacuation operation to airlift American citizens, third-country nationals and Afghan allies out of the country.

The evacuations were marred by scenes of chaos and a suicide bombing that killed 175 people, including 13 US service members.

“When President Biden took office in January, he inherited an agreement that his predecessor had reached with the Taliban to remove all remaining US troops by May 1 of this year,” Blinken told the HFAC on Monday.

“As part of that agreement, the previous Administration pressed the Afghan government to release 5,000 Taliban prisoners – including some top war commanders. Meanwhile, it reduced our own force presence to 2,500 troops.”

Blinken added that Biden had no choice but to finalise the withdrawal or escalate the war and risk attacks against US forces.

But Republicans have been furious with the US president, accusing him of abandoning Washington’s allies and allowing Afghanistan to become a “haven for terrorists”.

“The administration’s bungled pull out from Afghanistan just may be the worst foreign affairs disaster in American history,” Republican Steve Chabot told Blinken on Monday. “You’ve essentially surrendered that country and its people to the good graces of the Taliban, and the Taliban doesn’t have good graces.”

Joe Wilson, another Republican, called on Blinken to step down, while his colleague Brian Mast accused the administration of manipulating the intelligence about the prospect of a Taliban takeover after the US withdrawal.

“We don’t need to hear lies,” said Mast, a Florida representative, as Gregory Meeks, the Democratic chair of the HFAC, reminded Mast that his time had expired.

In his own remarks, Meeks noted the Republicans’ criticism of the withdrawal, but also highlighted the 2020 deal negotiated by Trump and his then-Secretary of State Mike Pompeo.