‘Democracy on the line’: Biden under pressure to act on voting rights now

By Jewel Wicker in Atlanta 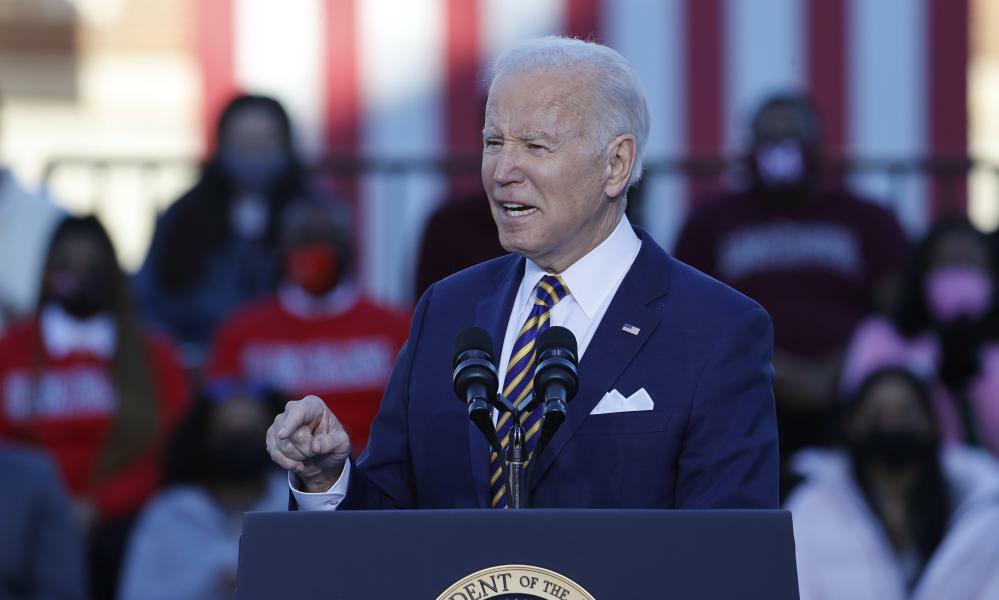 As Joe Biden and Kamala Harris readied to speak at the Atlanta University Center Consortium in Georgia on Tuesday, nearly a dozen protesters gathered outside the building, holding up signs that read “end the filibuster” and bore messages of support for federal voting rights protections.

The president and vice-president were in Atlanta to bring urgent attention to the party’s efforts to pass new voting rights laws, but some activists who attended the event (and several who opted not to attend) have criticized Biden, claiming he was using the moment as a “photo op” instead of putting forth a solid plan of action.

In a video posted to social media during the event, Sandra Williams, the executive director of the ATL North GA Labor Council, emphasized that the group supported the president but wanted strong action to ensure voting rights legislation is passed on the federal level. “It’s time for president Biden to do what he knows to do to pass the voting rights act,” she said.

The John Lewis Voting Rights Advancement Act and the Freedom to Vote Act, two major Democratic bills, have been blocked by Senate Republicans using the filibuster, which requires 60 votes to advance a bill.

The filibuster rule has become a major point of contention. Outside of the event, activist Porsha Miller chanted, “End filibuster, voting rights now” through a bullhorn.

Both Biden and Harris pushed for changes to the Senate filibuster rules in order to pass the voting legislation, which is currently stalled in Congress.

“I support changing the Senate rules, whichever way they need to be changed, to prevent a minority of senators from blocking actions on voting rights,” Biden said on Tuesday.

“Let the majority prevail,” he also said, referring to the 60 votes currently required. “And if that bare minimum is blocked, we have no option but to change the Senate rules, including getting rid of the filibuster for this.”

The move garnered support from the coalition of activists who had previously opted out of attending the event, worrying the president wouldn’t take a strong enough stance or reveal a solid plan of action to ensure the legislation is passed.

Many of the event’s attendees also seemed more supportive of the president, cheering for him when he evoked the two Georgia Senate runoffs that helped decide control of the US Senate, and applauding the vice-president when she criticized Georgia’s controversial SB202, an election law passed by the Georgia legislature last year. Specifically, she criticized a portion of the law that makes it illegal to pass out food and water to people who are waiting in line to vote.

Cameron Randle, graduate SGA president at Clark Atlanta University, said he wanted the same justice that the activists were demanding, but he was ultimately pleased with Biden and Harris’ speeches. “John Lewis worked so hard for voting rights and (former) President Trump and his supporters, and the Republican senators are really trying to undermine our democracy. That’s why I’m here standing with President Joe Biden and Vice-President Kamala Harris to say ‘I stand with y’all.’ In the state of Georgia, democracy is on the line.”

In addition to attending the event, he wrote a letter to the president thanking him for Higher Education Emergency Relief Fund, which saw the department of education invest billions of dollars in historically under-resourced colleges and universities, and also asking him to get rid of student loan debt for HBCU graduates.

Sawyer Kovacs, a student at Columbus State University, said he traveled from north Georgia to hear Biden and Harris speak. He applauded the administration for hosting the event on a college campus. “College is one of the most important and crucial places to get people educated on things like voting,” he said. The student added that he believes Biden’s speech was a “stride towards progress in ensuring everyone has equal rights and availability to vote and achieve their goals”.