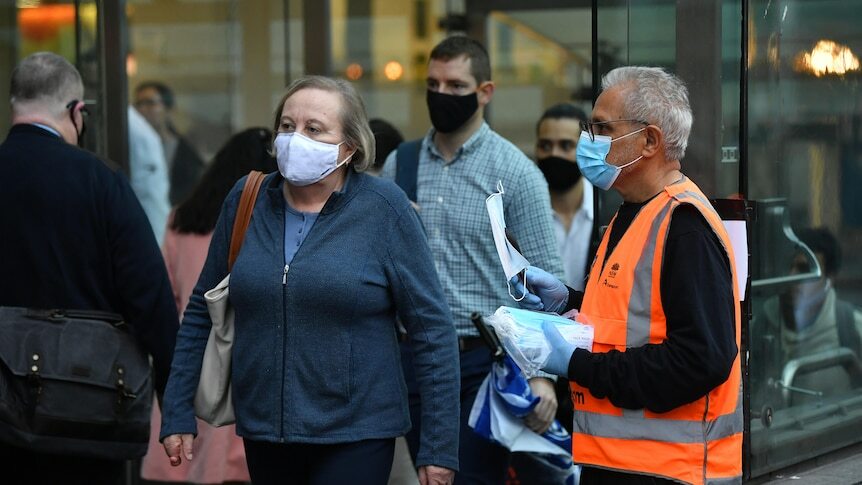 Tens of thousands of people have been infected with the Delta strain of COVID-19 in NSW, but the outbreak has not been as deadly as those last year, data shows.

The high vaccination rates in older people are resulting in fewer deaths in aged care in particular this year, an infectious diseases expert has said.

While 153 people have died from the virus since NSW's Delta outbreak began on June 16 — and many more are expected — that number is far lower than last year.

One study calculated that the death rate in Victoria in 2020 was a higher 4 per cent.

That fatality rate is falling as more people become infected, but less die from the virus.

However, just four in every 1,000 COVID patients had died up to August 29.

After a woman in her 30s with no pre-existing health conditions died from COVID-19 last month, NSW Australian Medical Association president Danielle McMullen said: "Any death from COVID-19 is tragic, and particularly one of someone taken so young, I think is a really strong reminder to all of us that COVID-19 is a serious illness."

Peter Collignon, an infectious diseases doctor at Canberra Hospital, said there was no evidence to suggest that Delta was more or less deadly than previous variants, but two factors were affecting the lower rate of deaths.

"A big factor is that people who are getting infected are younger and they have a lower mortality rate," he said.

"But mainly, we've actually been very much more effective at vaccinating the older population, because they were more at risk."

But Professor Collignon warned that the latest case fatality rate could change because hospitalisations lagged about a week behind infection, and deaths two or three weeks later.

The death rate by age group data showed that in 2020, about 22 per cent of NSW residents aged 80 or more who contracted COVID-19 died.

While the high number of cases has resulted in deaths in younger people, their likelihood of dying from COVID-19 has not changed since last year.

About 70 per cent of people aged 80 or older in NSW have been fully vaccinated and about 90 per cent have had one dose.

The rate of the fully vaccinated falls by age, down to around 18 per cent in those aged 20 to 24.

One big distinction between the outbreaks in 2020 and 2021 has been the toll in aged care.

Up to March 2021, 75 per cent of COVID deaths in Australia were in aged care homes, with case fatality rates between 33 and 46 per cent, according to a new Australian Institute of Health and Welfare report.

Twenty-six aged care workers have tested positive for COVID in the current NSW outbreak, and there have been 15 deaths in aged care residents.

That represents 10 per cent of the total deaths.

Modelling from the Burnet Institute released this week showed that restrictions in the 12 local government areas (LGA) of concern in Sydney, along with the vaccine rollout, had prevented 4,800 deaths.

The additional 530,000 Pfizer doses from Poland that were preferentially allocated to NSW were predicted to have saved an additional 354 lives.

The modelling released by the NSW government this week showed that the number of COVID patients in hospital would peak at about 3,400 in October, but did not predict how many would die.

Professor Collignon said the vaccines were 95 per cent effective in preventing serious disease and death.

"But for mild disease, they may only be 70 per cent effective. So we will see, even in vaccinated, more cases but proportionally there'll be a lot more mild cases," he said.

"There'll be a shorter duration and so overall, we should see the case fatality rate go down."