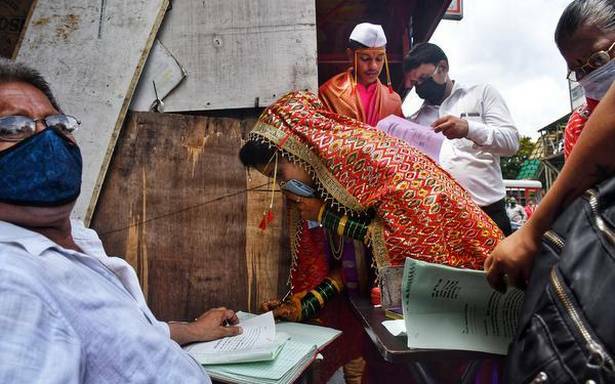 In a landmark decision, the Delhi High Court has ruled that marriages can be registered in the virtual presence of parties, noting it “cannot allow a rigid interpretation of the statute to prevent citizens from exercising their rights”.

Justice Rekha Palli said the insistence of physical appearance of the parties before the Registering Authority even when their personal appearance can be easily secured through video conferencing, will definitely make it more cumbersome for parties to come forward for registration of marriages.

The Judge remarked that the Delhi (Compulsory Registration of Marriage) Order, 2014, which made registration of marriages solemnised in Delhi compulsory, needed reinterpretation to “encourage parties to easily get their marriages registered”.

“In a little over half a decade, since the Registration Order was notified, the universe has undergone a sea change but the Registering Authority, while exercising its power and jurisdiction under the Registration Order is refusing to recognise the reality that with the technology as is available today, web portals and video conferencing have become almost the norm," the High Court said.

“In fact, if not for the acceptance of video conferencing as the norm, this court and the judicial system in this country would have come to a grinding halt, and would not have been able to function at a time, when there was the greatest need for the citizens of this country to have access to justice,” it added.

“These aspects appear to have been simply overlooked by the Registering Authority, who’s continuing to insist on that the parties must remain present physically before him,” the Justice Palli pointed out.

The couple got married at Delhi on December 6, 2001 as per Hindu rites and ceremonies. The couple said they now require a marriage registration certificate for grant of a green card in the U.S., but due to the ongoing COVID-19 pandemic they are unable to travel to India.

Justice Palli also rejected the Marriage Authority’s contention that the physical presence of the parties was necessary to ascertain whether they are of sound mind and are entering into marriage without any fear or coercion.

“Thus, looked at from any angle, I have no hesitation in coming to the conclusion that the term ‘personal appearance’ in Clause 4 of the Registration Order has to be read to include presence secured through video conferencing,” the court declared.

The High Court clarified that the parties seeking registration of their marriage under the Registration Order, will have to submit a physical copy of their application through their attorney and enter personal appearance, as and when required, through video conferencing.