Deaf cricket games on hold due to COVID, but 2022 looks brighter for cricket's extended family 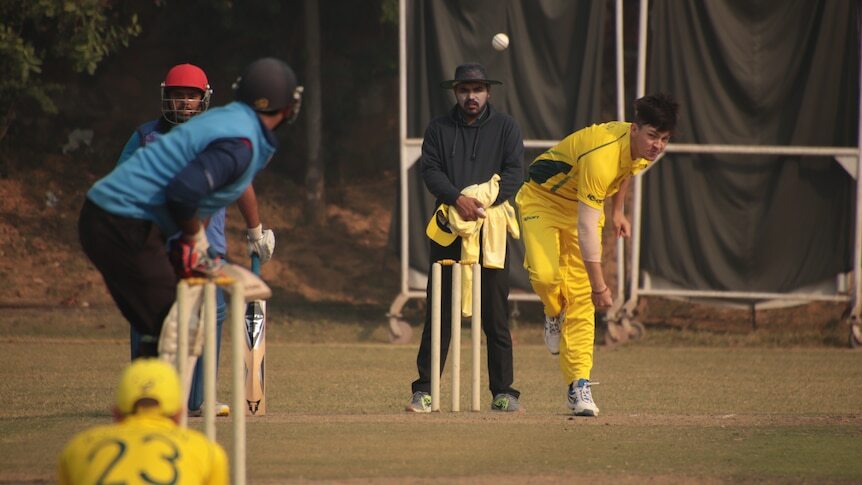 Australia's team, coached by Jason Mathers, missed the final; they've been waiting to play again but COVID has prevented all international competition.

With lockdowns due to finish this year, Cricket Australia has begun scheduling a return to play for disabled squads through a 'satellite coaching program' and training camps.

The National Inclusion Cricket Championships (Deaf, Blind, and Intellectually Disabled) have been pencilled in for next April in Geelong, with squads chosen from that tournament to take part in some international matches in Darwin during winter 2022.

And Mathers thinks it's an important time to recruit players who don't yet know they're eligible to represent their state and country.

"I think there are people out there that don't know that this exists," he says. "And it's a fantastic program and the aim of the program is to get a hard of hearing player, or deaf player, playing in the BBL [or WBBL]."

What is deaf cricket?

The basic rule around eligibility is that if you require a hearing aid you probably qualify.

The technical benchmark is 55 decibels — a quiet conversation without other distractions comes in at about 50 decibels.

Hearing aids are banned during games, so all cricketers are on a level playing field.

Appealing for caught behind is a significant difference between deaf and other cricket games.

"When they beat the bat," Mathers says, "they're genuinely asking the question, "Is that out?', and the umpire says 'yes' or 'no' and they just continue on. There's no hysterics."

Coaches prepare players for potentially dangerous parts of the game, like trying to catch a skied shot or running between wickets, parts of the game that are tricky enough for players without a hearing disability.

There is no Australian deaf team for women.

Cricket Australia is now organising state teams for deaf women and is aiming to have a national women's squad as soon as possible.

The national men's coach was born into a deaf sporting family: his parents Peter and Joan were deaf, and his sister Linda became deaf as a toddler.

"Dad competed in the Australian Deaf Games [in golf], which I attended a lot with him as a caddie," he recalls.

"He was a cricketer, golfer, bowls, he did everything. I think he just liked going away with his mates, really."

He first joined a national deaf Ashes tour as a technical consultant in 2008.

The excellence of the cricketers hooked him.

He took over the top job in 2017 and went to his first World Cup with a young, developing team a year later.

A star bowler on Mathers' World Cup team was Austin Philip, who has gone on to open the bowling for Parramatta in Sydney.

Philip's dream is to become the first deaf player to wear the Baggy Green.

"It does vary a little bit on the level that they play," Mathers said. "But the top players are very, very good."

Perhaps the best Australia deaf player was former national captain Kym Daley, who played more than 100 games of grade cricket and represented the NSW second XI in the early 2000s.

"The idea is to give the top players access to coaching and competition so they can look to go on," Mathers explains. "This will provide the know-how to get them up into playing for their state or Australia eventually."

Some players don't necessarily strive for the bright lights, rather they're happy to play community cricket.

Zac King is a farrier by trade.

He's also an Australian representative who steams in off the long run for Flinders in Victoria's Mornington Peninsula league.

King was tending bar while wearing his hearing aid at Flinders one day in 2017 when the club was hosting a Cricket Victoria function.

Mathews had heard about the young man's talent: he asked King to go and get his hearing officially tested.

"I'd never heard about it [the deaf cricket program]," the player says. "I went and had the test and was eligible and got picked for Victoria."

Soon he was on the Aussie team at the World Cup.

Mathers says the next deaf World Cup will be a 50-over tournament in Dubai.

Hopefully, the Australian team will be there.