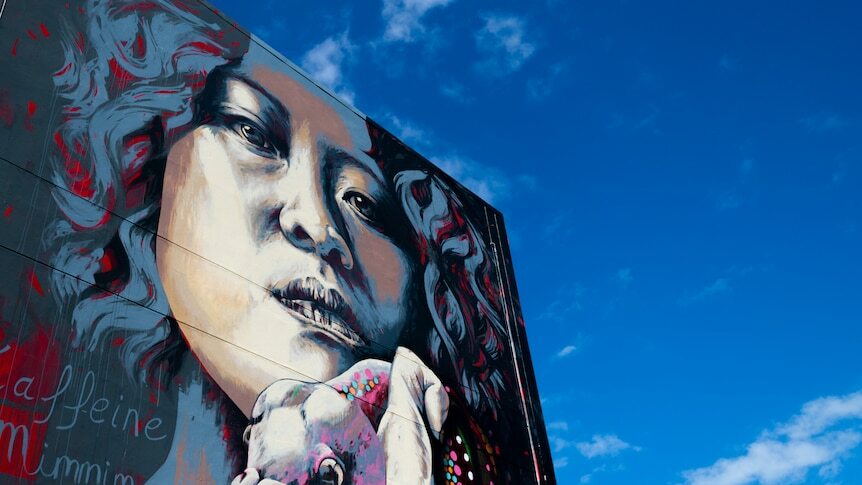 Two street artists have painted a three-storey mural depicting a Larrakia woman holding a powerful python in the back streets of the Darwin suburb of Nightcliff.

The mural on the wall of the Nightcliff Community Bank is part of an expansion of Darwin City's street art into the suburbs and other parts of the Northern Territory.

"The python is a snake dreaming and is one of my favourite native animals," she said.

Ms Cole and Ms Eine, whose artist name is Kaff-eine, talked for years about collaborating together on a mural.

"We wanted to create a piece that reflected the multiculturalism of Darwin," Ms Eine said of the mural, which has yet to be titled.

"The woman represents the diverse women in Darwin, all coming from a variety of backgrounds, and the python is symbolic for a Larrakia artist," she said.

Ms Eine has participated for many years in the Darwin Street Art Festival, which was launched in 2017.

"The honour of painting with a Larrakia artist on Larrakia land is pretty wild … and to get to spend time with my mate and get to know her better while we are painting," Ms Eine said.

For many years, the Street Art Festival has been confined to the borders of Darwin's CBD.

"This year is the start of the journey out of the CBD and into the northern suburbs, and down the highway," David Collins, the festival's director and creative producer, said.

"We are piggybacking off the success of the Alice Springs Street Art Festival," he said.

"We are also stopping in Tennant Creek, and Katherine, to do mini-to-large scale murals there."

In Darwin, street art has been rolled out to suburbs, including Parap, Nightcliff, Casuarina and Wulagi.

Mr Collins said that, growing up in Darwin, there was no artwork on display in public places.

Mr Collins said he hoped expanding street art from Darwin's CBD would assist Territorians on their journey out of the pandemic.

Of the artists who have participated in the festival, 70 per cent are Territorians.

Caleb Schatz, 19, who first took up a brush when he was 16, landed a place to paint a mural around the corner from his house in Wulagi.

Stretching up to 100 metres, it shows off vibrant colours of local insects and plants, all dancing to the sound of music.

"I started with the songbirds and dance bugs and sort of creating a bird imagery," Mr Schatz said.

"And the bugs. I tried to make them look as if they're giving a little boogie," he said.

"I hope people can see my wall and take photos and be inspired to do their own art."

With the Darwin Street Art Festival expanding each year, artists say no wall is safe.

"Now we have building owners approaching us, wanting us to do murals on their buildings. It's getting easier to find canvases," Mr Collins said.

The festival is funded by the Northern Territory government with the aim of revitalising the streets and attracting art enthusiasts to the Territory.