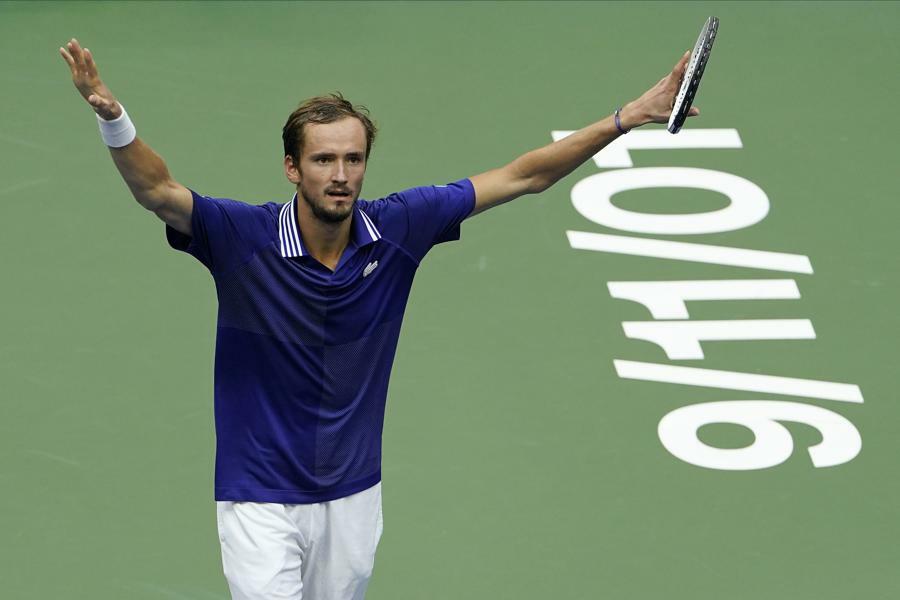 It has been 52 years since a male tennis player — the Australian great Rod Laver — won the calendar Grand Slam.

And it may not happen for another 50 years, either.

World No. 2 Daniil Medevev brought a sudden and dramatic halt to Novak Djokovic’s bid to become the sixth member of the elite Grand Slam club, overpowering him with his serve and outplaying him from the baseline, 6-4, 6-4, 6-4, to win the U.S. Open championship in a jam-packed and electric Arthur Ashe Stadium that included Brad Pitt, Bradley Cooper, Alec Baldwin, Ben Stiller, Spike Lee and the 83-year-old Laver, who sat in the first row wearing a suit and cap waiting to see if his feat would be matched.

An emotional Djokovic sat crying in his chair during the final minutes of the match as the inevitable wave of defeat — and the love from the crowd he has long craved — washed over him.

“I would like to start off by saying congratulations to Daniil,” Djokovic said on court after the match. “Amazing. Amazing match, amazing tournament. If there’s anyone [who] deserves a Grand Slam title right now, it’s you. I wish you many more Grand Slams to follow, I’m sure that you will be on this stage many more times in the future again.”

Before the tournament, Medvedev had said, “We are here to not let him win the U.S. Open. If I talk just for myself, I want to win the US Open. I don’t care if it’s a final against a qualifier or against Novak, I just want to win this tournament.”

Upon winning the title, he was more humble, even bestowing GOAT status upon Djokovic.

“I’m so nervous saying my speech,” he said. “Sorry for you fans and Novak because we all know what he was going for today. What you accomplished this year and throughout your career, I’ve never said this to anybody but I’ll say this to you now, for me you are the greatest tennis player in the history of the game.”

Djokovic, 34, was also bidding to surpass rivals Roger Federer and Rafael Nadal with his 21st major — which surely would have cemented the GOAT status in the minds of many — but will remain tied with his rivals at 20. For the time being, anyway.

Was it the fatigue? The pressure? Or did the 6-foot-6 Medvedev just play the match of his life?

Medvedev "executed his game plan very well,” Djokovic said. He added that “my legs were not there. I was below par with everything. It was one of those days where unfortunately it wasn't meant to be....Full credit to his mentality, his approach, his game. He absolutely was the better player, no doubt about it.”

Djokovic had captured the Australian Open, French Open and Wimbledon and had won 27 straight matches entering the U.S. Open final. The last Grand Slam match he lost was the 2020 French Open final to Nadal. Before that he was defaulted in the fourth round of the U.S. Open for accidentally hitting a line judge in the throat with a ball.

No one had come this far and not won the Grand Slam since Serena Williams captured the first three majors in 2015 before being upset by Roberta Vinci in the Open semifinals. Steffi Graf in 1988 won the “Golden Slam” — all four majors plus Olympic gold. Djokovic, it should be pointed out, has previously held all four majors at once after winning Roland Garros in 2016.

Meantime, after losing his first two Grand Slam finals — the 2019 U.S. Open final against Nadal and the Australian Open final in February to Djokovic — Medvedev is finally a Grand Slam champion. His victory called to mind the Argentinian giant Juan Martin del Potro, who dominated Federer and Nadal en route to the 2009 title.

Djokovic’s path to the final was much more difficult than Medvedev’s. The Serb lost six sets coming into the final (and now nine altogether), while Medvedev dropped just one en route to the title. Djokovic endured a 3 1/2 hour quarterfinal against Wimbledon runner-up Matteo Berrettini and then a 3 1/2 hour, 5-set semifinal win over Olympic gold medalist Sascha Zverev.

Medvedev roared out of the gate, breaking Djokovic in the first game of the match when the Serb smacked a forehand wide. Medvedev quickly consolidated for a 2-0 lead and served eight aces in the first set, including a 119-mph stinger on set point.

Considering Djokovic had dropped the first set in his previous four matches, this was no big deal for him.

Djokovic had two chances to break the Russian in the fourth game of the second set, and the crowd was cheering him with chants of “No-vak, No-vak.” After missing a return, a frustrated Djokovic smashed his frame on the ground and broke it. He was given a warning for racket abuse and Medvedev went on to hold.

Djokovic then got broken when he attacked the net and flubbed a low backhand return well out. Medvedev led 3-2 and clenched his fist to the crowd.

The Russian closed out the second set authoriatively on his serve, delicately returning a crosscourt drop volley into the corner for a winner that brought him to triple-set point. When Djokovic hit a backhand wide two points later, the Russian was up two-sets-to-love.

Djokovic did not leave the court after the second set as he could have, preferring instead to remain on court and meditate.

But it didn’t matter.

Medvedev immediately broke for a 1-0 lead.

He then hit a superb forehand passing shot off a low volley for a 2-0 lead.

When Djokovic raced forward on break point and pushed a forehand volley wide, he was down a double-break in the third set 3-0.

Serving for the match at 5-2, Medvedev got down 15-30 but then banged a service winner and watched as Djokovic slapped a forehand long to bring him to match point.

With the title on the line, Medvedev had to wait as several fans screamed and made noise. He then double-faulted twice to give Djokovic a break point, and then slapped a forehand into the net to give Djokovic his first break of the match.

Medvedev had another shot to close it out. After smacking a forehand into the open court for 40-15, he had another two match points. He double-faulted on the first and hen served a 129-mph service winner before lying down on the court and then embracing Djokovic at the net.

Djokovic had been asked repeatedly during the fortnight about bidding for the Grand Slam and never denied he wanted to make history.

When his bid finally came up short, he was magnanimous: “I would like to say that tonight even though I have not won the match my heart is filled with joy and I’m the happiest man alive because you guys made me feel very special. I’ve never felt like this in New York, I love you guys. Thank you. I love you and I’ll see you soon.”

Asked his emotions when it was over, he added: “"Relief, I was glad it was over..At the same time I felt sadness and disappointment and also gratitude towards the fans for that special moment they created for me on the court.”