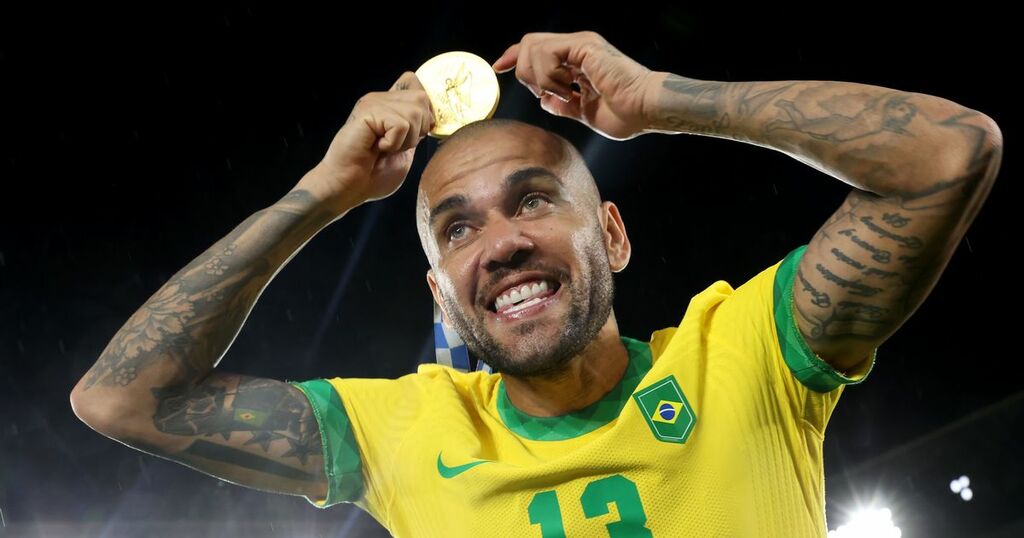 Veteran full-back Dani Alves has become a free agent just one month after captaining Brazil to the football gold medal at the Olympics.

The 38-year-old - who won his 119 th international cap for the senior squad during the recent international break - has left Sao Paulo, his boyhood club.

Alves joined the Brazilian side two years ago and was the highest paid player in South American football, but the outstanding monies owed to him by the club have led to his departure.

Sao Paulo’s inability to meet the player’s wages has amounted to the right-back being owed an amount close to £2.5million, which led to Alves not reporting back to the club's training base following this month’s international break.

The club stated: "We were informed by his representatives that Daniel Alves will not return to Sao Paulo until there is an adjustment of the financial debt that Sao Paulo has with the player."

Subsequently, coach Hernan Crespo has informed the player that due to the situation he could no longer count on his services - meaning that Alves is now a free agent.

The former Sevilla, Barcelona, Juventus and Paris Saint-Germain player had a career-long ambition to join the Brazilian side, whom he supported because of his father.

Alves had said upon his signing at Sao Paulo in 2019: "Do not stop believing in your dreams because they are possible. Now, after having gone around the world, it is the first club that I wear the shirt and I am a fan. It is a thrill to receive this mantle, and the moment has come."

His move to Sao Paulo has seen him wear the number 10 shirt - typically reserved for playmakers - while he scored 10 goals and provided 15 assists across 95 appearances for the club.

The player’s exit will be seen as a significant blow to the club and for the player personally due to the circumstances of his exit - with his next step now unclear.

Now aged 38, Alves was inspirational in helping his nation land the Copa America title in 2019 - when he was named as Player of the Tournament - when he had also been the team’s captain in place of Neymar.

Alves is hoping to now prolong his glittering career with the international side, for whom he has won four trophies - the last Copa America title was added to the 2007 version, while he has also played a crucial role in the Confederations Cup winning teams of 2009 and 2013.

Indeed, the veteran has won more trophies throughout his professional career than any other current active player - winning a total of 41 tournaments at senior level over a 19-year period, alongside the gold medal at this summer’s Olympics.

He won the Copa do Nordeste at Brazilian minnows Bahia before adding five trophies at Sevilla - including two UEFA Cup crowns and a Copa del Rey - before a glorious spell at Barcelona where he totalled 23 trophies, including six La Liga titles and three Champions League winning medals.

Alves went on to win the domestic double at Juventus in 2016-17 before winning six trophies across two seasons at Paris Saint-Germain, whom he left in 2019 to return to Brazil to play for Sao Paulo.

Which club should Dani Alves join now? Let us know what you think in the comments section below

The Brazilian has previously spoken about his regret at not playing in the Premier League, having come close to joining Manchester City in 2017 upon leaving Juventus - but instead signing for Paris Saint-Germain.

Alves explained to SporTV : "I regret not going to Manchester City to work with Guardiola again.

"When you are with people like him [Guardiola], who always finds a way out, it adds a lot to you. My regret was not having gone to work with him again.

"But not for PSG, because the story that I lived at PSG was incredible."