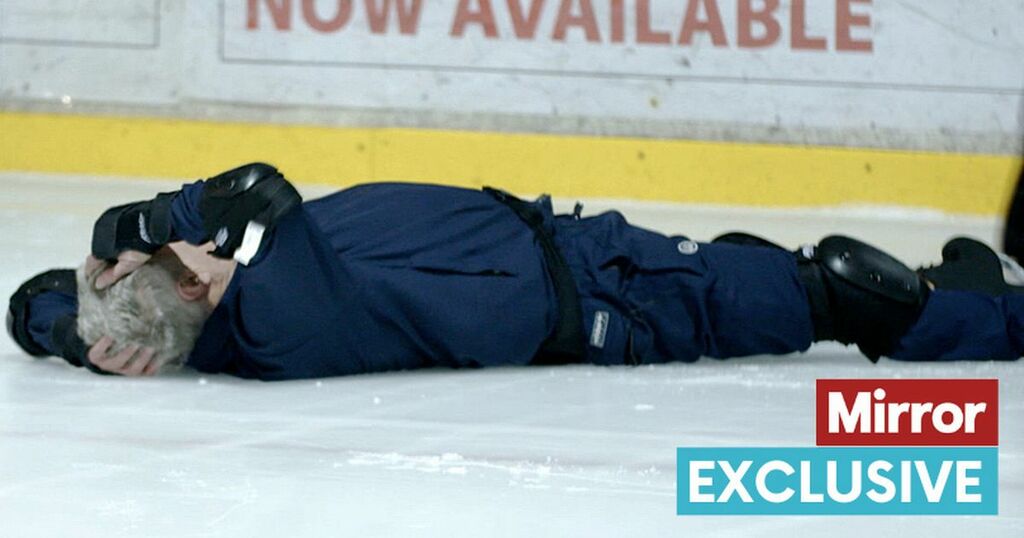 Happy Mondays legend Bez insists he is chilled about his horror fall in Dancing on Ice rehearsals and can’t wait to skate for the nation.

Mirror Online broke footage of the 57-year-old slipping backwards and smashing his head on the rink.

The blow sent his helmet flying and dance partner Angela Egan raced over to check on him. But when Bez tried to get up he slumped back down again.

A show source said: “Everyone’s hearts were in their mouths when he hit the ground. It goes to show how brutal this programme can be.”

But Bez, who has dubbed himself “Frank Spencer on Ice”, joked that coming a cropper was “a daily occurrence for me”.

“If I don’t bang my head on the ice I don’t feel I am doing it properly,” he said.

Despite his struggles, the star insists he has since improved.

“I’ve made a huge step and I only fell over once yesterday, which is really good for me. So yeah I am hoping to get through a full session without falling.

“I definitely have more Frank Spencer moments than any man I know.”

Speaking earlier this week Bez said he relished the risks involved in skating,

“I love a bit of danger!” he joked. “And with the right coaching and training... fingers crossed.”

He also said he knew little about the show but was relishing the chance to learn a new skill and continue his recent fitness push, despite his early efforts being more like “Bambi on ice”.

“I’d never watched it before,” he said. “But I watched a little bit of last year’s because I was thinking of auditioning.

“I’ve been keeping fit this past year. So this keeps my fitness going and it’s another challenge.

“I’m really looking forward to dancing with a partner on ice. Not actually something I ever imagined doing in my life.” Meanwhile, fellow contestant Brendan Cole says he will be “respectful” to the judges – despite his reputation.

The former Strictly dancer regularly clashed with the likes of Len Goodman if they criticised him on the BBC show.

But he won’t give any backchat to Torvill and Dean, Oti Mabuse or Ashley Banjo, regardless of how harshly they criticise him and partner Vanessa Bauer.

Brendan, 45, said: “I have no interest in answering back any of the judges on this particular show.

“You won’t see the young upstart you saw on Strictly you’ll see the respectful, old BC now.”