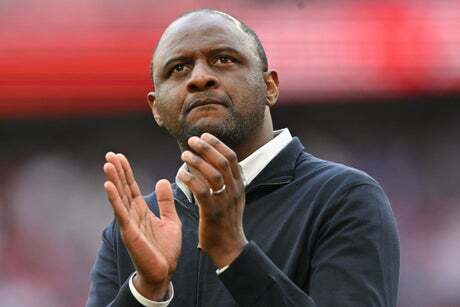 The 19-year-old made his first-team debut in August and could earn more minutes before the season ends.

Gallagher has enjoyed a fine season on loan at Selhurst Park

The Chelsea loanee is one of several key decisions which Palace will be involved in this summer.

The 18-year-old left-back made his first-team debut in the FA Cup this season against Hartlepool and started the fifth round win against Stoke City at Selhurst Park. He has also received international recognition with Ireland Under-19s and, on Tuesday night, was voted Palace’s Under-18 player of the season at their awards night in Croydon.

He is one of several academy players to have impressed this season and has joined Under-23s winger Jesurun Rak-Sakyi in training with Vieira and the first team on several occasions already. Rak-Sakyi has already made his Premier League debut off the bench on the opening day of the campaign against Chelsea while Adaramola was an unused substitute against the same opposition during the reverse fixture at Selhurst Park in February.

The pair have both been involved in sessions since their respective seasons came to an end and are now set to get a chance to impress at some point in the last three games. It will also be a good chance for Vieira to see how they can perform under pressure in the top-flight and to see how they are integrating with the first team.

“I think [this] is important as it is part of their development,” the Frenchman told football.london. “It’s good to see them around the first team and to see their personality and how they conduct themselves in training and in the dressing room with the other players. That will allow me to learn more about them.

“We have Jes and Tayo with us who have been training with us since the academy has been closed. They will be around the first team for the next three games and for some of the games they will be on the field. We need to create those kinds of opportunities to see how they will react under pressure.

“Jes and Tayo show that they can play in our team and in the Premier League, it’s just about having the right players around them to support what they are missing. The balance has to be right to allow them to play with confidence and belief.”

According to the Athletic, there is a level of regret at Crystal Palace for not sending Rak-Sakyi out on loan during January, where several of his Under-23s teammates such as Rob Street and Jake O’Brien were sent out to get first team experience down the football pyramid.

Instead of heading out on loan, Rak-Sakyi continued to play for Paddy McCarthy’s Under-23s where he finished as the Premier League 2 joint top-scorer with 18 goals plus five assists from 25 starts. His development has clearly reached its peak at that level, leaving Palace with a decision to make this summer of integrating him into the first team full-time or finding the right club - likely in League One or the Championship - to send him on loan.

But even identifying the right club is a challenging task, as Palace found in January when plenty of clubs were interested in taking Rak-Sakyi in. Palace need to send players to clubs knowing they will get regular game time rather than be dropped from the team when they inevitably make mistakes. That, as Vieira explains, is more and more difficult in a results-driven business.

“When we send a payer on loan we should know everything about the club that we are sending the player to,” he added. “Some of the players will need to keep playing week in and week out and to keep making mistakes which will allow them to grow as a player and to learn. We have to find the right place where those young players can improve themselves.

The 19-year-old made his first-team debut in August and could earn more minutes before the season ends.

Gallagher has enjoyed a fine season on loan at Selhurst Park

The Chelsea loanee is one of several key decisions which Palace will be involved in this summer.