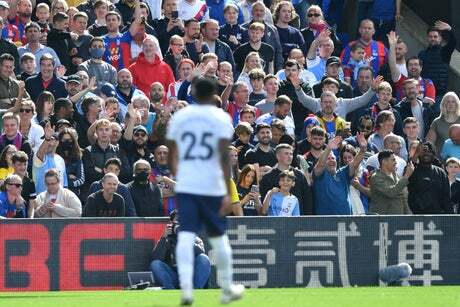 The sense of crashing back down to earth should be a familiar one for Tottenham.

Last season under Jose Mourinho was punctuated by short spells of often-underwhelming victories, which only masked the side’s limitations, before their progress was abruptly ended by a bad performance.

It was the same story on Saturday, as Spurs’ perfect start under Nuno Espirito Santo came to a shuddering halt with a wretched 3-0 defeat by Crystal Palace.

Before the international break, Spurs battled to 1-0 wins over Manchester City, Wolves and Watford, while creating little and occasionally riding their luck defensively.

In hindsight, they were results built on fine margins and this weekend’s reality check had arguably been coming.

There are significant mitigating factors for Nuno, who lost five key players during the break and both his starting centre-backs before the hour at Selhurst Park; Eric Dier to injury and Japhet Tanganga to a reckless red card.

Nonetheless, the manager’s needless caution was costly and spoke to the most frequent criticism of him at Wolves: that his tactics are too reactionary and negative.

In the absence of Heung-min Son and Steven Bergwijn, Nuno set up with three holding midfielders, leaving Spurs without a creative spark and far too much of the same thing.

Even as Palace took control after Dier was forced off on 12 minutes, Nuno failed to react and he made no changes at the interval.

Spurs had mustered one shot by the time Nuno finally called for Bryan Gil from the bench but by then it was too late. With the Spain winger stripped off and ready to go, Tanganga was sent off and Nuno introduced another defender in Ben Davies instead.

Perhaps the most damning aspect of the Portuguese’s inaction was his refusal to throw caution to the wind after Wilfried Zaha gave Palace a 74h-minute lead from the penalty spot or even following the first of substitute Odsonne Edouard’s two goals 10 minutes later.

On appointing Nuno, Tottenham were keen to emphasise his ability to “adapt”, suggesting the club believed his caution at Wolves was the result of pragmatism rather than ideology.

The hope was that Nuno would adjust his approach to suit a bigger, more top-heavy squad and the greater expectation at Tottenham to play the “free-flowing, attacking football” championed by chairman Daniel Levy.

Even considering the difficult circumstances, Nuno’s decisions at Palace were grimly rigid, anything but adaptable and suggestive of a risk-averse mentality that will prove incompatible with Spurs in the long-term.

Nuno appeared to recognise the problem afterwards, admitting his side’s lack of creativity was “a big concern” but the defeat must be a catalyst for the head coach to prioritise injecting more verve and adventure into his side.

Mourinho’s unwillingness to release the shackles and play to his squad’s obvious strengths came to be the biggest failure of his tenure, but he was unwilling or unable to change his containment-first approach, even as criticism mounted.

Nuno still has credit in the bank after a fine start but to be a success in north London, he needs to learn from Saturday and ensure the display proves the exception and not the norm.

Spurs were on Monday still assessing Dier after the defender had a scan on the thigh injury sustained in a clash with Palace’s Jordan Ayew.

There was growing hope, however, that Son (calf) and Bergwijn (foot) could be fit for the visit of Chelsea on Sunday.