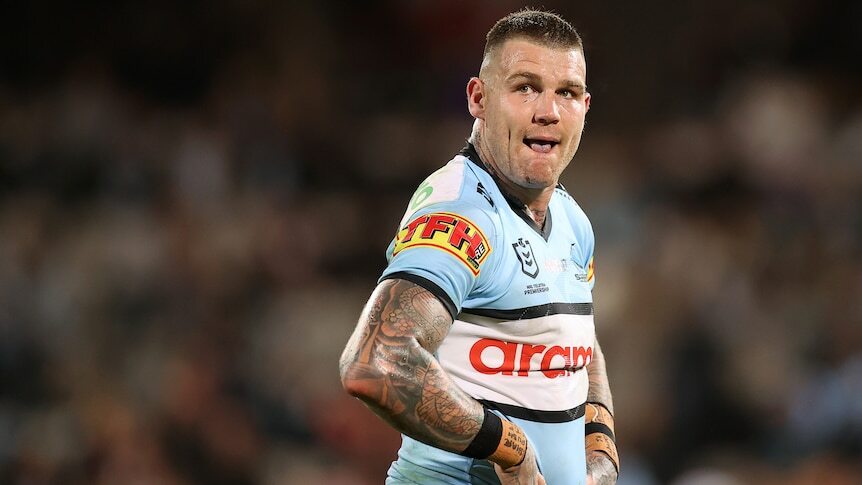 Josh Dugan has called time on his NRL career, after the Cronulla Sharks sacked the former Australian and NSW representative following a second breach of the league's COVID-19 protocols.

The Sharks confirmed on Friday afternoon they had terminated Dugan's contract following a review and an internal hearing process.

The club released a statement saying Dugan's management "mutually" agreed to the immediate termination of his contract.

Dugan revealed he would be retire from the NRL, making the announcement shortly after the Sharks released their statement.

"It's been a roller coaster throughout my career but due to my support network and my own grit and determination [I] never gave up or took an easy option, in doing that I got to represent my country and state whilst playing over 200 games," he wrote on Instagram.

"To my teammates over the years thank you, staff and coaches alike thank you. [I] Made some lifelong brotherhoods and had some unreal opportunities.

"My next chapter involves community work and hopefully running my own business."

Dugan, who was selected for only eight matches this season, was already off contract at the end of the season and was not going to be re-signed.

But the decision to axe the 31-year-old means he will not be paid the final two months of his salary, worth $850,000 a season.

The cost of his two NRL breaches will now be in excess of $200,000 when factoring in NRL and club sanctions along with the lost earnings.

Dugan will still face Lithgow Local Court on October 7 after being charged with breaking public health orders for the second of the breaches last month.

He and a friend had been pulled over twice in the state's central west and ordered to return home.

Police at the time alleged the pair told them they were moving to the area and were going to feed animals before saying they were visiting a friend.

He joined the Sharks from St George Illawarra ahead of the 2018 season.

Dugan played with Canberra before linking up with the Dragons in 2013. He made his first-grade debut with the Raiders in 2009.