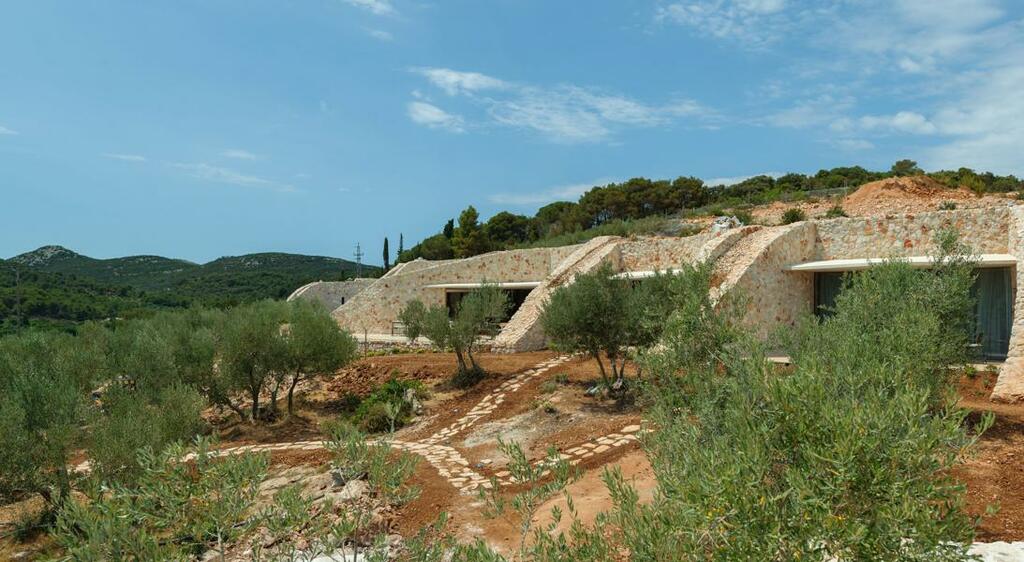 Maybe you’ve heard of Hvar, the most famous of Croatia’s Dalmatian islands, known for its nightlife and beaches (and a great new hotel). And if you’re really into Adriatic Islands, you might know about Korcula, with its “little Dubrovnik” village, and Brac and its white pebble beaches and windsurfing sites. But you’ve probably never thought about Dugi Otok, an arid island with fewer than 2,000 people.

For the proprietors of Villa Nai 3.3, that’s a big part of the island’s appeal.

The owners had their success in the construction business, and when they decided to build a small, ultra-luxury resort on their land outside the small village of Zman, they had access to top architects, engineers, and craftsmen. This allowed them to build something extraordinary—something that matched their under-the-radar island, with its close connection to olive groves and the marine-blue Adriatic Sea.

Saying it’s built into the rock of the island sometimes gives people the wrong idea, admits Lana Galic, the Croatian general manager of the hotel. They get the impression that it’s a bunker.

But that’s hardly the case. Rather, renowned Croatian architect Nikola Basic came up with a design that’s integrated with the landscape in a way that few places are. Construction crews cut into the island’s natural rock, and then used stone that they quarried to build the hotel. They put green roofs on top. It’s nestled into the hill behind it so that it’s invisible from behind, and from the front, it appears to be part of the landscape.

Its footprint follows the contours of the landscape, meaning there are very few right angles. Galic points out that the floor tiles are not a uniform shape, a design decision—and engineering challenge—meant to add to the natural feel.

And then there’s the light. Most of the front of the hotel is glass—a special glass that’s so thin and transparent that they had to affix subtle decals to prevent people (even the staff) from walking into the sliding doors. The five rooms and three suites are suffused with light, and decorated with natural materials to play that up. So no, it’s not a bunker at all.

The rooms look out over the swimming pool, the Adriatic Sea in the distance and fields of olive trees in the foreground. Long before Villa Nai 3.3 existed as a hotel (it opened in July), the property was an important producer of extra-virgin olive oil. It’s a tradition that goes back five centuries, and in recent years, the oils have won a slew of awards.

The hotel’s curious name comes from the olive oil tradition. Nai was the old Dalmatian-language word for “snow,” and there used to be an average of 3.3 days of snow there each year—a climactic quirk that was said to give the oil its distinctive characteristics.

The snows stoped a long time ago. Now the island is warm and dry almost all of the year. The main thing you notice is the quiet. “We call it luxury redefined,” says Galic. “Space, silence, the human touch, warmth, nature.”

(Speaking of human touch, the staff—some 28 people—is impressively international. The massage therapist is from Bali, and an expert in Balinese massage.)

The main thing to do at Villa Nai 3.3 is nothing. But for guests who want to explore, Dugi Otok isn at the edge of the Kornati National Park, a group of 89 stunning islands, some with dramatic cliff formations and others with Roman ruins. They’re mostly uninhabited, but a few have fishing villages where a few dozen residents live a life outside of time.

Some of them have opened traditional restaurants for the tourists who come to the islands to sail, snorkel, dive and swim in the beautiful bays. The fresh fish and seafood, of course, are delicious.

Also delicious is the food at the hotel. The two restaurants are overseen by Galic’s husband, Denis. Inside, the fine-dining restaurant serves a seven-course pescatarian tasting menu with fruits and vegetables from their own garden. Outside, the Grotta 11,000 restaurant (named in a tribute to the oldest Dalmatian, who lived in the caves of Dugi Otok 11,000 years ago) serves fish, seafood, meat and vegetables cooked caveman-style, over an open fire. At both, the wine offerings are exceptionally good, as both Lana and Denis Galic are sommeliers, and they have another on staff.

It’s completely unexpected on a remote island of that size. But the owners knew what they were doing. Putting their project so far off the tourist map gave it a feeling of remoteness and privacy, but also the improbable luxury of discovering an island that hardly anyone else knows.