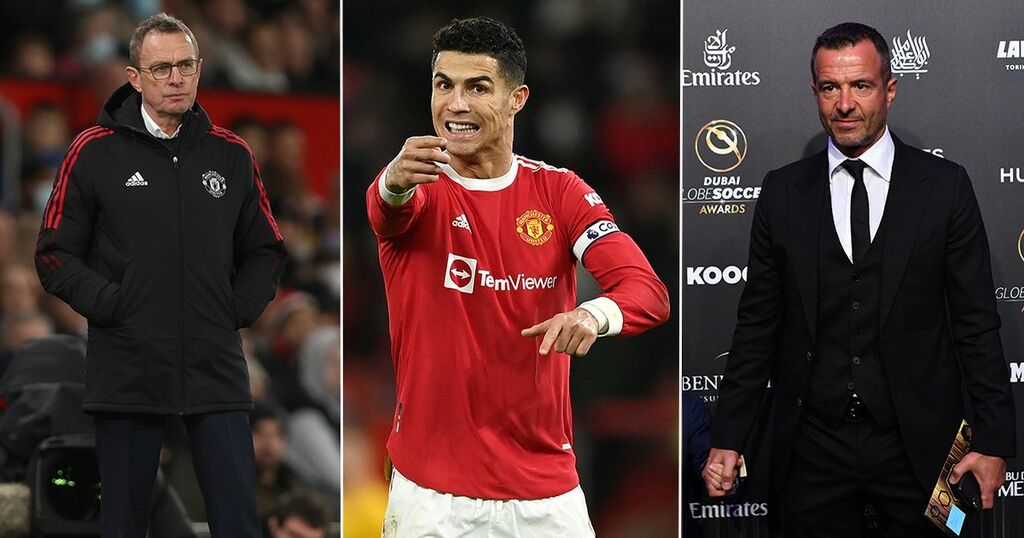 Manchester United ace Cristiano Ronaldo has held "crisis talks" with his agent Jorge Mendes about the team's recent form, according to reports.

The Portugal international, who turns 37 next month, has scored 14 goals in all competitions since his return to Old Trafford in August.

United have struggled, however, slumping to seventh in the Premier League and suffering an early exit in the EFL Cup.

The Red Devils are still in the Champions League, although they aren't expected to win it, and could see their hopes of winning a trophy this season dashed if they lose to Aston Villa in the FA Cup on Monday evening.

It's believed Ronaldo and Mendes discussed three topics during their private meeting.

Have Your Say! Should Cristiano Ronaldo leave Old Trafford in January? Let us know here.

"Jorge came to see him and they spent time chatting through how things are going, what they think are the problems, how they might be solved and what the solutions may be," a source close to Ronaldo told The Sun.

It's obvious things are not going well for United at this moment in time, although it's tricky to identify what their exact problems are.

"If Ole [Gunnar Solskjaer, ex-United manager] walked in here now I'd grab him and say, 'Why are you playing Fred?'" raged Red Devils icon Roy Keane in November.

Brazil said: "Midfield's not good enough for a start. I don't really want to bring McTominay into it, I think McTominay's a great sitter, he sits there in front of the back four.

"It was only several weeks ago where we were saying 'He's coming on, he's got a bit of authority about him now, give me the ball, I won't give it away.'

"He needs a hard working player alongside him and Fred is not the answer. With the greatest respect to Fred, he tries his hardest, he's not good enough."

When asked for his opinion on Brazil's show, United legend Bryan Robson added: "That solid base has got to be there.

"With the type of players we’ve got, we’re brilliant at counter-attacking in certain games. You’ve got to get that base right so you’re not giving goals away and encouraging the opposition on top of you.

"With people like Ronaldo, [Marcus] Rashford, [Anthony] Martial, [Mason] Greenwood – they’ve proved that they’re really good at counter-attacking. But you need that solid base."

On how these problems can be solved at United, it's up to interim manager Ralf Rangnick to find the answer.

Although his current role is temporary, Rangnick will start a two-year consultancy gig at the end of the season and will have a say on the team's style of play moving forward.

That gives Ronaldo another problem, however, as he's said to be "disillusioned" with Rangnick's tactics and footballing philosophy.

And with the German not going anywhere anytime soon, the "solution" for the five-time Ballon d'Or winner could be a transfer.

As to where Ronaldo could go, his best option may be Paris Saint-Germain. The French giants are said to be looking for a new striker, with Kylian Mbappe's contract expiring in June.

A move to PSG would allow Ronaldo to continue playing in the Champions League and see him finally link-up with long-term rival Lionel Messi.

It's clear there are problems at United right now, the question is whether Ronaldo is one of them. Some believe he is... and, if that's the case, a transfer is the only answer.