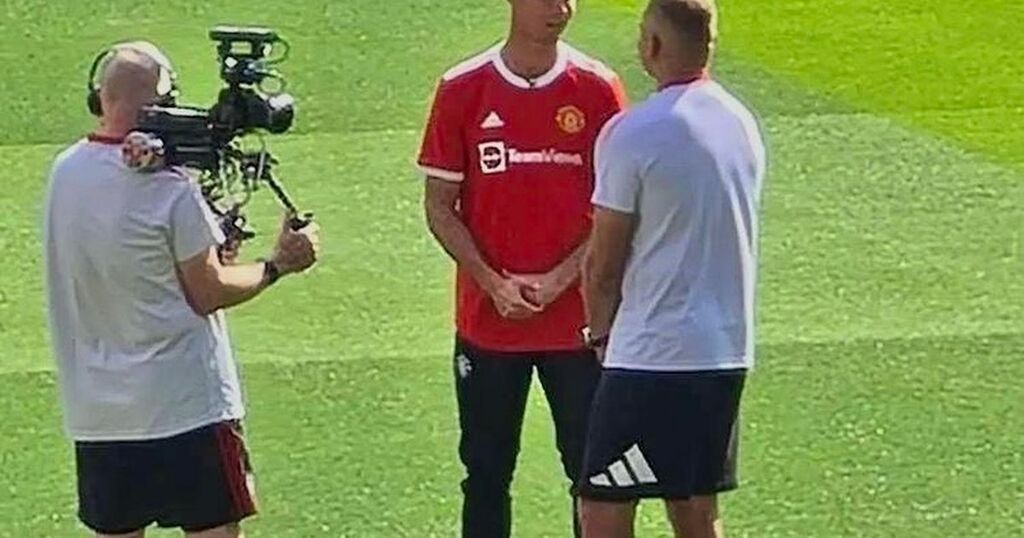 Cristiano Ronaldo has been spotted checking out Old Trafford ahead of his second Manchester United debut on Saturday.

The 36-year-old has returned to the club after 12 years away and is in line to feature when the Red Devils welcome Newcastle in the Premier League.

Handed back the iconic No.7 shirt, Ronaldo is set to receive a rousing reception following his £12.9 million transfer from Juventus, training with his new teammates during the week after leaving international duty with Portugal early due to suspension.

The five-time Ballon d'Or winner also met with manager Ole Gunnar Solskjaer at Carrington as images were released to the delight of United fans across the globe ahead of his emotional homecoming.

Revealed on Thursday, Ronaldo was spotted on the Old Trafford pitch alongside Wes Brown, who assisted the forward's goal in the 2008 Champions League final when the Red Devils beat Chelsea.

Brown now works at the club doing media work and appeared to be filming with the five-time European Cup winner.

Solskjaer will have to decide how to utilise Ronaldo as Steve Bruce and co come to town in search of what would be a shock first win of the season for the Toon Army.

Ronaldo will surely revel in the atmosphere and is looking forward to being reunited with the United faithful, telling he the club's website : "Well, the fans is the key of football. Now, with all the stadiums full of supporters, it’s not the same that we had one year ago, those empty stadiums.

"I know they still sing my music which has made me feel even more happy and my commitment is to give everything on the pitch, like I did before, like I do it all the time, and try to do my best, help the team score goals, make assists, win games, and I hope to see them very, very soon."

Solskjaer added: “Of course the fans have been excited for the last couple of days, we all are of course.

"He has had such a great career and he has been here before," the Norwegian continued.

"I played with him, he's a great player, he is a top human being, he is a top professional, so he will give everybody in the squad and everybody around the club a buzz."

The Red Devils boss will be unable to call on midfielder Fred for the visit of Newcastle.

All Brazilian players who were called up by their nation but did not travel due to it being a red-list country, barring Everton's Richarlison, will not be allowed to feature after FIFA invoked a five-day ban of them.

It means Fred will also miss United's trip to face Young Boys in Switzerland on Tuesday.