"Covid has got a hold of me. I love you": Veteran's touching last words before he died from coronavirus after cruise with family 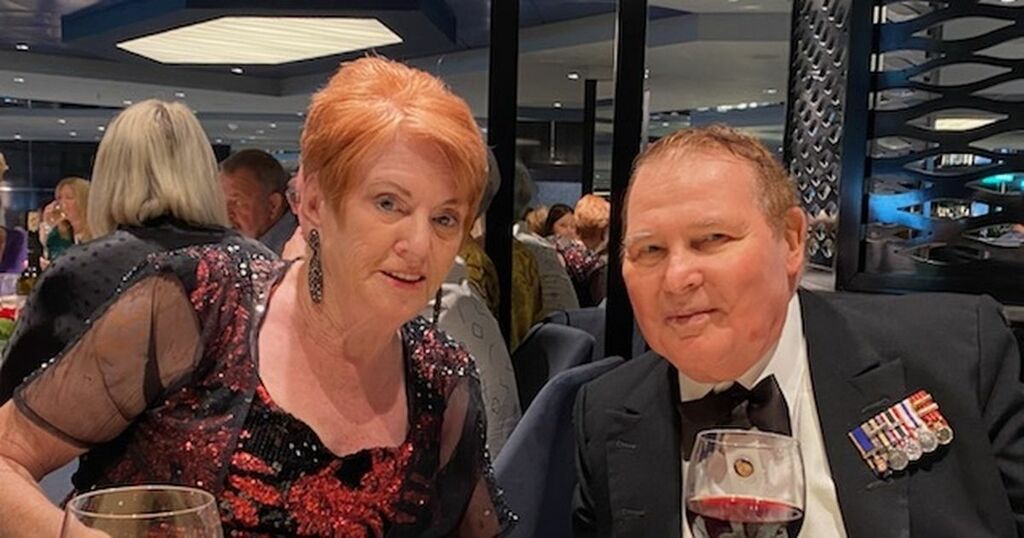 An 81-year-old veteran and grandad has died with coronavirus days after taking a week-long cruise with his family.

Wilf Broyden died last Sunday after going on a seven-day cruise around the British Isles on MSC Virtuosa.

A spokesman for the cruise line said they were 'devastated' by the news of Mr Broyden's death, reports The Echo, while stating safety protocols were followed at the start of his holiday.

MSC says more would have been done if Mr Broyden and his family had reported their symptoms to crew when he began to fall ill.

The family say they weren't aware the symptoms were related to coronavirus at the time.

The family says there were signs of a Covid infection aboard the ship during the week - with their children asked to go for tests and isolated incidents of people seen coughing and apparently struggling to breathe.

Five days into the cruise, Mr and Mrs Broyden began to feel unwell, and spent the final portion of the trip in their cabin - staff were not informed and therefore no tests were carried out.

Mr Broyden, who had Non Hodgkin's Lymphoma and was classed as "high risk", had been given the all-clear by his GP to go on the cruise after taking blood tests.

By the end of the trip he had requested a wheelchair from the Virtuosa crew as his mobility became seriously restricted.

He left the ship in Liverpool on August 24 and was transferred to Arrowe Park Hospital, where he tested positive for Covid.

Mr Broyden was given pure oxygen and his condition improved briefly before he died five days ago.

His wife was unable to visit him during his final hours at the hospital as she also tested positive for Covid not long after leaving the Virtuosa, along with her eight-year-old grandson.

Mr Broyden's last words to his wife were on the phone, from the ward, when he told her: "Carol, I'm dying. Covid has got a hold of me. I love you."

Mr Shelley said: "It was our first cruise and we thought it might be a good time to get away. Wilf had been given the all-clear by his doctor to go.

"When we got to Southampton, it seemed like another 2,000 people boarded and the ship was suddenly chocker.

"There were queues for the lifts and people generally weren't wearing masks. I was, along with Sue and Wilf, but many weren't.

"We've all been double jabbed with the vaccine. We believed the ship was a safe environment."

During the cruise some passengers were kept in isolation on board after having tested positive for coronavirus, or coming into close contact with those with the virus.

New screens were set up in the dining room and new signs were erected to remind people to remain safe.

A spokesman for MSC Cruises said: "First, we are devastated to have learned of the passing of a guest and want to extend our deepest condolences to his family, loved ones and friends.

"We have since made contact with the family to understand the situation, offer any help we can give and share our condolences.

"We always feel a strong duty of care and responsibility for our guests.

"Our records show that in line with our health and safety protocol all members of his party tested negative before embarkation including the guest in question.

"Mid-cruise, also in line with the protocol, the three children in the group – as they were non-vaccinated - were tested, all returning negative results.

"The adults, who were all fully vaccinated, opted not to have any further tests and did not report any symptoms to our medical staff while onboard nor showed any temperature during the multiple daily checks available throughout the ship.

"Of course this situation is deeply distressing for the family but we truly wish they could have alerted us to any of their concerns regarding their own health whilst onboard so we could have activated further measures under our protocol to protect them, our crew and the communities we visit.

"We would have provided tests and further, more prompt medical care and attention, as well as a carefully managed disembarkation in cooperation with the local health authorities again both for their protection as well as that of other guests and crew.

"This is how our protocol works to protect everyone on board and involved with our operations.

"In any case, we are again truly sorry to hear what happened and will remain in close contact with the family of the guest in question."

MSC Cruises said they had strengthened Covid protocols in line with rising rates ashore including increased testing on board in order to identify any suspect cases, isolate them and provide immediate medical assistance.

Crew in hazmat suits were deployed because of additional sanitisation and cleaning that requires additional personal protection when being carried out.