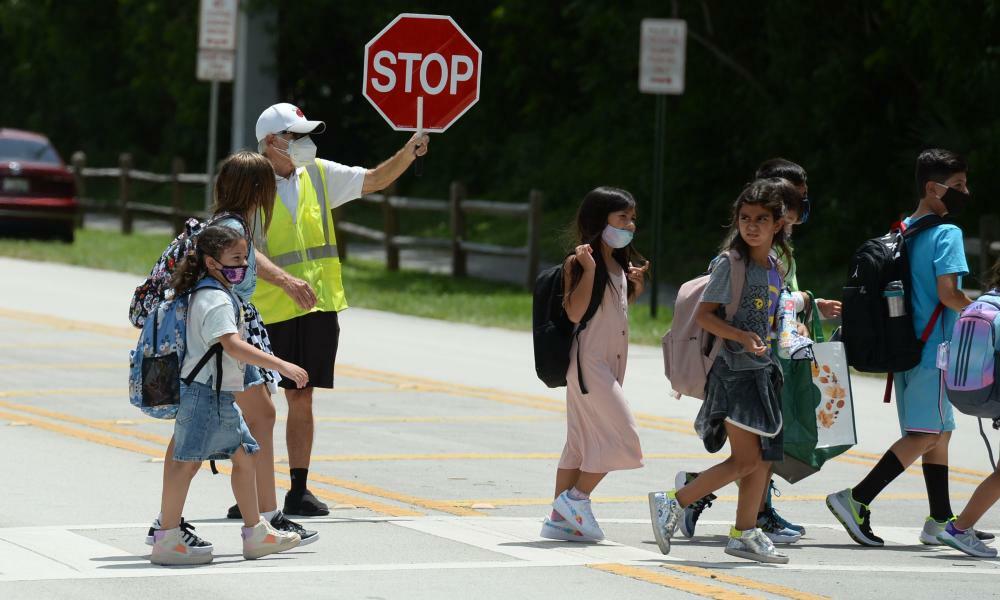 As millions of children head back to school across the US, health experts are highlighting a troubling trend: hundreds of thousands of them are testing positive for Covid.

More than 250,000 children had new cases in the last week of August, the American Academy of Pediatrics said in a report published on Tuesday. That’s the highest weekly rate of new pediatric cases since the pandemic began, and it’s a 10% increase in two weeks.

With slightly more than 1m new Covid cases reported in the US during that period, that means one of every four new cases in the country was among children.

Children’s hospitals are straining under the spike in cases. About 2,500 children were hospitalized with Covid-19 in the week up to 6 September, which is also more than ever before, data from the US Centers for Disease Control and Prevention shows.

A total of 750,000 children tested positive between 5 August and 2 September, the AAP said.

Over the course of the pandemic, 5 million children in the US have tested positive for Covid-19 and at least 444 have died, the AAP said.

The CDC released a report on 3 September showing a fivefold increase in child hospitalization rates because of the Delta variant. The differences in children’s hospitalizations were even more startling when broken down by age. In the same June-August time period, hospitalizations were 10 times higher for children under the age of four and for those between the ages of 12 to 17, the report said.

Hospitalization was 10 times greater among unvaccinated than vaccinated children, the report said. In the US, children aged 12 and up are eligible for vaccination.

“It’s very important for children who are eligible to be vaccinated,” Dr Mary Caserta, a professor of pediatrics at the University of Rochester medical center and a member of the AAP’s committee on infectious diseases, told the Guardian. “There’s just no other way to protect ourselves right now except using vaccination along with mitigation – wearing masks, washing our hands, trying to maintain our social distance.”

“We all need to be vigilant about making sure we’re using all of the tools available to protect ourselves, to protect our community,” Caserta said.

Less than half of eligible children are fully vaccinated, however, and the number of kids receiving their first dose has declined for the third week in a row.

And children under the age of 12 are still not eligible for vaccination. In August, the AAP urged the FDA to expedite the emergency authorization of vaccines for children under 12.

In the meantime, high vaccination rates among those who are eligible can help suppress the spread of Covid among children who are not. Although hospitalization rates for children climbed from June to August, they were lower in states with higher vaccination uptake, another CDC report from 3 September found.

Caserta calls this “cocooning”, where all the adults and eligible children form a ring of protection around those who can’t yet be vaccinated.

Children’s hospitals have also been overwhelmed with a concurrent rise of other respiratory infections, including RSV, flu and rhinoviruses, which is putting further strain on health systems’ ability to treat patients.

All states have seen an increase in cases, but the numbers have been uneven throughout the country, with 11 states reporting more than 150,000 pediatric cases and three states with fewer than 10,000 pediatric cases last week. Tennessee, South Carolina, Rhode Island, North Dakota, Arkansas and Mississippi have the highest cases per 100,000 children, according to the AAP.

More than 1,400 schools in 35 states have already closed for in-person attendance this school year, ranging from one day to a few weeks, because of sharp rises in cases, according to the data service Burbio. Most of those schools moved to remote learning, although instruction for some schools was entirely paused.

The CDC recommends the universal use of masks in schools, regardless of vaccination status. In a White House briefing in late August, the CDC director, Rochelle Walensky, highlighted the schools not following this advice, noting that “most of the places where we’re seeing surges and outbreaks are in places that are not implementing our current guidance”.

Nine states have banned mask requirements in schools, preventing districts from setting their own mandates. Masks are required in schools in 16 states and the District of Columbia. In all other states, districts are allowed to set their own rules about wearing masks in school.

In Florida on Wednesday, a judge ruled that the state was not allowed to prohibit school districts from mandating masks. ​​“We’re not in normal times. We are in a pandemic,” the judge said, noting that masks are effective at blocking transmission of the virus. In Miami, 13 teachers have died of Covid-19 since the school year began three weeks ago.

The Delta variant is significantly more infectious than previous variants, but it’s unclear whether it makes children sicker. Adults are twice as likely to be hospitalized with Delta versus the Alpha variant, a new study from the UK shows.

Even as the virus changes, Caserta said, the tools that protect us stay the same. “We’re going through a different part of the pandemic, but we have to rely on what we know works.”

• This story was amended on 9 September 2021 to delete an incorrect reference to the number of children admitted to hospital in recent weeks.