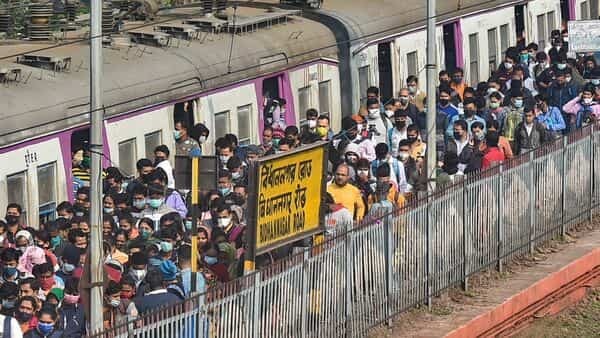 KOLKATA : The cumulative weekly positivity rate of Covid-19 in Kolkata has reached 60.29 per cent, the second highest in the country, the Union Ministry of Health and Family Welfare (MoHFW) said on Wednesday.

The same rate for the week ending January 11 for Howrah district of West Bengal is also very high - 50.89 per cent, according to the MoHFW data.

Kolkata on Wednesday accounted for 7,060 cases, 495 more than what was reported on the previous day, the state health department said in a bulletin.

Howrah district, on the other hand, reported 1361 fresh Covid-19 cases on Wednesday. The figure was 1815 on Tuesday.

Twenty-three deaths due to coronavirus were reported in the last 24 hours taking the death toll to 19,959.

North 24 Parganas district registered eight such deaths while Kolkata reported seven. Two fatalities each were recorded in Howrah and Uttar Dinajpur. One death each was reported from Paschim Bardhaman, Purba Bardhaman, South 24 Parganas and Darjeeling districts, the bulletin elaborated.

Since Tuesday, 8,117 patients recovered from the disease while the discharge rate now is 92.51 per cent. So far, 16,81,375 people have been cured of the disease in West Bengal.

On Wednesday, at least 4,78,026 Covid vaccine doses were administered in the state, a health department official said.

"Altogether 86,118 doses of the vaccine were administered to the 15-18 years age group besides, while 38,215 booster doses were given to those eligible for it during the day," he said.