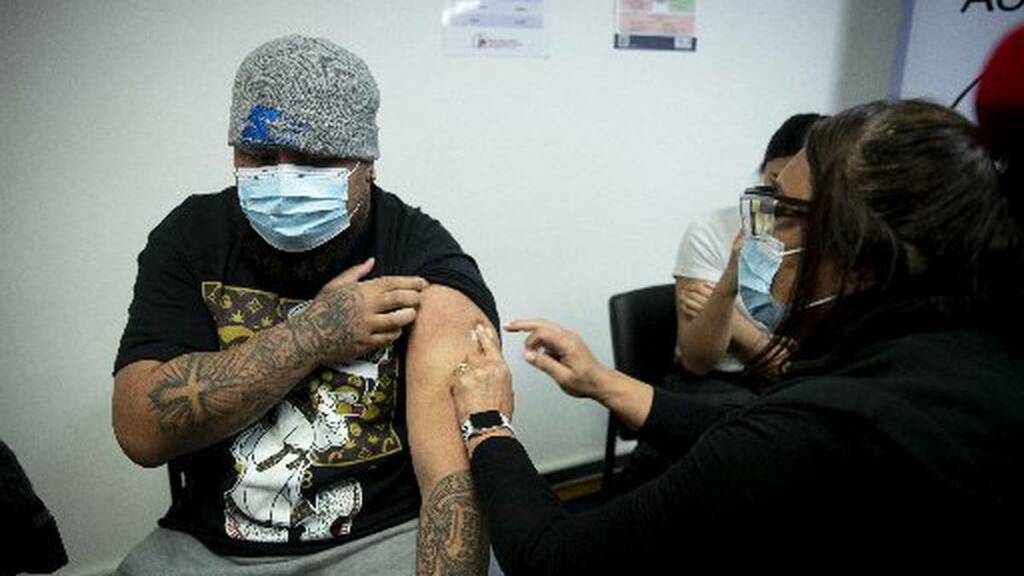 Dozens of Assemblies of God church members tied to the biggest cluster in Auckland's Covid outbreak were vaccinated today after getting out of isolation.

Many shared, while getting their jabs today, how hard it had been watching their church family get sick over the past few weeks and how they had all supported each other.

More than 500 people from 27 Samoan AOG congregations gathered for a conference in Māngere last month - an innocent event that became a super spreader event for the highly contagious Delta virus.

At least 363 people linked to the August 15 conference have since tested positive for the virus, and many have gone into MIQ or hospital.

But even those who didn't test positive have been locked down at home for the past two weeks awaiting their test results.

Today many were finally able to get vaccinated against Covid-19.

Junior Fuimaono, 23, has been at home in isolation for two weeks with his family, including their father who is a pastor at the Panmure branch of the Samoan AOG.

Fuimaono works for South Seas' Healthline and has been working from home - but it's been hard with 10 people in his bubble.

He got his first jab today along with younger siblings Livingstone, 14, William, 16, and Holy, 18.

"It was alright," he said after getting his vaccination. "I was pretty nervous at the start. I'm not good with needles."

But he had a message for others who felt that way: "I'd encourage them to get their vaccinations - just to work together and to help out each other. Also through the pandemic, to stand in unity."

He hadn't been bothered by some of the racist rhetoric he knew was out there after the Samoan cluster hit the news.

"At the end of the day we just pray for them, as our pastors tell us to."

A Samoan mum of three, who asked not to be named, was getting her first vaccine today along with her 14- and 15-year-old sons. Her jab was fine, though her boys had been "a bit dramatic" about the needle.

The family attend the Māngere AOG and were considered close contacts of the original case so have been isolating at home until now. That's been tough, she said.

"My kids enjoyed it - for me it was a challenge trying to organise shopping and things like that."

The boys' school, Otahuhu College, had been linked to the Delta outbreak, which had meant a delay in devices being delivered.

Her isolation period had finished last week as their last known contact was the church event.

"It does get overwhelming especially when you know that a lot of them are your close contacts," she said. "When you've got a good relationship with a lot of the church members it does get more personal - it hits closer to home."

Getting vaccinated as a group today had been "so good". "Knowing that we are in it together, this does truly illustrate that - we are actually here to support one another, we're not leaving others in the lurch and not caring. This goes to show that church can be family."

Sonyah Tuiala is part of the AOG church's crisis management team, set up to help get the church through the outbreak. They are looking after the people in isolation and MIQ and making sure they have support.

She's been encouraging their church family to get vaccinated once they are out of isolation - and got her first jab herself today.

"All those who have got negatives for their last two tests could come through today."

Many others had to wait as they had already had their first shot.

"We just encourage them - it's up to them whether they want to come in or not but it's good to be on the safe side."

Everyone knew someone who had Covid-19 now. "It's been so emotional for us in the past few weeks," she said. Church members had been praying and fasting and helping each other out with phone calls and delivering food where it was needed.

They were happy to see some people who had been unwell were beginning to recover, she said.

South Seas Healthcare chief executive Silao Vaisola-Sefo said today's event had gone well.
Church members had been pushing to get tested as soon as they were able.

The trust has been running church-by-church vaccination events in since April, often bringing church members in buses, but had to stop when the country went into lockdown.

"We've had pop-ups in churches, we've had mobile [clinics], it's always been there. We get numbers too, but then the challenge is scaling up."

One pre-lockdown "pop-up" vaccination event at a Samoan church had give around 700 people a jab over two days.

The Mangere AOG had put together a crisis management team who were organising church members to get vaccinated and make sure they were supported while in MIQ or self-isolation.

"Get the community involved, they will organise their people."

The Māngere church group represents at least 363 cases of the 841 cases identified in the country's latest outbreak.

The combined service was held at 33 Andrew Baxter Drive between 9am and 3pm.

The quick spread of the Delta variant through the church community was not unexpected especially given that many Pasifika and Samoan families are made up of multi-generational households.

The Birkdale social network is the second biggest cluster with 76 people including the Devonport man who was the first case to be identified in the latest community outbreak.

Under level 4 rules, people are allowed to leave their homes to get tested and vaccinated.