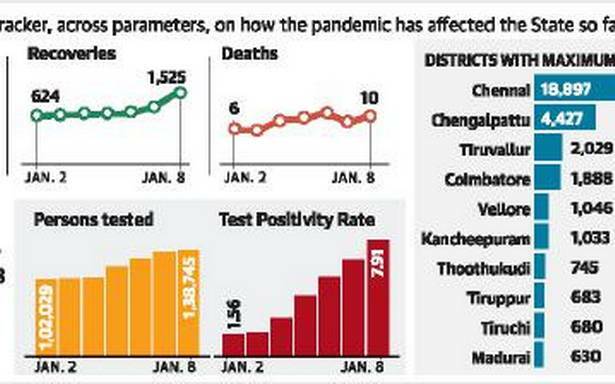 Fresh COVID-19 infections crossed the 10,000-mark in Tamil Nadu, nearly 46% of which were reported in Chennai. With a total of 10,978 persons testing positive for COVID-19 in the State, the overall positivity rate rose to 7.9%.

Health Minister Ma. Subramanian said while cases were rising rapidly, nearly 2,000 being added every day, the situation was not alarming, and the health infrastructure was sufficient.

“At the Government Corona Hospital, there are 260 in-patients. Young persons, who are asymptomatic, are being discharged in a day and advised seven day home isolation, while elderly persons with co-morbidities are being admitted. So, only those who require treatment are being admitted. and the remaining are in home isolation,” he said, and added that a meeting to discuss precautionary measures would be held on January 10. The surge in daily COVID-19 cases pushed the State’s active caseload to 40,260.

Of these, Chennai had a total of 20,369 active cases. Daily COVID-19 cases continued to rise across the State, with only Ariyalur reporting fewer than 10 cases. Chennai’s daily tally soared to 5,098. Chengalpattu followed with 1,332 cases, while there were 591 cases in Tiruvallur and 585 cases in Coimbatore. Cases increased in Madurai as 314 persons tested positive, while Kancheepuram had 309 cases. There were 243 cases in Vellore and 237 in Tiruchi. Tiruppur and Thoothukudi recorded 226 and 202 cases respectively. There were 100-plus cases in Virudhunagar, Villupuram, Tirunelveli, Salem, Ranipet, Kanniyakumari and Erode.

The new cases pushed the State’s overall tally to 27,87,391. The State recorded 10 deaths, taking the toll to 36,843. There were no deaths in 35 districts. There were six deaths in Chennai and two each in Chengalpattu and Kancheepuram. A total of 1,525 persons were discharged after treatment. A total of 1,39,253 samples were tested in the State.

Health Secretary J. Radhakrishnan said that the testing was gradually increased to 1.39 lakh, with the State’s capacity increased to 3.25 lakh. “As per the Central Government guidelines, instead of testing asymptomatic contacts, we have been told to test those who have symptoms. We have told all district Collectors to take up focused testing of symptomatic persons,” he said. The number of persons who tested positive for Omicron rose to 185 of which 68 had no links with international travellers. Of them, 179 were discharged from hospitals and six cases were notified to Kerala, Puducherry and Andhra Pradesh.

Veteran CPI(M) leader N. Sankaraiah has been admitted to the Rajiv Gandhi Government hospital after testing positive. Chief Minister M.K. Stalin, who inquired about his health, said a separate team had been constituted to monitor the health of Mr. Sankaraiah.