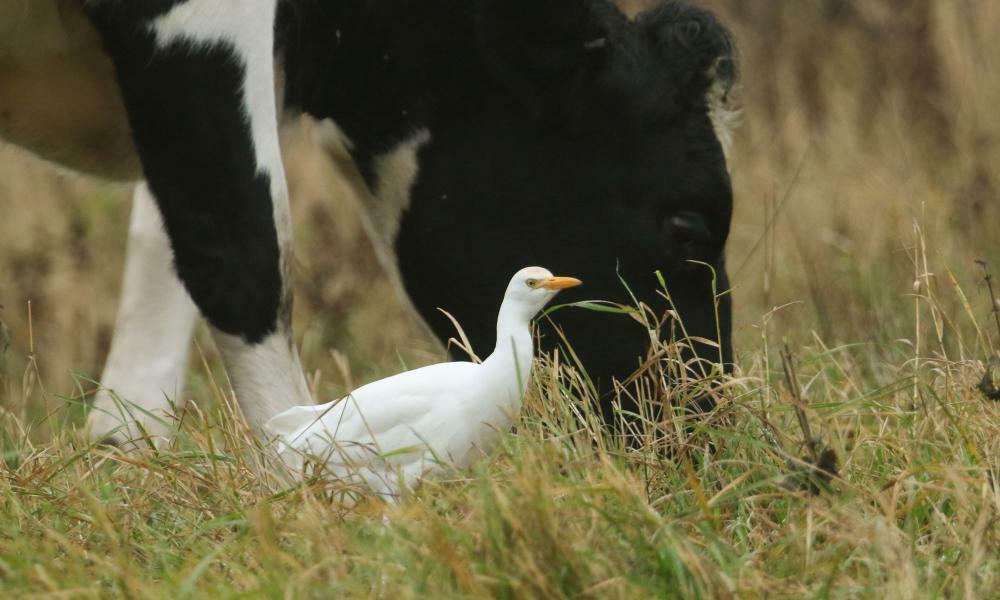 We walk in single file along the narrow path that runs along the bank, overlooking the harbour. It’s not the first time that our local RSPB group has met for a walk in the last six months, but there’s a sense of revived camaraderie as we catch up with the latest news and point out birds and butterflies to one another.

To the south, glinting in the low evening sun, the water in the harbour is dropping as the tide goes out. Clouds of sand martins swirl above our heads, chattering away as they feed on the rising flies in the breeze. There are just a few lingering swallows among them. Waders are flying in to land, hungrily stabbing the emerging mud for worms. Among the redshanks, dunlins and curlews is a grey plover with its black, white and grey “judge’s wig” plumage.

In a field, about 20 white cattle egrets walk around the feet of a herd of cows, picking at the invertebrates disturbed by the cattle. Occasionally, when a cow moves suddenly, an egret flaps its wings and dances to one side to avoid being kicked. Most of the cattle egrets are adults, still showing their summer orangey crests, but at least four of the birds are young – fledged this year – without the orange feathers. All are thicker-set, with squatter necks than little egrets, with heavier, pale beaks.

The cattle egrets began to congregate on the Selsey peninsula in large numbers in the winter a few years ago, before some started to nest and breed at Pagham Harbour in 2020 – the first time in Sussex. Cattle egrets first bred in Britain in 2008, in Somerset, and in Hampshire for the first time in 2019. This year, it is thought that seven pairs nested and at least 10 young fledged at Pagham.

Yellow wagtails rise from the long grass, flicking their long tails, and drop back down again. They, too, are feasting on the insects being stirred up by the cattle. Some wagtails flit over our heads with the martins, tweeting sweetly, and then fly back to the field to feed before they head south.