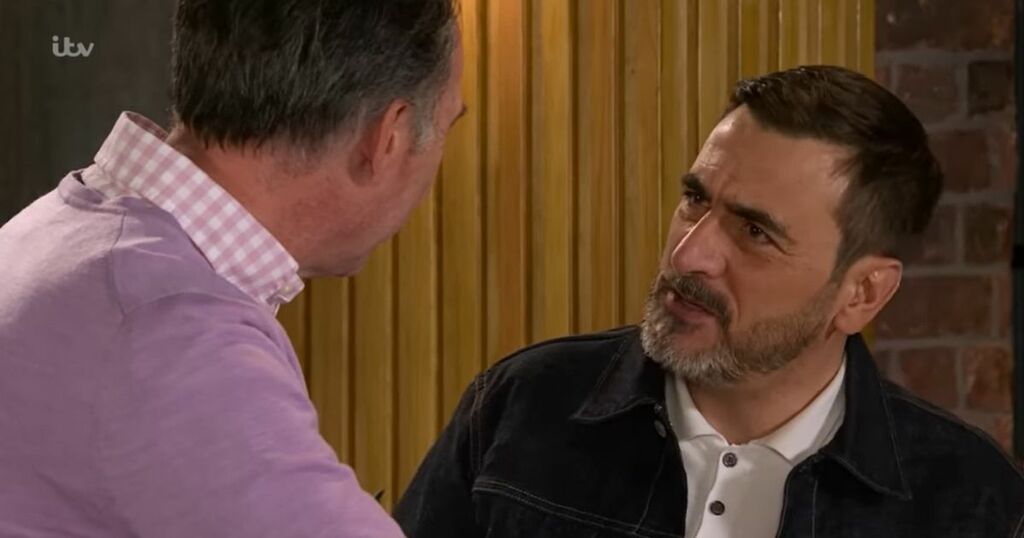 The recovering alcoholic received some shocking news in the ITV soap

Corrie fans horrified over Indecent Proposal storyline for Carla Connor and ask 'what do you think you're doing?'

Coronation Street fans reacted in horror as Carla Connor became embroiled in a Indecent Proposal-style scenario with a 'slimeball' surgeon. In Monday's episode Peter Barlow and his wife were disgusted to discover that surgeon Mr Thorne had rushed Peter's liver transplant operation last year for a bet.

And they were in for another shock when the investigating manager told them that Mr Thorne had also taken a selfie with Peter's liver in the operating theatre. Recovering alcoholic Peter was so enraged by the news he punched Mr Thorne and was arrested for assault.

In Wednesday night's episode of Corrie the story took another dark turn when, on behalf of Peter, Carla tried to make amends with Mr Thorne. But as she pleaded for him to have mercy on her husband she was shocked when he asked her to dinner.

After saying no to the date, reluctantly she gave him her number on the basis he could call her as he considered dropping the charges against Peter. And viewers rushed to Twitter as they compared the plot to the 1993 classic film Indecent Proposal in which a couple's marriage is disrupted by a stranger's offer of a million dollars for the wife to spend the night with him, starring Robert Redford, Demi Moore, and Woody Harrelson.

@penniless_poet tweeted: "I know Carla has a look of Demi Moore but keep your slimy paws off her dirty doc." @Kaffff asked: "Is Carla gonna be in an Indecent Proposal type situation?" And @homebrew19721 said: "Bet the creepy consultant is going make Carla an indecent proposal."

@HelenLDeakin begged: "No, Carla. DON'T trust the sleazy surgeon." @AndyGibsonTV asked: "Carla, what exactly do you think you're doing?" And @Clawmaw exclaimed: "Why on earth did Carla give her number to that fool? This won't end well!"

@GrocottJanice said: "That was a foolish thing to do Carla." @sophie_writer1 wrote: "Mr Thorne is the slimiest slime ball that the street’s seen in a long time." And @alisonsdani demanded to know: "Carla babe!! What are you doing!"

Mr Thorne offered to drop the charges against Peter and retire with immediate effect if, in return, he withdrew his complaint with the hospital. And everything looked like it was going Peter's way until Carla accidentally left her phone behind.

Peter was horrified to see a text message flash up from Mr Thorne telling her he looked forward to their dinner and he angrily asked Carla: "What did you offer him in exchange?" And as she tried to explain he said angrily: "He thought he could get into your pants."

Later Peter reluctantly went to the hospital to say he wanted to withdraw the complaint. But there was another twist when, as he celebrated the charges being dropped in the Bistro with Carla, Mr Thorne arrived for his retirement celebration.

He was fuming to overhear the surgeon announce that he'd landed a new role working abroad. Peter then swore that he would go back to the hospital to reissue his complaint.

Carla ConnorPeter Barlow”ThorneDemi Moore
Sign up to read this article

The recovering alcoholic received some shocking news in the ITV soap