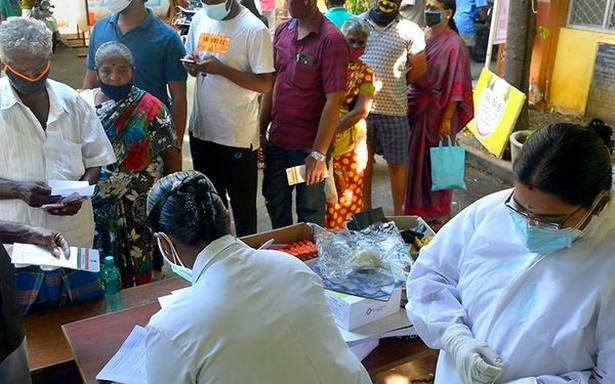 The World Health Organization’s (WHO) approval for the indigenous COVID-19 vaccine Covaxin, developed by the Hyderabad-based Bharat Biotech, is likely to come this month, official sources said on September 13. The WHO has so far approved Covid vaccines developed by Pfizer-BioNTech, US pharma majors Johnson & Johnson, Moderna, China's Sinopharm and Oxford-AstraZeneca for emergency use.

India reported 25,404 new coronavirus infections in the past 24 hours, the health ministry said on September 14. Total cases have now climbed to 33.29 million while deaths have risen to 443,213.

You can track coronavirus cases, deaths and testing rates at the national and State levels here. A list of State Helpline numbers is available as well.

Here are the latest developments:

The Gujarat government on Tuesday extended the night curfew, which is in place in eight cities due to the COVID-19 pandemic, till September 25.

The curfew is currently in place from 11 pm to 6 am in Ahmedabad, Vadodara, Surat, Rajkot, Junagadh, Bhavnagar, Jamnagar and Gandhinagar.

After reviewing the present situation, the state government has decided to extend the night curfew till September 25, a government release stated.

All other restrictions imposed in the last order issued on July 29 will remain in place till September 25, including permitting eateries to function till 10 pm and capping of the attendance at public functions to 400.

The previous order had also allowed Ganesh Chaturthi festivities in public places with the height of idols kept at a maximum of nine feet.

Gujarat had reported only 12 new COVID-19 cases and zero casualties on Monday.

After withdrawing the night curfew and stringent lockdown measures on Sundays, which were imposed in the wake of rising COVID-19 cases in the state, the Kerala government on Tuesday decided to restore Saturdays as working days, wherever applicable.

"All employees are instructed to report for duty (on Saturdays) accordingly," an order issued by the Disaster Management Department said.

It said that on August 4, all government offices, quasi government, public sector undertakings, companies, autonomous bodies and commissions were allowed to work from Monday to Friday with full attendance.

A second city in southeastern China has seen a jump in COVID-19 cases in a delta variant outbreak that started late last week.

The National Health Commission said on September 14 that 59 new cases had been identified in the latest 24-hour period, more than doubling the total to 102. All are in Fujian province on China's east coast.

The port city of Xiamen has confirmed 33 cases in the past two days. Another 59 cases have been found in Putian, about 150 kilometers (90 miles) north on the coast, where the outbreak was first detected. - AP

The focused Covid vaccination drive in the State has ensured that one crore people have been completely vaccinated. The State has administered a total of 3.5 crore vaccine doses.

Andhra Pradesh after achieving 100% vaccination of Healthcare workers, front line workers and people aged between 45 + (with at least one dose) now took up special drive to vaccinate 18-44 age group population.

Over 28.63 lakh people aged between 18-44 were vaccinated in three days of the special drive which took place from September 11-13. The drive received a good response from the public.

Britain's vaccines minister Nadhim Zahawi said on September 14 that the British government had the right to cancel a deal with French drugmaker Valneva to supply a COVID-19 vaccine and had told the company it had done so.

"There are commercial sensitivities around this but we have a right to cancel the Valneva vaccine and that's what we've informed the company we would do," Mr. Zahawi said.

Valneva said on September 13 that Britain had ended a $1.65 billion vaccine supply deal because it had alleged that the company was in breach of its obligations. -  Reuters

Vice President M. Venkaiah Naidu on September 14 expressed delight over India administering 75 crore doses of coronavirus vaccine and urged people to shed hesitancy and get inoculated. "Delighted to know that we have crossed the milestone of administering 75 crore doses of the COVID-19 vaccine as the nation celebrates the 75th year of our Independence. My appreciation to the health workers, government officials and all others for their extraordinary efforts," the Vice President Secretariat tweeted, quoting Mr. Naidu as saying. - PTI

Despite the drastic decline in the number of COVID-19 deaths in the State, the Case Fatality Rate (CFR) continues to be highest in the 90-99 age group. From 11.4% on July 13, the CFR in this age group rose to 12.1% on August 13 and has remained the same since then.

While the fatality rate has remained constant among senior citizens of three groups — above 60 years, above 70, and above 80 — for the last three months, it has seen an increase in the centenarians group, from 4.8% on July 13 to 5.75% on September 12.

Despite their vulnerability, the rate of infection is not very high among senior citizens. Senior citizens have accounted for a mere 14.5% of the total 29,61,735 positive cases (as of September 12). However, nearly 57% of the 37,504 COVID-19 deaths in the State reported till September 12 were from this susceptible group.

Florida Governor Ron DeSantis has threatened fines for cities and counties that mandate employees must get vaccinated against COVID-19, which has killed nearly 50,000 people in the state.

"If a government agency in the state of Florida forces a vaccine as a condition to employment, that violates Florida law," Mr. DeSantis said in a press conference. "And you will face a $5,000 fine for every single violation," he added. "That's millions and millions of dollars potentially in fines."

Florida has recorded more than 3.4 million cases of COVID-19 and over 49,000 deaths, according to a Reuters tally. - Reuters

U.S. and India in talks over timeline for restarting COVID-19 vaccine exports

The United States is communicating regularly with India in bilateral and multilateral channels to discuss the supply of COVID-19 vaccines and inquire about its timeline for restarting vaccine exports, a senior Biden administration official said.

The global pandemic will be a key topic on September 24, when U.S. President Joe Biden will host the first in-person summit of leaders of the "Quad" countries - Australia, India, Japan and the United States.

The visit by Prime Ministers Scott Morrison, Narendra Modi and Yoshihide Suga to the United States will coincide with the United Nations General Assembly in New York, which Mr. Biden will address on September 21. - Reuters

Going by the data available, the daily infection rate of COVID-19 is stabilising in India, but it is still not down, as desired, said Prathit A. Kulkarni from the Infectious Disease Section of Baylor College of Medicine, the USA.

He was speaking at a webinar organised by the Andhra Medical College.

He pointed out that due to the delta variant the average daily infections in India have come down to about 33,000 per day in this month, while there is surge in the USA.

In India it peaked during April to July, but now it is steady and that is a good sign, unless and until if there is a third wave.

Rajasthan Chief Minister Ashok Gehlot on September 13, 2021, said over five crore COVID-19 vaccine doses have been administered in the state.

Of them, 3.74 crore have been administered the first dose and 1.27 crore have got both the doses, he informed.

The Supreme Court on September 13 asked the Centre to reconsider its decision to exclude from its guidelines compensation to persons who committed suicide after being diagnosed with COVID-19.

A bench of Justices M.R. Shah and A.S. Bopanna told Solicitor General Tushar Mehta that it did not prima facie agree with the exclusion of such persons from the purview of compensation.

The top court was considering the fresh guidelines issued by the Centre to simplify the process of issuance of death certificates, as per the directions in the judgment delivered on June 30. - PTI

More than 71 lakh doses were administered on September 13 till 7 p.m., according to the provisional data available on the Co-WIN portal.

The daily vaccination tally is expected to increase with the compilation of the final reports for the day by late night, the ministry said. According to the 7 p.m. provisional data available on the portal, over 57 crore people have been vaccinated with the first dose and more than 18 crore with their second.

The country has also jabbed more than 99% healthcare workers (HCWs) and frontline workers (FLWs ) with at least one shot of COVID-19 vaccine, it said. - PTI