By ROSSELLA TERCATIN AND MAAYAN JAFFE-HOFFMAN 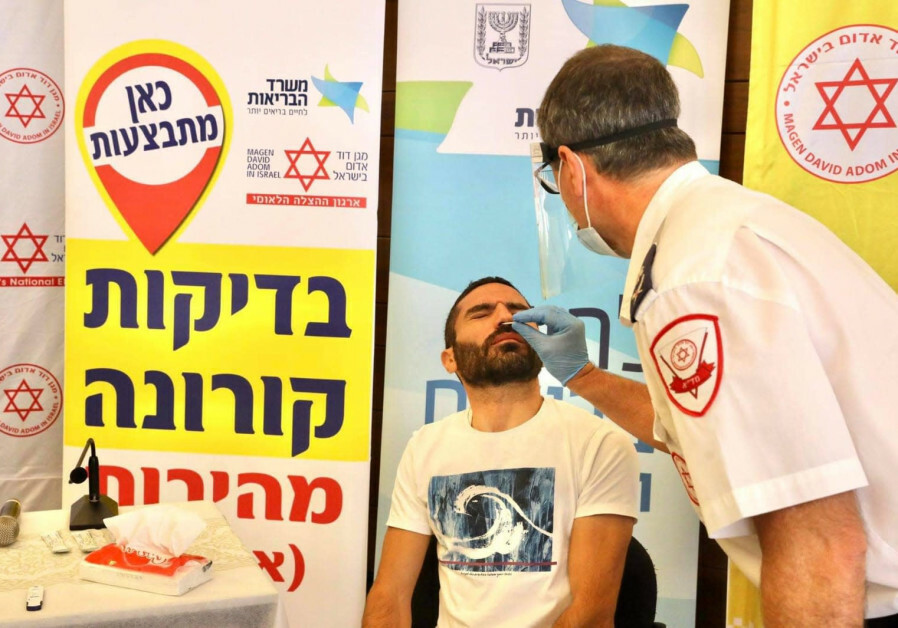 The coronavirus reproduction rate (R) climbed back up to one on Monday, after it had hit as low as 0.8 and appeared to be on the decline. However, the Health Ministry has decided to lift some restrictions on children, according to reports in Israeli media.

The R rate represents how many people each virus carrier has infected on average and it only mirrors the situation of about 10 days before – in this case on September 2, a day after schools reopened.

When the R stands above 1, the disease is considered to be spreading because every case generates more than one case. When it is below 1, it is a sign that the number of cases is decreasing.

“We have not yet beaten the fourth wave,” said coronavirus commissioner Prof. Salman Zarka in a briefing Monday afternoon. “We started the school year with ‘cautious optimism.’ Now we have less optimism and more caution.”

According to the report by the Coronavirus Knowledge Information Center, the rise was to be expected.

“These changes in the value of the coefficient are not surprising, since this period of the holidays is characterized by a large number of events with a high potential for morbidity alongside changes in the scope of testing.”

In the past few days, the number of daily cases has varied greatly because of the effect of the holidays.

“Any time there is a mass gathering without masks there will be infection,” Zarka said. “The virus spreads between people.”

He called on citizens to pray outside on Yom Kippur.

“It is important to understand that there are a lot of people in synagogues – older people with underlying medical conditions, pregnant women sitting in the women’s section,” Zarka said. “It is best to pray outside. But anyone praying inside should wear a mask, the windows should be open and they should social distance.”

He said that yeshiva students would be asked to take rapid antigen tests before heading home for the fast day. Anyone positive will be instructed to stay at his school and observe the holiday there.

Although in general, severe morbidity is flat or only slightly increasing, the country is starting to see a rise in severe infection of individuals who are vaccinated with only two doses and have not yet received a booster shot, researchers from the Hebrew University of Jerusalem showed Monday.

However, the data from the Health Ministry tell a slightly different story.

Each day during the week of August 15 through August 21, there were an average of 299 people hospitalized with serious COVID who had received two shots of the coronavirus vaccine, compared to an average of 171 in the last seven days.

At the same time, the average number of daily unvaccinated serious cases has spiked from 255 to 429.

According to Zarka, the majority of serious cases who had received two shots were those that got their second shot at least six months prior.

Only around 80,000 people over the age of 60 are still unvaccinated. However, they account for about one third of patients in serious condition.

According to the National Institutes of Health, patients are considered to have severe COVID-19 if they have an oxygen saturation level of less than 94% on room air at sea level, a respiratory rate of more than 30 breaths per minutes, a ratio of arterial oxygen partial pressure under 300 mm/Hg, or lung infiltrates greater than 50%.

The total number of patients in serious condition has remained stable for several days at just below 700.

In spite of the fact that only 80,000 people over the age of 60 are still unvaccinated, about one third of the patients in serious conditions belong to this group.

Younger individuals are not rushing out to get a third shot. According to the most recent data published by the Health Ministry, fewer than half (43%) of people between the ages of 40 and 49 have gotten a third shot, under one-third (30%) of people 30 to 39, and less than one-fourth (23%) of people 20 to 29.

According to Channel 12, starting on Tuesday the ministry will stop requiring children under 12 to present a Green Pass to access outdoor swimming pools. From next week, they will also be able to go to outdoor restaurants and tourist attractions without a Green Pass – which requires them to undergo a test, since they are too young to be vaccinated.

Also on Monday, the Knesset Labor and Welfare Committee approved the extension of the regulations requiring Israelis to wear masks outdoors at crowded gatherings and for a parent to enter isolation with a young child positive to the virus.